On 1 October 2020, a Boeing 787-9 was approaching the top of descent when the cabin crew discovered a mobile phone crushed in a flat bed seat which had just been changed to the seated position for landing. A fire which had started was extinguished and the Captain declared a ‘PAN’ to ensure the fire service attended the arrival. The Investigation noted that there are currently no seat design requirements to prevent electronic devices from becoming trapped in seats and that it is proving challenging to find a workable solution. A Safety Recommendation to improve seat design regulations was made.

On 1 October 2020, a Boeing 787-9 (G-ZBKF) being operated by British Airways on a scheduled international passenger flight from Miami to London Heathrow was level at FL 420 and approaching the top of descent when cabin crew removing bedding found that a mobile phone which had been crushed in the lie-flat seat when it was returned to the seated position and was on fire. The fire was extinguished and the device was left in situ with a member of cabin crew and an extinguisher positioned nearby in case of re-ignition. This did not occur and the remains of the device were removed by RFFS personnel after landing.

A Field Investigation was carried by the UK AAIB.

Approximately 40 minutes prior to landing, the flight crew made a PA which woke one of the passengers who was asleep on a First Class flat bed seat. This passenger subsequently returned their seat to a more upright position before going to the washroom.  Having checked if she could stow the bedding whilst the passenger was away from her seat, one of the cabin crew did so and on detecting a strong “sulphur-like” smell noticed a mobile device charging cable running from the seat socket and disappearing down the side of the seat. The smell was getting stronger so she called the SCCM and they subsequently both heard a “hissing” sound and a large plume of grey smoke appeared from the seat in a “tornado” motion and an orange glow became visible in the seat area amongst the smoke. The seat power was switched off and the SCCM donned fire gloves and, after pulling back the seat padding and exposing a device trapped in the seat mechanism, discharged several bursts of BCF towards the device.

Meanwhile, a third crew member used a water extinguisher to fill an ice bucket with water and then contacted the flight crew to advise them of the situation. The flight crew subsequently stated that shortly before receiving this cabin crew call, they had detected an “acrid odour” on the flight deck. The cabin crew stated that “thick smoke was emanating from a seat in the forward cabin and that they had initiated their fire fighting drill”. The operating flight crew responded by commencing their ‘smoke, fire or fumes’ checklist and evaluated their diversion options whilst the relief First Officer went back into the forward cabin to assist.

Once the BCF extinguisher had been discharged, the smoke quickly dissipated and the crew were able to clearly see a red mobile phone trapped in the seat mechanism. They attempted to remove it but it was jammed. They noted that very little heat was coming from the device and a check for secondary heat sources did not find any.

On receiving an update, the Captain decided that since the source of the smoke had been identified and extinguished and the aircraft was now only 20 minutes from landing at Heathrow, the appropriate action was to continue to Heathrow. He made a PAN call to alert ATC and ensure that the RFFS met the aircraft on landing, gave a NITS briefing to the cabin crew and made a further passenger PA. One of the cabin crew remained in the vicinity of the seat involved with an extinguisher available for the remainder of the flight which was without further event. After landing, RFFS personnel boarded the aircraft and removed the phone from the seat. 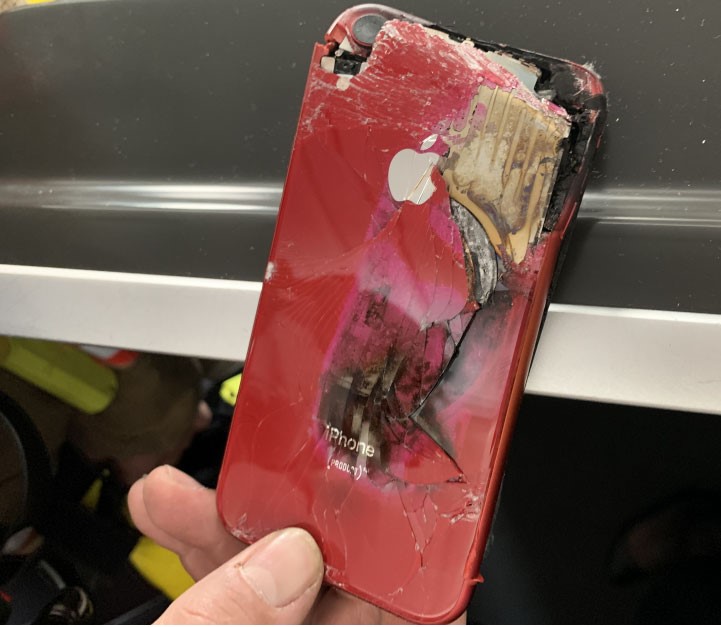 The burnt phone after retrieval from the seat by fire service personnel. [Reproduced from the Official Report]

The Investigation noted the comprehensive information on the potential safety issues arising from the presence of all PEDs (portable electronic devices) on aircraft provided in the company OM. This detailed procedures restricting the way they are used in flight aimed at preventing both over charging and damage caused if activation of seat adjustment mechanism damages an inadvertently trapped device. A series of passenger PAs which must be made at specified points during each flight are also detailed and specific instructions are provided in respect of the response to any PED fire.

The Operator’s internal Investigation identified two matters which it deemed worthy of review:

The AAIB noted that the seat design involved was approximately ten years old and whilst it was explicitly designed to limit the chances of a PED becoming trapped and had since been modified to mitigate this risk, it was (and remains) challenging to remove the risk completely. It was also noted that over the last ten years, PEDs have become smaller, batteries have become more powerful and the number of such devices passengers are likely to carry has increased.

The UK CAA MOR database was consulted to establish the extent of similar PED events and it was found that over the last five years there had been 166 reports of PED’s becoming trapped in passenger seats with 42 resulting in a fire or smoke in the cabin.

The current complete absence of any CAA, EASA or FAA regulatory requirements to require seats to be designed to prevent passenger PEDs from becoming trapped or crushed was noted. Following this Investigation by the AAIB, it was noted that the EASA has requested the SAE International Seat Committee to develop design standards and/or recommended practices to address the issue and has advised that this committee intends to update the “Aircraft Seat Design Guidance and Clarifications document (SAE ARP 5526)” and incorporate it in an initial release of a “Performance Standard for Seat Furnishings in Transport Aircraft document (SAE AS6960)” with publication of these documents planned for “late 2021”.

One Safety Recommendation was made as a result of this Investigation as follows: