On 22 September 2021, a Boeing 787-9 was found on arrival at its destination, Los Angeles, to have completed the 14½ hour flight from Melbourne with all four fan cowl static ports taped over. The crew had not observed any adverse consequence. The Investigation attributed the oversight to inadequate pre-flight maintenance and operational procedures and found that failure to identify the taping had resulted in the aircraft departing with reduced redundancy to the engine electronic control systems of both engines.

On 22 September 2021, a Boeing 787-9 (VH-ZNJ) being operated by Qantas Airways on a non-scheduled international cargo flight from Melbourne to Los Angeles completed an uneventful flight to its destination where it was discovered that tape covering four fan cowl static ports had not been removed before the aircraft departed. No safety-related consequences of this oversight were detected in flight but it was considered that an Investigation was required to establish such consequences and establish how the oversight had occurred to ensure repetition could be avoided.

An Investigation into the accident was carried out by the Australian Transport Safety Bureau (ATSB). Relevant data from the aircraft DAR was available in support of the Investigation. Information about the five pilots on board the flight was not recorded.

The aircraft arrived at Melbourne from Los Angeles in the late afternoon of 20 September and was parked on Domestic Bay 11, where it remained until its planned departure to Los Angeles on the morning of 22 September. Qantas required that where an aircraft was on the ground for less than 72 hours, it was subject only to ‘normal’ parking procedures.

The following day, an engineer was tasked with attending to these ‘normal’ parking procedures which included fitting pitot covers and covering the static ports in accordance with the Boeing AMM procedure for an aircraft to be parked for less than 7 days which was to be completed within three days of a landing. This procedure required that covers be fitted to all static ports, of which the 787 has a total of 14 - 6 on the fuselage, 4 on the engine fan cowls and 4 on the vertical fin (see the illustration below). This recommended using grease proof paper secured by high visibility adhesive tape sealed at the top, sides and base of each port leaving an opening at the bottom for moisture to drain. It was noted that these particular AMM procedures were guidance rather than mandatory allowing operators to use alternative methods which ensure that aircraft and engine systems are adequately protected. The AMM also recommended that placards stating “pitot probes and static ports covered” should be fitted to the left side control column and removed during the pre return to service ‘restore’ procedure without referring to the location of the 14 static ports.

The task was completed in respect of the fuselage and fan cowl ports but in the absence of an elevated working platform, the vertical fin port covering was deferred with an entry in the Aircraft Technical Log. Later the same day, another engineer was tasked with completing the corresponding ‘restore’ procedure in order to return the aircraft to flight status. With the assistance of another maintenance engineer, he uncovered the pitot and fuselage static ports but was unaware that the fan cowl ports had been covered and did not check them. Later on, having noticed the Technical Log entry stating that the vertical fin static ports had not been covered, he returned to the aircraft to make sure that they had not been covered without the entry being cleared.

The following morning, prior to the flight crew arriving at the aircraft, a third engineer was tasked to sign the CRS arrived at the aircraft. This sign off was predicated on ensuring that all outstanding maintenance tasks had been completed and certified for. The CRS procedure did not require them to inspect the aircraft, nor did they do so. 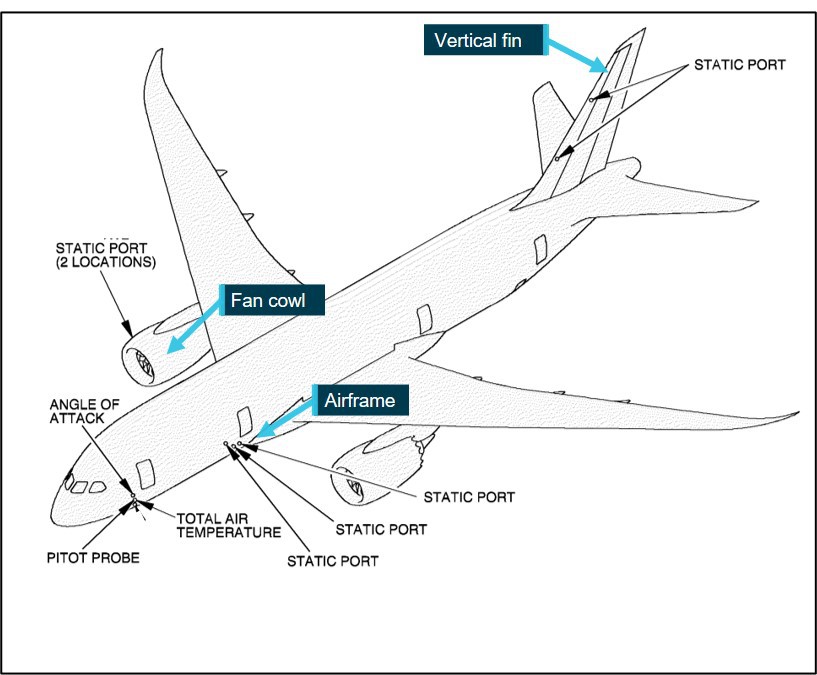 The locations of all 16 static ports (duplicated on the other side of the aircraft). [Reproduced from the Official Report]

Shortly afterwards, the flight crew, which consisted of the captain, two First Officers and two Second Officers, boarded the aircraft and the Captain instructed the Second Officer who was going to be seated in the passenger cabin for departure to carry out the pre-flight external inspection.

The Dispatcher assigned to the departure was employed by a Qantas contractor (DNATA) who were responsible for all Qantas 787 departures from Melbourne. Just prior to pushback, this Dispatcher conducted their required walk round inspection of the aircraft with no findings.

The flight departed and was uneventful, arriving in Los Angeles later the same day (early morning in Los Angeles). A post flight inspection by a Qantas engineer then found that all 4 fan cowl ports were covered (see the illustration below). A review of recorded flight data confirmed that the fact that these ports had been covered had had no effect on the operation of the aircraft during the flight. 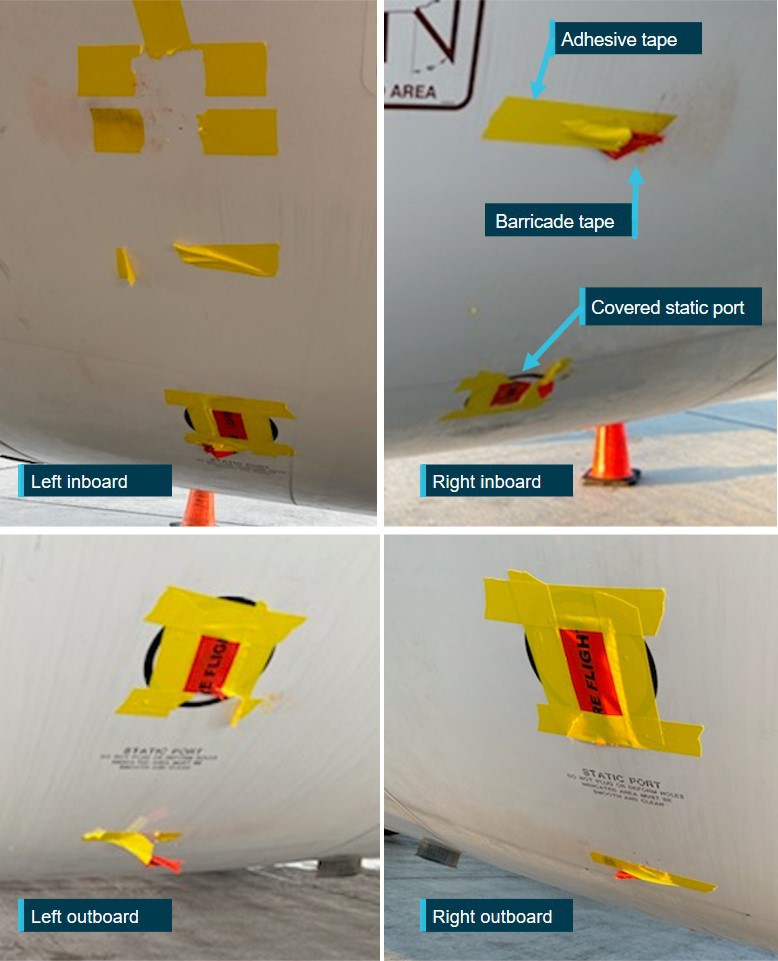 The still covered fan cowl static ports on arrival at Los Angles after the 14 hour flight. [Reproduced from the Official Report]

Qantas Engineering had created Job Instruction Cards (JICs) for both parking, and then restoring an aircraft back to service. The JIC for parking between 24 and 72 hours “prioritised certain tasks from the Boeing procedure” and stated that pitot probe and static port covers were to be installed “as soon after arrival as possible”. The JIC instructions to “cover the static ports” and to “attach static ports covered tag” referred to the applicable section in the AMM with Qantas using a locally manufactured sign for the flight deck which combined the two tags into one placard which could be hung from the control column. The JIC also contained the warning “when there are covers on the [fuselage/ADRS] static ports, make sure that personnel can see that condition from the ground”. The JIC for restoring the aircraft prior to flight included the removal of all tapes used to secure static port covers and included “a warning of adverse outcomes if these covers were not removed prior to flight”.

The engineer who was sent to the aircraft later in the day when all the static port covers except the vertical fin one had been fitted in order to remove them in preparation for the following mornings departure made a number of observations to the Investigation including the following:

The guidance to pilots in respect of their pre flight external check was reviewed. It was found that whilst the FCOM included a diagram of the inspection route to be followed which clearly included both sides of each engine and stated that all probes, sensors, ports, vents and drains (as applicable) must be checked clear and not undamaged, the brief description of the major components of the ADRS in the FCOM only stated that there were “6 static ports, 3 on the left and 3 on the right side of the airframe”. There was no mention anywhere in the FCOM of the fan cowl (or vertical fin) static ports.

The DNATA ‘pre-departure walk round inspection’ procedure was found to be limited to checking ground equipment was clear of the aircraft and that all doors were closed using a route similar to that illustrated in the FCOM with no mention of any static port covers. It was noted that their walk rounds were supposed to follow those in the Qantas ‘Ramp Operations Manual’ but this also made no reference to any static covers or gave any guidance about ‘tape’ and what to do if it was observed.

The Investigation made a 'Safety Analysis’ of the assembled evidence which concluded that the event was the result of multiple factors which, in summary, were as follows:

An Additional Factor that increased risk was also identified as:

Safety Action was advised to the Investigation to have been taken included the following:

The Final Report was released on 17 May 2022. No Safety Recommendations were made.