On 6 June 2020, a Boeing 787-10 on approach at Abu Dhabi began a low go around from an RNAV(RNP) approach when it became obvious to the crew that the aircraft was far lower than it should have been but were unaware why this occurred until an ATC query led them to recognise that the wrong QNH had been set with recognition of the excessively low altitude delayed by haze limiting the PAPI range. The Investigation found that advice of MSAW activations which would have enabled the flight crew to recognise their error were not advised to them.

On 6 June 2020, a Boeing 787-10 (A6-BMD) being operated by Etihad Airways on a non- scheduled international cargo flight from Beijing to Abu Dhabi as EK9878 with an augmented crew was on short final to runway 31L at destination in day VMC when the Captain observed that the PAPI was showing all red and instructed the First Officer acting as Pilot Flying to go around. Whilst the flight was positioning for a second approach, ATC asked the crew to check their QNH setting and they discovered that they had unknowingly set the QNH incorrectly prior to making the first approach. MSAW alerts triggered during the first approach by the incorrect altimeter setting were not advised to the flight.

A Serious Incident investigation was carried out by the UAE GCAA Air Accident Investigation Sector (AAIS). Relevant data were available from the FDR component of both the installed EAFRs and from recorded ATC data but relevant data on the CVR component of the EAFRs was overwritten before the seriousness of the event was recognised which was only after the Captain’s post flight ASR reporting the event was correlated with the OFDM process.

A little over seven hours after departing from Beijing, where the QNH setting was 1009 hPa, the flight commenced descent from FL 360 with the First Officer as PF. On initial contact with Abu Dhabi APP, the crew confirmed receipt of ATIS information ‘India’ by uplink and that they were following the EMERU 2D STAR. Passing FL 170 at a distance of approximately 20nm from EMERU, APP advised the flight to expect an (RNP AR) RNAV ‘Y’ approach to runway 31L. The Abu Dhabi QNH was not provided verbally by ATC but the ATIS received earlier included a QNH of 999 hPa. Whilst it became clear to the crew that they had both inadvertently overlooked the Flight Crew Operations Manual (FCOM) requirement to preset the arrival QNH on receipt, the circumstances which had led to this were unclear. The fact that Relief First Officer occupying the main flight deck supernumerary crew seat had been in an ideal ‘oversight’ position but had not noticed the evident omission was noted.

The flight subsequently established on the RNAV ‘Y’ approach as cleared with the First Officer as PF. As the aircraft descended through 2,670 feet indicated altitude, the radio altimeter became live showing 2,500 feet and the auto callout of “2500” occurred. It was noted that “normally, the difference between the pressure altitude with a correct QNH setting and the radio altitude at Abu Dhabi is less than 100 feet”. Thereafter, the indicated (but incorrect) pressure altitude continued to be higher than the radio altitude with the difference between 150 and 380 feet but went unnoticed. Soon after this, the flight was transferred to TWR although the controller had to repeat the frequency to get a correct readback of it. As the aircraft descended through the (incorrect) indicated altitude of 1,790 feet (1,470 feet radio altitude), the flap lever was moved from the 20 to the 25 detent which completed configuration for landing. TWR was contacted and the flight was instructed to continue the approach. Twenty three seconds later, landing clearance and a wind check were given and after a repeat, it was acknowledged as the aircraft passed 1,000 feet radio altitude with its altimeters showing 1,350 feet. Passing 500 feet radio altitude, the indicated altitude showed 860 feet. The AP was disengaged when the aircraft passed 660 feet indicated altitude (280 feet radio altitude). Only at this point did the Captain become aware that the PAPI was showing four reds and realising that “something was not right” had ordered an immediate go-around. The FDR recorded the TOGA mode becoming engaged when the aircraft was at approximately 1.3 nm from the runway 31L threshold with the (incorrect) indicated altitude showing 570 feet and the radio altitude indicating approximately 210 feet. The lowest recorded height once the go around had been initiated was 202 feet. It was noted that the First Officer had been aware of the all-red PAPI at the time the Captain had called for a go around but had not remarked on this abnormality or called for a go around himself. At this stage, there was no crew understanding of the reason for the premature descent.

As the aircraft, now back with APP, was approaching the 4000 feet stop altitude applicable to the standard missed approach procedure, the controller informed the flight that the QNH was now 998 hPa and requested the crew to advise when read for radar vectors to an ILS approach to runway 31L. The Captain replied that they were ready for a second approach but did not read back the QNH. The aircraft was then levelled off at an aircraft-indicated 4,000 feet QNH and the APP controller, seeing that the aircraft was actually at 3,700 feet QNH, asked the flight to confirm their altimeter settings. This resulted in the crew realising that they had set the altimeter subscales to an incorrect figure of 1009 hPa instead of the 999 hPa which had been provided on the ATIS when changing to QNH from 1013 prior to the first approach. The correct QNH was set and a corrective climb to 4000 feet was made with ATC formally recording a Level Bust in respect of the missed approach altitude error. The subsequent ILS approach and landing was without further event.

The error made and the procedural and systemic ways it could have been recognised and corrected were considered: 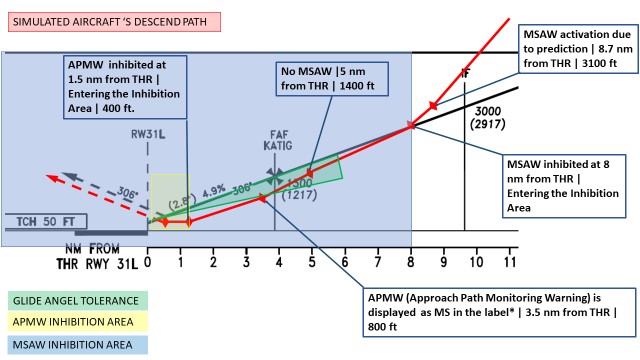 The vertical profile of the RNAV Y procedure compared to the one flown. [Reproduced from the Official Report]

It was of concern that the Investigation was hindered by the absence of CVR data which would have enabled the assessment of flight crews’ procedural compliance, workload, distraction, decision-making, situational awareness and fatigue as potential factors. It was recognised in many events categorised as Serious Incidents, a 2 hour CVR requirement for data retention was often, for various reason, insufficient to ensure availability of CVR data for Investigation purposes. It was noted that the General Civil Aviation Authority as UAE State Safety Regulator was in the process of drafting regulations which would require a recording capability of 25 hours for aircraft with a MTOM of more than 27,000 kg with its Certificate of Airworthiness issued on or after 1 January 2022.

The Cause of the accident was formally documented as “the incorrect local pressure (QNH) altimeter setting (which led to) a go-around when the aircraft was at a distance of 1.3 nautical miles from the threshold of runway 31L after the flight crew had definitely seen four red precision approach path indicator (PAPI) lights”.

Safety Action taken as a result of internal safety investigations after the event and known to the Investigation whilst it was in progress was noted to have included but not been limited to the following:

A total of six Safety Recommendations were issued as a result of the Findings of the Investigation as follows: