On 10 June 1990, a BAC 1-11 operated by British Airways, during climb, experienced sudden explosive depressurisation which resulted in loss of the left hand windscreen. The commander was sucked in the windscreen aperture and was successfully secured by the cabin crew, while the first officer executed a safe landing.

On 10 June 1990, a BAC 1-11 operated by British Airways, during climb, experienced sudden explosive depressurisation which resulted in loss of the left hand windscreen. The Captain was partially sucked into the windscreen aperture but was then successfully restrained by members of the cabin crew, while the First Officer took control and completed the flight without further event.

[…] The co-pilot had been handling pilot during the take-off and, once established in the climb, the commander was handling the aircraft in accordance with the operator’s normal operating procedures. At this stage both pilots had released their shoulder harness, using the release bar on the buckle, and the commander had loosened his lap-strap.

[...] As the aircraft was climbing through about 17,300 feet pressure altitude there was a loud bang and the fuselage filled with condensation mist. It was once apparent to the cabin crew than an explosive decompression had occurred. The commander had been partially sucked out his windscreen aperture and the flight deck door had been blown into the flight deck where it lay across the radio and navigation console. The No 3 steward, who had been working on the cabin side of the door, rushed onto the flight deck and grasped the commander round his waist to hold onto him. […]

The co-pilot immediately attempted to control the aircraft and, once he had regained control, initiated a rapid descend to FL110. He re-engaged the autopilot which had become disconnected by displacement of the control column during the commander’s partial egress and made a distress call on the frequency in use but he was unable to hear its acknowledgement due to noise or rushing air on the flight deck. There was some delay in establishing two-way communications and consequently the Bristol Sector Controller was not immediately aware of the nature of emergency. This led indirectly to the LATCC Watch Supervisor not advising the aircraft operator of the incident, as required by the Manual of Air Traffic Services (MATS) part 1. Consequently the initiation of the British Airways Emergency Procedure Information Centre plan was delayed.

On the flight deck the No 3 steward who was holding onto the captain began to suffer from frostbite, cuts and bruising. He was later relieved by two remaining flight attendants, by this time the commander had already shifted an additional two to eight inches out of the window and began to lose consciousness due to the thin air. The rest of the cabin crew began to secure loose objects, and advise passengers to take up emergency positions.

Meanwhile, the aircraft had descended to FL100 and slowed down to about 150 kts. The co-pilot had requested radar vectors to the nearest airport and had been turned towards Southampton Airport and eventually transferred to their approach frequency. Having verified that there was sufficient runway length available for landing, the co-pilot manoeuvred the aircraft onto a visual final approach […] and completed a successful landing and stop on the runway […]

The Analysis section of the Report states:

The crew were faced with an instantaneous and unforeseen emergency. The combined actions of the co-pilot and cabin crew successfully averted what could have been a major catastrophe.

Further, the accident Report reveals that a replacement windscreen had been installed during the night prior the flight, and that the procedure had been approved by the Shift Maintenance Manager. However, 84 of the 90 windscreen retention bolts were 0.026 inches (0.66 mm) too small in diameter, while the remaining six were 0.1 inches (2.5 mm) too short. The left windscreen was blown out under effects of the cabin pressure when it overcame the retention of the smaller securing bolts. 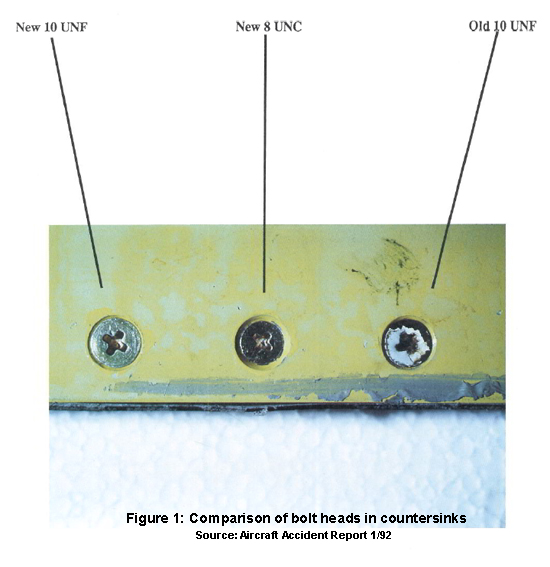 In the Engineering Factors section, the Report states:

a. During the fitment of the windscreen [...] the Shift Maintenance Manager was confronted with certain situations which made his job more difficult:

Nevertheless, problems of this type are not unusual and cannot be used to explain the subsequent chain of events which led to the loss of the windscreen.

b. A number of procedures were ignored and some poor trade practices followed [...]

The following Causal Factors to the accident are identified by the Report: