On 25 April 2010, a Beech King Air touched down at Nadi with its landing gear in the transit position after flying a night approach during which a significant electrical system failure had occurred. The landing gear retracted and the aircraft left the runway to the side and came to a stop resting on its fuselage. The Investigation attributed the electrical failure, which directly affected the landing gear operating system and required two diodes to have both failed was likely to have meant that one would have failed on an earlier occasion with no apparent consequence.

On 25 July 2010, a Beech B200 Super King Air (F-OIAN) being operated by Air Alizé on a public transport flight transporting medical personnel from Nouméa-Magenta, New Caledonia to Nadi, Fiji touched down at destination with its landing gear in the unlocked transit position after flying a night Visual Meteorological Conditions (VMC) approach during which a significant electrical system failure had occurred. The landing gear retracted and the aircraft left the runway to the side and came to a stop resting on the fuselage with the propellers bent and flaps damage. The pilots and the two passengers on board were able to exit unaided. One runway edge light was destroyed.

An Investigation was delegated to the French BEA by the Fiji Islands civil aviation authorities and a field investigator was sent to Nadi from the French overseas territory of New Caledonia to begin the Investigation.

Neither an Flight Data Recorder (FDR) or Cockpit Voice Recorder (CVR) were fitted to the aircraft and were not required to be. It was noted that Air Alizé was authorised to perform medical evacuation flights between the Fiji Islands Nouméa and routinely used the Beech King Air to do this. Both the 60 year old aircraft commander and the 54 year old First Officer were experienced on the aircraft type. The latter worked only part time for Air Alizé and otherwise was a qualified helicopter pilot and TRE(H) working for another company. Although the Beech King Air is certified for operation by a single pilot, when used as a public transport aeroplane by Air Alizé, it was flown by two type-rated pilots.

It was established that the landing at Nadi was to facilitate refuelling only and that the flight was destined for Wallis and Fortuna aerodrome to pick up and transfer a patient to Nouméa. About two hours after taking off from there, the night descent towards Nadi began in Instrument Meteorological Conditions (IMC) and a clearance was subsequently given to make an ILS approach to runway 02. Shortly after overflying a locator beacon positioned at 9.6nm from touchdown on the localiser, a landing clearance was given with a wind check of 110°/13 knots and advice that it was raining and the runway was wet.

The crew stated that having selected the landing gear down, they had seen 'three greens' indicating that it was locked down. As the aircraft emerged into VMC at about 1800 feet, the crew noticed, as a result of the windshield wipers stopping and the landing/ taxi and centre instrument panel lighting going off, that there had been a partial electrical failure. The crew located pocket torches and decided to continue the approach and did not advise ATC of any technical problem. They also subsequently said that the prevailing weather conditions around the aerodrome (see below) did not encourage them to abandon the approach. 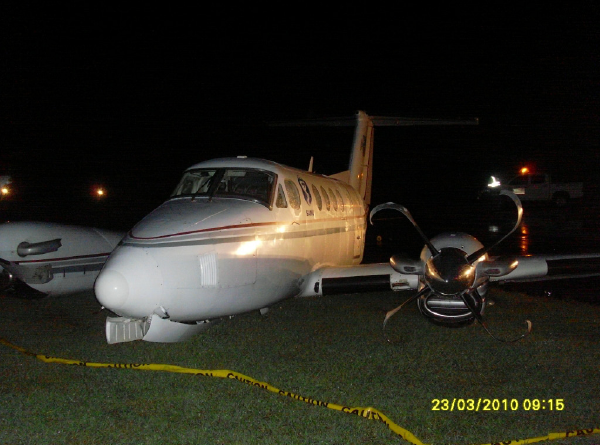 It was found that none of the five abnormal procedures documented for the aircraft electrical system in the Aircraft Flight Manual (AFM) were relevant to the failure which occurred.

The Investigation sought to establish the nature of the electrical system failure and the reason for the landing gear retraction at touchdown. It was found that that electrical failure had been confined to the "no 2 secondary circuit" which supplied power to various equipment and lighting systems including the windscreen wipers and some flight deck lighting as well as the landing gear control unit and the landing gear status lights. It did not supply power to the landing gear warning horn.

It was found that the reason for the electrical system failure was that two 70 amp diodes which were inaccessible to the crew, at least one of which was required to allow the "no 2 secondary circuit" to function, had failed. It was considered that one had almost certainly already been inoperative before the other having failed when the landing gear was selected down on the approach to Nadi. Once the two diodes had been replaced, the landing gear system was found to work normally. None of the CBs visible to the crew had tripped.

The aircraft manufacturer provided statistics which indicated that the in-service failure rate for the type of diodes which failed when fitted to both the accident aircraft type and to other aircraft types was "extremely low". It appeared that these diodes were an 'on condition'; component with no maximum service life but subject to "periodic inspection" every 600 flying hours.

After carefully considering all possibilities, the Investigation could not find a way to explain the sequence of events described by the crew, i.e. the illumination of the green landing gear down status lights followed by the unlocking of the landing gear with no action taken by the crew on the associated controls.

It was concluded that the decision to continue the approach without performing a proper evaluation of their situation after the obvious electrical malfunction was probably reinforced by:

The Causes of the Accident were summarised as follows:

At night in adverse meteorological conditions, the crew decided to continue with the approach and to land, while the landing gear was not locked in the down position due to the failure of the secondary electric circuit.

The origin of this failure was probably the increase in the number of operating cycles of the hydraulic power pack which delivers the hydraulic energy required to extend and retract the landing gear. This led to the failure of the diodes in the protective secondary circuit, which could not be checked in flight.

The decision to continue the approach resulted from incorrect comprehension of the electrical failure and the aural warning that sounded during the final approach. The conviction that the landing gear was locked down, associated with the meteorological conditions and the failure of the circuit-breakers to trip, did not prompt the crew to correctly assess the risk associated with the electrical failure."

The Final Report was published in English translation on 24 July 2014 following publication in French in June 2014. No Safety Recommendations were made.