On 24 April 2019, the engine of a Beech B200 en-route from Winnipeg to Churchill at FL 250 failed due to fuel exhaustion and the crew realised that they had forgotten to refuel before departure. An emergency was declared and a diversion to the nearest available airport was commenced but the right engine later failed for the same reason leaving them with no option but to land on a frozen lake surface. The Investigation concluded that confusion as to relative responsibility between the trainee Captain and the supervising pilot-in-command were central to the failure to refuel prior to departure as intended.

On 24 April 2019, a Beech B200, (C-FRMV) being operated by Keewatin Air on a non-revenue positioning flight as KEW202 from Winnipeg to Rankin Inlet via Churchill was forced to attempt a diversion to Gillam, when en route in the cruise at FL250 the first of the engines shut down due to fuel exhaustion. An emergency was declared and descent commenced but as they neared Gillam, the right engine failed, too, leaving them with no option but to land on a frozen lake surface resulting in substantial aircraft damage but no injuries. 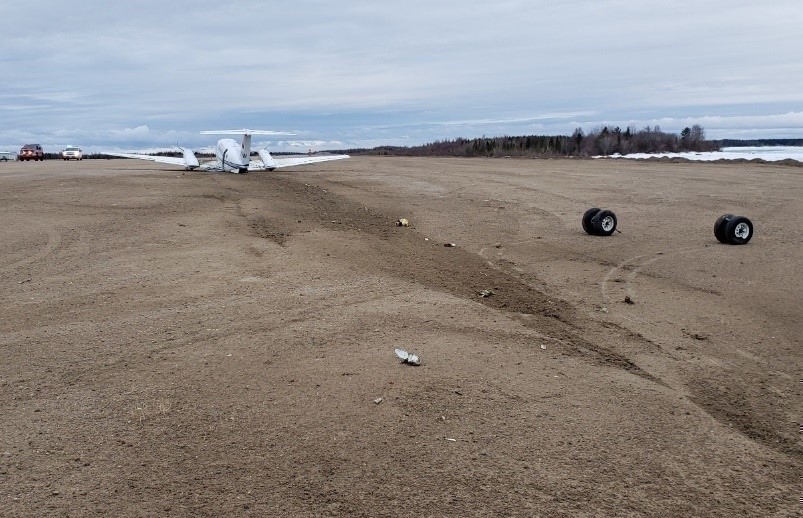 The aircraft in its final stopped position with main gear wheels detached. [Reproduced from the Official Report]

An Investigation was carried out by the Transportation Safety Board of Canada (TSB). The aircraft involved was not fitted with a FDR or a CVR nor was it required to be but its Garmin 1000 SD Memory Card was available and provided relevant data in respect of the flight path, engine operation and COM/NAV frequencies tuned.

It was noted that the Training Captain in command had approximately 3,500 flying hours including 1,350 hours on type and had joined the operator as a direct entry Captain in 2017. The trainee Captain had a total of approximately 1,350 flying hours of which all but 250 hours were on type and had joined the operator as a First Officer 16 months prior to the accident. The accident flight was part of his continuing ‘line indoctrination training’ prior to completing an upgrade to Captain. It was found that although the only qualified Captain on board was by definition the Pilot-in-Command (PIC), the Training Captain apparently “believed” that the trainee Captain was the PIC, confusion for which no obvious explanation was given since the Flight Crew Training Manual (FCTM) clearly stated that the Training Captain shall be PIC.

It was noted that the accident flight had been intended to position the aircraft out of revenue service to Rankin Inlet with a stop at Churchill to drop off one of two flight nurses who would be positioning for duty purposes. The flight was planned as a “line indoctrination flight" for the trainee Captain who was to occupy the left hand seat under supervision of the appropriately designated Training Captain and act as PF.

The flight crew reported for the flight duty involved in mid afternoon. It was noted that the Training Captain had not been provided with the full records of the trainee Captain’s previous line indoctrination. It was also learned by the Investigation that the Training Captain had considered the Trainee Captain in training to be the Pilot-in-Command (PIC). The Trainee Captain calculated that the 541 nm flight to Churchill would require 1114 kg of fuel - just under two third of the maximum possible fuel load - and recorded this quantity on the Operational Flight Plan with the alternate as Gillam. This planned fuel load would have provided a fuel endurance of almost 4 hours and met the applicable regulatory requirements.

The Training Captain conducted the pre-flight inspection of the aircraft and noted in the course of it that there was at that time approximately 725 kg of fuel in tanks and went to the fuel office to order fuel directly from a fuel technician but was unable to find anyone to take the order and planned to return later. The departure was then delayed awaiting one of the nurses and when the Trainee Captain later asked if the aircraft was “ready for the flight”, the Training Captain responded that it was.

Once both flight nurses had arrived, everyone boarded the aircraft. The Trainee Captain entered the OFP data into the FMS but the investigation was not able to establish that this included a fuel quantity figure. Following engine start, the After Start Checks call ‘Fuel Quantity’ received a response from the Trainee Captain of “SUFFICIENT/BALANCED”, the checklist standard response but given without looking at the fuel quantity indicators.

Shortly after the subsequent takeoff, the Trainee Captain performed a “progressive fuel calculation”, an action which actually appears in the Cruise Checklist. This required three figures to be entered on the OFP, the distance to destination, the fuel required and the fuel remaining. He entered 533nm as the distance to destination, the flight planned fuel load as the fuel required and 113kg less than that as the fuel remaining without looking at the fuel quantity indicators. He then called company and stated that the fuel endurance was the same figure that he had calculated prior to the flight. Thereafter, no check of the fuel quantity indications was performed by either pilot at any time.

When still in the cruise at FL250 and about 14 nm west-northwest of Gillam, the selected alternate, the left fuel pressure warning light illuminated, indicating low fuel and was almost immediately followed by that engine surging. The Trainee Captain reported having responded by switching on the left engine booster pump on and noticing that both fuel quantity indicators were on zero. When he asked the Training Captain about this, the latter realised that he had forgotten to order any fuel.

An emergency was declared to ATC and an emergency descent commenced. On the basis that the destination weather was “marginal”, it was decided to divert to Gillam, although by the time this happened, which as only when the heading bug was set (see below) the aircraft had continued on track towards Churchill for another 2 minutes. After 1000 feet of descent, the left engine had exhausted its fuel supply and stopped. The QRH Engine Shutdown Checklist was completed but the propeller, which had been set to approximately 1660 rpm for the cruise, continued to windmill at speeds between 1300 and 2000 rpm for the rest of the flight.

Two and a half minutes after the first crew awareness that fuel was almost exhausted, the Training Captain completed setting the FMS to show a direct track to Gillam and “instructed the Trainee Captain to turn right and follow it”, having set the heading bugs accordingly. The right engine power was reduced and for the first three minutes of single engine-only power, the descent rate varied between 3000 and 6000 fpm. The landing gear was extended to get a descent rate which would enable the shortest routing to runway 23 at Gillam and ATC was advised that the emergency was “fuel related”.

When descending through approximately 5000 feet amsl, the Training Captain displayed a VNAV profile to Runway 23 on the FMS and the landing gear was retracted as this was intercepted. Six minutes after starting the emergency descent, the airspeed was down to around 100 knots and the Trainee Captain was having difficulty controlling the aircraft which was intermittently going below the VNAV profile so the Training Captain took over control as PF.

One minute later, passing 2800 feet amsl, the left propeller ceased windmilling altogether and half a minute after that the flight crew put out a MAYDAY call on the Gillam frequency. The aircraft emerged from cloud passing approximately 1500 feet aal and the Training Captain was able to visually identify the Gillam runway. At about 835 feet agl, the right engine failed and it was clear that it would not be possible to make the runway. Passing 530 feet agl and 1 nm from the runway, the right engine was shut down and feathered whilst continuing towards the runway over the frozen surface of Stephens Lake. Flaps were left up and the gear was lowered just in time for it to be locked down as the aircraft touched down on the frozen surface with sufficient remaining airspeed to enable the nose to be raised as it struck the rocky shoreline and came to a stop approximately 190 feet before and 12 feet below Gillam’s 1534 metre-long gravel runway. The illustration below depicts the diversion flight path.

All occupants were uninjured and able to exit the aircraft unimpeded via the main cabin door. The duty airport operator, who had been advised of the diversion by ATC, arrived at the crash site shortly after all occupants had exited the aircraft. Although their attendance had not, in the event, been required, the local fire service and medical team were notified somewhat later than was appropriate and only arrived on site an hour after the crash. 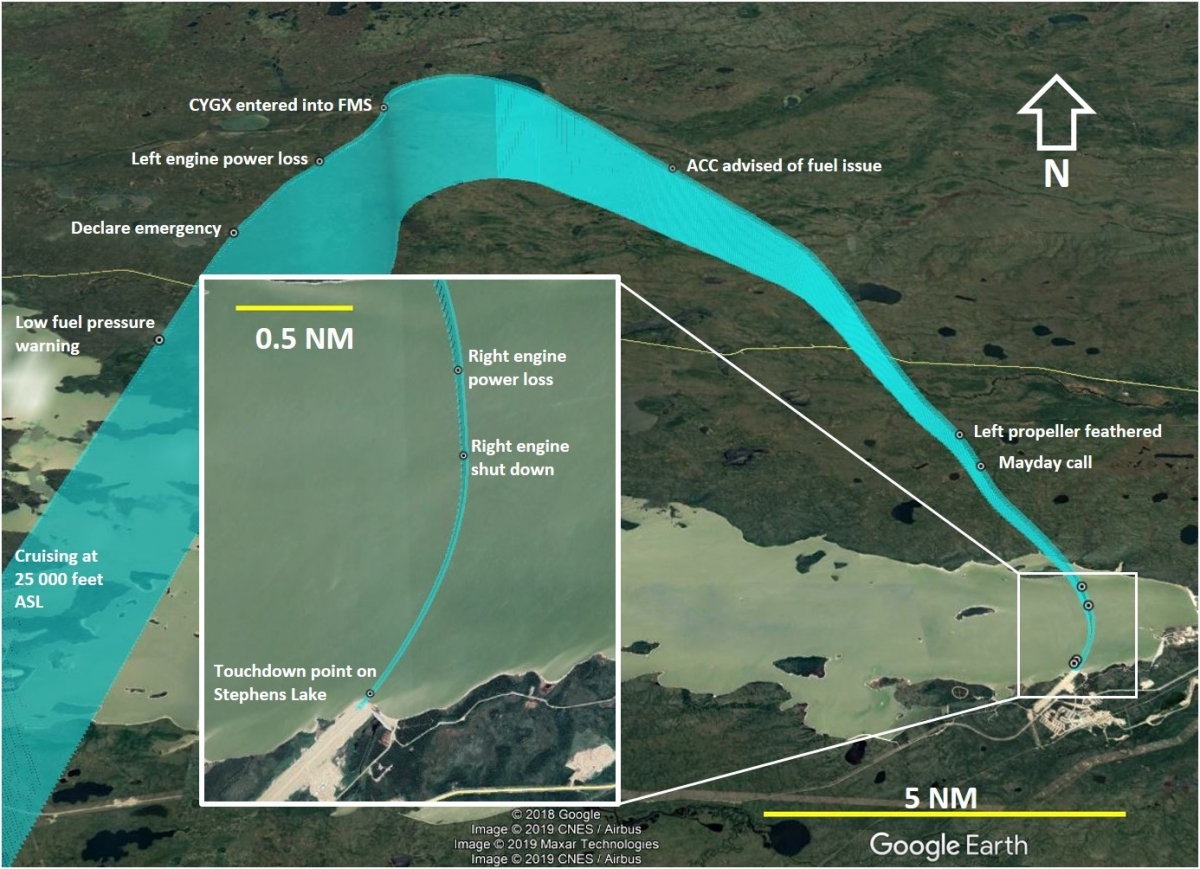 An annotated reconstruction of the flight path following the first engine failure. [Reproduced from the Official Report]

The lower part of both main landing gear legs were detached and both engine nacelles and the lower surfaces of both wings were damaged. The underside of the fuselage was damaged and the whole fuselage was “creased” aft of the main cabin door. The centre section of the main wing spar was distorted and one of the propellers had sustained damage due to ground contact.

In respect of the actual fuel on board when the accident flight departed on what would turn out to be 1 hour 44 minutes airborne, the Investigation found that although the Training Captain had noted approximately 725 kg of fuel in tanks, there may actually have been as little as 590 kg on board. In respect of the requirement to be vigilant in respect of fuel quantities on board prior to and during flight, it was noted that the operator’s OM content on the subject included the following:

It was noted that, although it was not a policy contained in the OM or any other operations document, “refuelling by the last crew to fly an aircraft was an accepted practice at Keewatin Air, both to expedite departures in the event of a medical evacuation call and as a courtesy to the first flight crew the next day (and that) as a result, the requirement to refuel the aircraft was not always required as of part of the pre-flight task sequence”. It was also noted that if the actual quantity of fuel on board rather than the planned fuel had been entered into the FMS, then an incorrect quantity of fuel would have been displayed for the quantity to destination but since there was reportedly nothing out of the ordinary on the FMS display, this could not have happened.

Safety Action taken as a result of the accident whilst the Investigation was in progress was noted as having included the following:

The Final Report of the Investigation was authorised for release on 3 June 2020 and it was officially released on 27 July 2020. No Safety Recommendations were made.