On 15 September 2012, the crew of a Beech Super King Air on a medevac flight making an ILS approach to runway 23 at Glasgow became temporarily distracted by the consequences of a mis-selection made in an unfamiliar variant of their aircraft type and a rapid descent of more than 1000 feet below the 3500 feet cleared altitude towards terrain in IMC at night followed. An EGPWS PULL UP Warning and ATC MSAW activation resulted before the aircraft was recovered back to 3500 feet and the remainder of the flight was uneventful.

On 15 September 2012, a Beech B200 Super King Air on a medical transfer flight from Wick to Glasgow was observed by ATC to make a rapid descent below the cleared altitude of 3500 feet in Instrument Meteorological Conditions (IMC) at night after becoming established on the Instrument Landing System (ILS) LOC at destination. Recognition by the crew of the unintended descent towards terrain was followed by an Terrain Avoidance and Warning System (TAWS) ‘TERRAIN TERRAIN PULL UP’ Warning and an alert from ATC who also noted a consequential Minimum Safe Altitude Warning (MSAW) activation.

An Investigation was carried out by the UK AAIB assisted by access to radar and R/T recordings.

It was established that with the Co Pilot as PF and the AP engaged, the aircraft had been radar vectored onto the ILS LOC for runway 23 and as the cleared altitude of 3500 feet was approached, power had been further reduced to aid speed reduction prior to descent on the ILS GS. However, this had had the effect of (routinely) activating the gear warning horn. The PF attempted cancellation but the desired result was not achieved and the continued sounding of the warning horn was accompanied by disconnection of the AP and removal of all FD modes leaving only a fly up command on (only) the left hand side attitude indicator because the go around button had been inadvertently pressed. The only annunciations of AP/FD status were on the panel at the left hand side pilot position, above the attitude indicator and thus difficult for the Co Pilot to see.

Both crew temporarily lost situational awareness as a result of the confusion caused and at a range of 15nm from the runway, the aircraft began to descend below 3500 feet at an increased rate of descent of around 3000 fpm for around 16 seconds. The first to recognise the unintended descent was the aircraft commander who immediately instructed the PF to climb back to 3500 feet. However, as this was being done, an Terrain Avoidance and Warning System (TAWS) ‘TERRAIN TERRAIN PULL UP’ Warning occurred and ATC, who had observed the unexpected descent, also advised of it - shortly before a corresponding Minimum Safe Altitude Warning (MSAW) Alert was generated.

Recovery to 3500 feet was achieved over a 40 second period from a minimum altitude of 2273 feet during which the minimum vertical clearance from terrain was 1484 feet. The vertical profile flown in relation to terrain is shown in the diagram below taken from the Official Report. 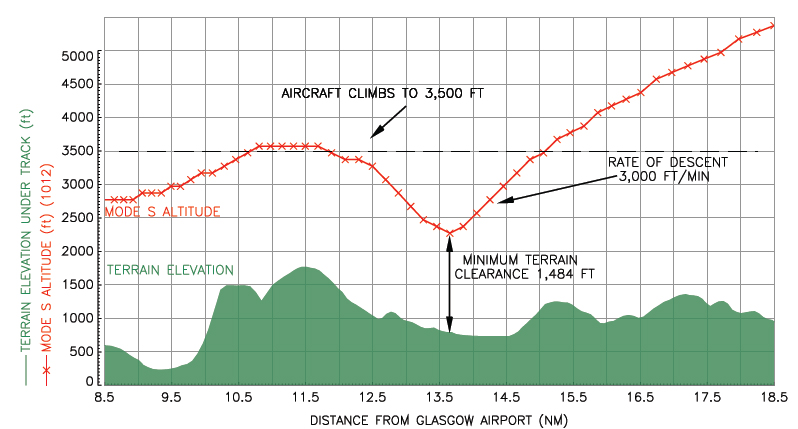 It was noted that the Operators fleet of B200 aircraft was predominantly a variant fitted with Electronic Flight Instrument System flight instrumentation whereas the incident aircraft was fitted with mechanical instruments and only had an ADI at the left hand side pilot position. It was also noted that the go around button on the incident aircraft was in the same position on the left hand side of the left hand power lever as the gear warning horn silencing button on the EFIS-equipped aircraft, the only difference being that the EFIS variant go around button is recessed but the non-EFIS variant gear warning cancel button protrudes.

It was established that the Co-Pilot had only recently joined the Operator after obtaining a B200 type rating in the USA, and after completing line training had flown only five sectors. His type rating training and limited subsequent line flying had all been conducted on EFIS-equipped aircraft and although he had been briefed on the non-EFIS variant by another line pilot and indicated to the Operator that he was “content to fly an aircraft equipped with mechanical instrumentation”, he had not received any formal differences training.

The Investigation examined the situation in respect of differences training for aircraft variants covered by a common type rating and found that there are no EASA requirements for differences training within the B200 type rating. It was found that UK CAA guidance extant at the time of the incident had included a generic recommendation that “pilots converting from EFIS to Mechanical Instruments for the first time” should obtain appropriate differences training - but this advice had been absent from the corresponding replacement document since issued.

In the light of these findings, the Investigation considered that it was likely that the inadvertent selection had “diminished the effectiveness of the Co Pilot’s instrument scan and increased his workload” whilst “actions associated with the inadvertent and unrecognised AP disengagement had distracted both pilots from the primary flight instruments and caused a breakdown in situational awareness, such that the aircraft descended below its cleared altitude unnoticed by the crew”.

The formally stated conclusion of the Investigation was that “the incident followed a loss of situational awareness by the crew, caused by a combination of distraction and an unfamiliar cockpit layout".

The Final Report of the Investigation was published on 13 June 2013. No Safety Recommendations were made but Safety Action taken was noted as follows: