On 3 October 2015, the pilot of a Beech Super King Air on a business flight lost control in IMC shortly after take-off and the aircraft subsequently impacted terrain at high speed. The Investigation concluded on the balance of probabilities that pilot medical incapacitation was likely to have occurred. It was noted that the aircraft had not been fitted with TAWS nor was it required to be but it was found that alerting from such a system would have increased the chances of the only passenger, another professional pilot, successfully taking over and three corresponding Safety Recommendations were made.

On 3 October 2015, a Beech B200 Super King Air (G-BYCP) being operated by an unidentified UK company on an IFR business flight from Stapleford to RAF Brize Norton crashed shortly after take-off in an out of control condition which had begun in day IMC. The aircraft was destroyed by the impact and a post-crash fire, and both the pilot and the only passenger were killed.

An Investigation was carried out by the UK AAIB. The aircraft was not fitted with crash-resistant on-board data recorders or TAWS, nor was it required to be. However a good reconstruction of most of the flight path was accomplished using radar data from four installations in the general area.

It was established that the flight was being operated with two company employees on board (one being the pilot - the aircraft could be operated by either one or two pilots) in order to pick up two passengers at Brize Norton for onward travel. The 40 year-old pilot held a CPL/IR valid on Multi-Engine Piston aircraft and occupied the left pilot seat whilst the other employee occupied the right seat. He had a total of 1,941 total flying hours but almost all (1,791 hours) had been flown on single engine aircraft. He had obtained his King Air type rating in June 2014 and had renewed it in May 2015 before commencing line training with the accident aircraft operator in August 2015. He had passed his final line check 6 days prior to the accident and the operator advised that this had been conducted in "generally good" weather although noted that "he had not been required to fly an IMC departure from Stapleford Aerodrome". At the time of the accident, he had flown 6 hours 40 minutes in command on type (P1) and 113 hours as in command under supervision of the aircraft commander (P1/US). The passenger was also a qualified pilot and held a current ATPL valid on the Bombardier Challenger 300 and the Embraer ERJ 135/145 but not on the King Air.

The planned departure time was 0815 but poor visibility at Stapleford meant that the departure was delayed for an hour until "trees were visible just beyond the end of Runway 22L, indicating that visibility was at least 1,000 metres and the pilot decided that conditions were suitable for departure". The generally prevailing low level weather conditions in the planned direction of departure were advised to the Investigation as having been "poor...with some widespread areas of low cloud and/or fog" associated with "very poor visibilities (and) the top of the fog and/or cloud generally around 1,000-1,500 feet amsl with little or no cloud above this level". The nearest airport to Stapleford reporting present weather conditions was London Stansted which, shortly after the time of take-off, was giving fog with a visibility of 600 metres and sky obscured.

The aircraft took off at 0908 and was observed from the ground to climb "in a wings level attitude until it faded from view shortly after take-off". The pilot's intention prior to take-off was to turn right once safely airborne and track toward the BPK VOR on the 128° radial climbing not above 2,400 feet QNH so as to remain clear of the London TMA. Radar data showed that the aircraft had begun the right turn as it passed approximately 750 feet QNH (565 feet aal) and had continued to climb in the turn until it reached 875 feet QNH after which it began to descend. This descent continued "until the aircraft struck some trees at the edge of a field approximately 1.8 nm southwest of the aerodrome". The impact and consequent fire were not survivable. 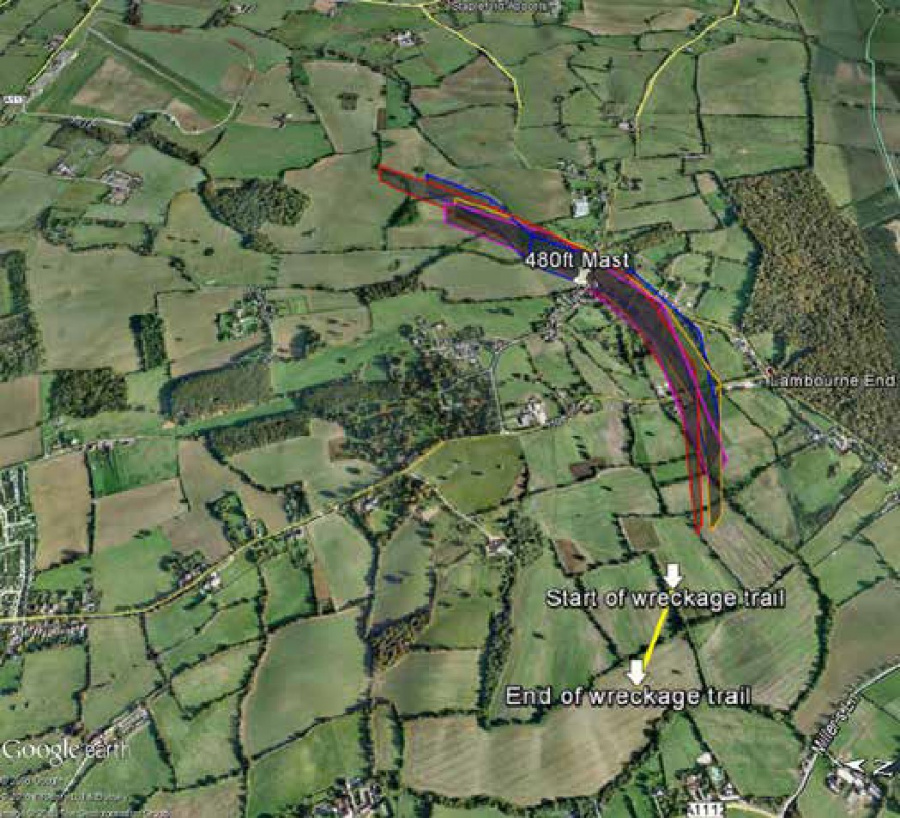 Using radar data, it was possible to estimate the mean rate of the achieved climb after take-off as 1,500 fpm and the descent which followed as occurring at a rapidly increasing rate which eventually exceeded 7,000 fpm. The final recorded ground speed was 188 knots shortly before radar coverage ended at 230 feet agl. Various radar sources all produced similar estimates of the ground track as reproduced in the illustration above. Available data facilitated simulator modelling of the flight to be carried out which allowed the aircraft manufacturer to undertake flight performance analysis. This work allowed the Investigation to consider more broadly the likely development of the loss of control which had occurred and some of the potential explanations for it. Various observations were made based on the various sources of evidence available. They included the following:

Other matters of interest in relation to the accident were noted as:

"Examination of the powerplants showed that they were probably producing medium to high power at impact. There was contradictory evidence as to whether or not the left inboard flap was fully extended at impact but it was concluded that the aircraft would have been controllable even if there had been a flap asymmetry. The possibility of a pre-accident control restriction could not be discounted, although the late change of aircraft attitude showed that, had there been a restriction, it cleared itself. The evidence available suggested a loss of aircraft control while in IMC followed by an unsuccessful attempt to recover the aircraft to safe flight. It is possible that the pilot lost control through a lack of skill but this seemed highly unlikely given that he was properly licensed and had just completed an extensive period of supervised training. Incapacitation of the pilot, followed by an attempted recovery by the additional crew member, was a possibility consistent with the evidence and supported by the post-mortem report. Without direct evidence from within the cockpit, it could not be stated unequivocally that the pilot became incapacitated. Likewise, loss of control due to a lack of skill, control restriction or distraction due to flap asymmetry could not be excluded entirely. On the balance of probabilities, however, it was likely that the pilot lost control of the aircraft due to medical incapacitation and the additional crew member was unable to recover the aircraft in the height available."

The Final Report of the Investigation was published on 13 October 2016.