On 31 December 2011 a USAF C12 Beech King Air descended 700 feet below the cleared outbound altitude on a procedural non precision approach to Stornoway in uncontrolled airspace in IMC and also failed to fly the procedure correctly. As a result it came into conflict with a Saab 340 inbound on the same procedure. The Investigation found that the C12 crew had interpreted the QNH given by ATC as 990 hPa as 29.90 inches, the subscale setting units used in the USA. The Saab 340 pilot saw the opposite direction traffic on TCAS and descended early to increase separation.

On 31 December 2011 a Beech 200 C12 being operated by the USAF on a ferry flight to the US was flying from Prestwick to Stornoway as part of that mission. During a non precision approach to Stornoway in day IMC, it descended into conflict with a Saab 340 being operated by Loganair on a scheduled passenger flight from Edinburgh to Stornoway which, after seeing the conflict on Airborne Collision Avoidance System (ACAS), descended early to increase separation.

An Investigation was carried out by the UK Airprox Board. It was noted that although a report on the incident had been requested from the US Third Air Force, no such report had been forthcoming. It was also noted that the incident had occurred in uncontrolled airspace and with only procedural ATS available and with APP and TWR duties being performed by one controller and an assistant.

It was established that both aircraft had been cleared by ATC to make an approach using the Runway 18 LOC/DME/NDB (L) procedure involving a DME at the threshold. The diagram below reproduced from the official report shows this procedure.

The C12 had been No 2 and had consequently been instructed to remain at 3000 feet on QNH 990 hPa outbound until advised and had correctly read this back but without mention of hPa (or mb).

The Saab 340 crew saw the opposite direction traffic on their TCAS display and, noting that the other aircraft was flying level 700 feet too low, attempted to establish the altimeter subscale setting being used, initially through ATC and then direct. However, there was no resolution and, being familiar with the local area and terrain, the aircraft commander decided to descend early on the FAT to increase separation. As a result of this action, the separation achieved as the aircraft tracks crossed was increased from what would have been 300 feet to 1000 feet.

The Investigation noted that the C12 had descended in the hold after making a parallel join from the south passing FL080 in the descent. Having already been cleared to commence the procedure not below 3000 feet QNH, when ATC queried whether the C12 crew were familiar with the alternate variant of procedure in which the outbound track was flown by extending the outbound leg of the hold, the C12 crew had responded in the affirmative but stated that “…we’re fighting this wind right now we’re trying to get back over on that side”. The ACC SSR radar recording obtained by the Investigation (but not available to the Stornoway controller at the time) showed that the aircraft was then about 3nm northwest of the overhead, having turned east from the inbound holding track instead of west. 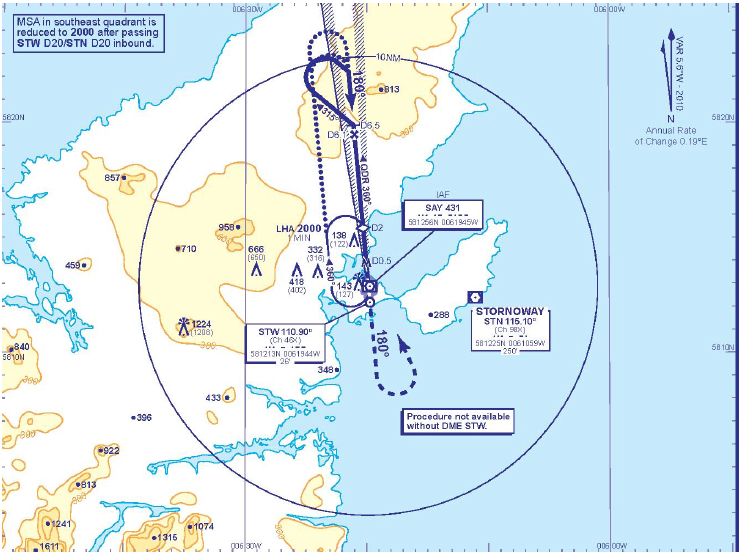 It was noted that after both aircraft had landed, the SF340 crew had (again) told the C12 crew to check that they had been using 990 hPa as the QNH outbound. A review of the R/T recording showed that on one of the several occasions the C12 crew had read back the QNH, they had said “two nine nine zero” without the controller noticing. It was noted that a sub scale setting of 29.90 inches is equivalent to 1013 hPa, and the difference between the altitude which would result with the correct setting of 990 hPa compared to that with 1013 hPa set was the 700 feet difference between the C12s reported and actual altitudes observed by the SF 340 pilot on TCAS and subsequently confirmed by the ACC SSR recording.

It was noted that in the US, subscale settings below 30.00 inches are routinely passed with the first number omitted so that 29.90m inches would be passed as “990”. It was concluded that the C12 had actually set 29.90 inches Hg on their subscale.

The formal statement of Cause was given as:

“Having set the incorrect pressure on the altimeter subscale, the (C12) crew descended below their cleared altitude and into conflict with the SF340.”

The ICAO AIRPROX Risk Category (the actual risk after any avoiding action) was assessed as ‘C’.

The Final Report of the Investigation was published on 28 June 2012. The following Safety Recommendation was made: