On 22 October 2009, a BN2 Islander suspected to have been overloaded experienced an engine failure shortly after departure from Curaçao. Rather than return, the Pilot chose to continue the flight to the intended destination but had to carry out a ditching when it proved impossible to maintain height. All passengers survived but the Pilot died. The cause of the engine failure could not be established but the Investigation found a context for the accident which had constituted systemic failure by the Operator to deliver operational safety which had been ignored by an inadequate regulatory oversight regime.

On 22 October 2009, a Britten-Nornan BN2A Islander (PJ-SUN)being operated by Divi Divi Airlines on a scheduled passenger service from Curaçao to Bonaire in day Visual Meteorological Conditions (VMC) experienced a failure of the right engine as it reached cruise altitude. The Pilot attempted to complete the intended flight but when altitude could not be maintained he was eventually forced to carry out a ditching within a few miles of the destination. Four of the nine passengers received minor injuries but all were able to exit the aircraft before it sank in deep water. Attempts to release the Pilot who was trapped and had been rendered unconscious by the effects of the impact were unsuccessful.

An Investigation into the accident was initially commenced by the Directorate of Civil Aviation Netherlands Antilles (DCANA) but on 17 November 2009 the Dutch Safety Board (DSB) received a request from the of the Ministry of Traffic and Transport of the Netherlands Antilles to take over the Investigation and began work immediately. The DSB Investigation sought to established the full circumstances of the accident as well as carry out a review of the emergency services response to it. It was noted that the aircraft was not required to be fitted with either a Cockpit Voice Recorder (CVR) or Flight Data Recorder (FDR), nor had it been so fitted. However recorded radar data showing the progress of the flight was available.

It was noted that the Pilot had achieved his first command relatively recently on the BN2 Islander having gained most of his commercial multi-engine flying experience as a Co-pilot on the DE HAVILLAND CANADA DHC-6 Twin Otter undertaking similar VFR operations to the ones he was now flying on the Islander.

It was established that the aircraft had taken off from Curaçao for Bonaire with all ten seats occupied including the one next to the pilot. Climb to a cruising level of FL035 for the overwater flight to Bonaire had proceeded normally, but when the pilot throttled back to cruise power upon reaching this level, the right engine had failed. After unsuccessful attempts at a restart, the pilot had been observed to feather the failed engine propeller and maintain directional control by use of rudder. Despite the failure occurring whilst the aircraft was still over or very near land - and only about a quarter of the way along the planned route - the Pilot continued the flight towards Bonaire. It was found that although the flight was VFR and the cruise altitude was therefore at the discretion of the Pilot, the normally chosen cruise altitude was 2000 feet. Although no reason for this decision could be determined, the Investigation did find circumstantial evidence in the form of irregularities in the loadsheet prepared by the pilot for the flight which indicated that he may well have been aware that the aircraft was overloaded - the Investigation view on this subject was stated as:

“The ninth passenger and the values for the baggage, cargo and fuel weights were not shown on the load and balance sheet filled in by the pilot…..and the only possible explanation for this is that filling in the weight of the ninth passenger and the correct baggage, cargo and fuel weights would have made the total take-off weight on the sheet higher than 6600 lb. This would have been reason for keeping the aircraft on the ground as it would have exceeded the (absolute maximum) weight limit of 6600 lb that was being applied by Divi Divi Air. The supposition is justified that the pilot must have been aware that the aircraft was being overloaded.”

As the flight progressed, it became apparent that altitude could not be maintained on one engine - radar data (see the diagram below) showed that the aircraft descended at an average rate of approximately 140 fpm from the moment the engine failed until the ditching. Eventually, approaching Bonaire, it became obvious that a ditching would be inevitable. This was performed without flaps set and with the stall warning system sounding as impact with the water approached. Contact with the water resulted in the left front door being torn off such that the cabin rapidly filled with water. However all nine passengers were able to exit the aircraft and formed a group in the water with those wearing life jackets supporting those who were not. The Pilot was trapped in his seat by the distortion of the front of the aircraft caused by the impact and had also hit his head on the cabin structure and been knocked unconscious. Despite efforts by passengers to release him, he was still trapped and apparently unconscious when the aircraft sank shortly afterwards and according to the subsequent post mortem died from drowning. 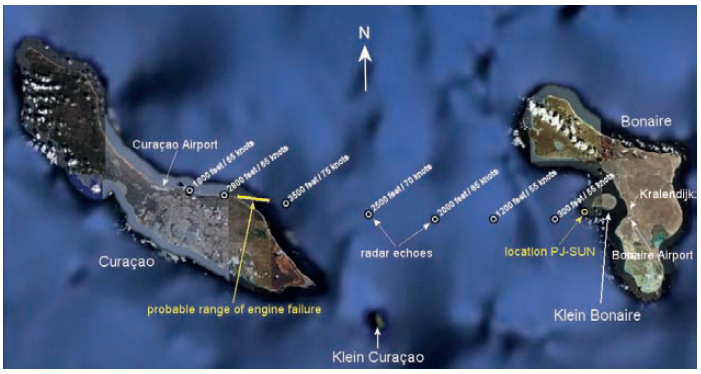 The Investigation found that although there was no specific ditching procedure in the Aircraft Flight Manual (AFM), instructions for ditching were included in the Divi Divi Air General Operating Manual. These stated that in order to minimise impact forces by landing at as low a speed as possible, the flaps should be selected their maximum setting for any ditching with one engine inoperative. These instructions also stated that “a stall situation should be avoided because it will result in uncontrolled impact with the water surface:. Corresponding pilot training was found to have been provided on these points. In was additionally established that Company Pilot Line Training emphasised that on the Curaçao to Bonaire route, a return to Curaçao should be made “even when engine problems occur past halfway (point) due to the prevailing eastern trade wind, the better landing options on the east coast of Curaçao and the better technical and assistance facilities on Curaçao”.

The reported deformation of the front of the aircraft structure caused during the ditching was confirmed following the recovery of the wreckage – see the illustration below: 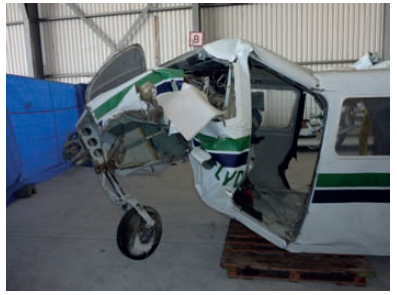 In respect of the weight of the aircraft, it was found that on the instructions of the pilot the accident aircraft had been refuelled prior to departure to full tanks. Although it was noted that the Britten-Norman Islander fuel type was not available in Bonaire and so return fuel had to be carried, it was found that a maximum fuel load was sufficient for three return flights on the high frequency service on the Curaçao - Bonaire route and that Pilots often uplifted fuel sufficient for multiple return flights in order to save time.

Despite every attempt being made, it proved impossible for the Investigation to determine why the right engine had malfunctioned. On this subject, the Investigation noted that disassembly and examination of both recovered engines found no indications that parts had overheated or suffered from insufficient lubrication and there were no traces of extraordinary wear and tear. Overall, it was considered that both engines had been in good condition. The magnetos and carburettors were too corroded after seawater immersion to be functionally tested but no mechanical problems were found to indicate that the engines were not capable of producing power.

It was concluded that the left engine was still providing high power up to the ditching. From the statements of the passengers in respect of the attempted restarting of the right engine following its failure, it could be concluded that it did not stop due to an engine seizure and that this conclusion was supported by the absence of any indications of overheating or lack of lubrication of engine parts.

The main focus of the Investigation became what was soon discovered to have been the systemic failure of Divi Divi Air to operate safely and a concomitant systemic failure of the system of Regulatory Oversight to resolve this situation. Although there had not been significant consequences of this in the investigated accident, there were also concerns at the apparent fitness for purpose of the available emergency response ‘system’.

The Investigation concluded that the three Causal Factors which had contributed to the accident were:

Finally, three Other Factors identified as a result of the Investigation as follows:

The Investigation noted the following Safety Action taken as a result of the Accident:

(1) The Directorate of Civil Aviation of the Netherlands Antilles:

November 2009 and subsequently, as permitted, changed to the new 80 kg standard weight after CAA consideration of the results of this had been sent weekly to the Directorate of Civil Aviation (DCA) for three months.

Four Safety Recommendations were made as a result of the Investigation: