On 7 October 2012, a Britten-Norman BN2 Islander pilot lost control of their aircraft shortly after take off from Antigua when the right engine stopped due to the presence of water in the corresponding fuel tank. The Investigation found that heavy rain whilst the aircraft had been parked prior to flight had resulted in water entering the tank because of anomalies in the fuel tank filler neck and cap. The reason why the pilot had been unable to keep control of the aircraft was not explained but evidence of his performance under training and test suggested weakness in aircraft control.

On 7 October 2012, a Britten-Norman BN2A-26 Islander (VP-MON) being operated by Fly Montserrat on a scheduled Visual Flight Rules (VFR) passenger flight from Antigua to Montserrat (both self-governing British Overseas Territories) in day VMC crashed shortly after take off within the airport perimeter, killing the pilot and two of the three passengers, the third passenger sustaining serious injuries. The aircraft was destroyed by impact damage, especially to the forward fuselage 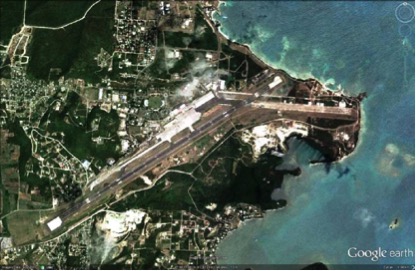 The remains of the aircraft (Reproduced from the Official Report)

Senior staff from the Eastern Caribbean Civil Aviation Authority (ECCAA) attended the accident site upon notification and began an Investigation immediately. The accident site was recorded as being approximately 140 metres to the right of take off runway 07 (see below). The UK AAIB was appointed as an Accredited Representative since UK was both the State of Design and Manufacture of the aircraft and (through its registration in a British Overseas Territory) the State of Operator. 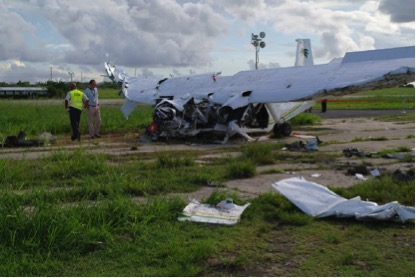 It was noted that Fly Montserrat was the trading name of Montserrat Airways and that the accident aircraft had been introduced into service in 2009 after a refurbishment at a Canadian MRO. Following this refurbishment, an audit of the airworthiness of the aircraft by the regulatory oversight agency Air Safety Support International (ASSI, a UK CAA subsidiary) had taken place without any significant findings.

The accident flight was the fourth sector of the day on the route for the aircraft and the second for the 31 year old-pilot who was believed to have not less than 500 hours total flying time (there were inconsistencies in the flight time recording in his log book). The amount of the total time which had been on the accident aircraft type was not reported.

Shortly before the aircraft departed, the airport had been briefly shut to VFR traffic because of "Cumulonimbus (Cb) activity and heavy rain" but had just removed this restriction. The runway in use for take off, 07 because of a large Cumulonimbus cloud on the climb out in the other direction, was accepted by the pilot despite a wind check given by ATC with the take off clearance which was equivalent to a 10 knot tailwind component, significantly greater than the Aircraft Flight Manual (AFM) limit of 5 knots.

Witnesses described the initial climb as normal until about 200 to 300 feet agl then "the aircraft then appeared to ‘sink’, losing a small amount of height without yawing or rolling, before yawing to the right, then rolling to the right, and pitching nose down into an incipient spin to the right". Witnesses described this incipient spin continuing until the aircraft struck the ground "in an extreme nose-down, right-wing-low attitude". The sole surviving passenger "recalled that the stall warning sounded, and its accompanying red light (which was mounted on the right-hand side of the instrument panel and in his line of sight) illuminated throughout this period and until impact".

It was established that at impact, the left engine had been running but the right had not and the right propeller was not in the feathered position. It was concluded that "the as-found positions of the engine and propeller controls suggested that no attempt had been made to shut down the right-hand engine or feather its propeller".

The Investigation found that the right engine fuel system had been contaminated by a significant quantity of water which it was considered would have been sufficient to have been caused the engine to stop. It was noted that after arriving from Montserrat earlier that morning, the aircraft had been refueled and then remained parked on the apron during a subsequent period of heavy rain - 42mm had been recorded over a 2 hour period. Elimination of other possibilities led to the conclusion that the water must have been rain water which had entered the right wing tank during this period through the fuel filling access despite the filler cap being in place. Whilst it was noted that no pre-flight water in fuel contamination check had been carried out prior to the accident flight, none was required.

Examination of the filler caps found that both were of a modified type designed to be used with a modified filler neck - but although a modified neck had been fitted to the left wing tank, such a neck was not fitted to the right wing tank. The effect of this was that although the cap would appear to fit satisfactorily, it would not always seal properly, with corrosion of the type which it was found had led to the (non approved but effective) replacement of the left wing tank filler neck following the acquisition of the aircraft in 2009 possibly contributing to the vulnerability. It was proved by experiment that "water could leak past the cap seal and into the tank, although the leakage rate tended to vary each time the cap was re-seated such that it was sometimes possible to achieve an effective seal".

It was considered likely that on the basis of the rate of fuel use, water only began to be drawn into the fuel line leading to the engine once the aircraft rotated for take off, which would fit with the initially normal climb observed. It was noted that a modified fuel suction filter which would "appear offer an improved appear to offer an improved tolerance of water in the fuel system in comparison with the original design" had been available since 1968 but had only been mandated by the Australian authorities. It was found that after a 1984 fuel contamination fatal accident to a BN2 Islander in Puerto Rico, the National Transportation Safety Board (USA) (NTSB) had issued a Safety Recommendation to the Federal Aviation Administration (FAA) that this modification should be mandated but "the FAA, following consultation with the UK CAA, did not accept the recommendation".

It was noted that neither the non-approved filler neck fitted to the left wing tank or the mis-match between the pre-mod filler neck and the post mod filler cap fitted to the right wing tank had been detected by the ASSI Survey carried out in 2009 after the pre-delivery maintenance in Canada in 2009 or at any of the subsequent ASSI Audits.

In respect of the tail wind take off beyond the fact that it was contrary to AFM limits, it was considered that either windshear associated with the cumulonimbus cloud (west of the landing threshold) or the prevailing wind gradient "may have caused the accident aircraft to experience performance-reducing shear in its climb, as it flew from relatively weaker westerly winds at the surface into relatively stronger winds aloft". It was considered that the reports of eyewitnesses that the aircraft had appeared to ‘sink’ before it rolled and yawed, would be consistent with negative wind shear whereas an into-wind takeoff would have reduced the chances of this.

The Investigation formally documented the following Causal and Contributory Factors:

The Final Report was published by the ECCAA on 15 October 2015.