On 1 December 2014, a night mid-air collision occurred in uncontrolled airspace between a Lockheed C130H Hercules and an Alenia C27J Spartan conducting VFR training flights and on almost reciprocal tracks at the same indicated altitude after neither crew had detected the proximity risk. Substantial damage was caused but both aircraft were successfully recovered and there were no injuries. The Investigation attributed the collision to a lack of visual scan by both crews, over reliance on TCAS and complacency despite the inherent risk associated with night, low-level, VFR operations using the Night Vision Goggles worn by both crews.

On 1 December 2014 a USAF C-130H Hercules (T/N 88-4404) operating as PAKR32 and a US Army C-27J Spartan (T/N 10-27030) operating as GECKO33 had both departed Pope AAF on VFR training missions. The C27 had just taken off from an intermediate stop at Laurinburg-Maxton Airport. Approximately 8 miles south of Mackall AAF, they collided in Class ‘G’ airspace in night VMC. Both aircraft declared emergencies and recovered to Pope AAF and Mackall AAF respectively. There were no injuries to the total of thirteen crew members on board the aircraft but there was extensive damage to both aircraft.

An Investigation was carried out by a USAF Accident Investigation Board (AIB). Both aircraft DFDRs were downloaded and radar recordings of the flight paths of the two aircraft were available. It was noted that at the time of the collision all 6 pilots on the two flight decks were wearing NVGs.

The C130 was scheduled for a local tactical training mission from Pope AAF. Its flight crew included three pilots, one (MP3) in the left hand seat who was upgrading to ‘Flight Lead’ status and had 1591 hours total flying experience which included 780 hours in type, a co-pilot (MCP2) who had 539 hours total flying experience, all on type and an Instructor/Evaluator Pilot (MIP2) who had 3692 total flying hours which included 1167 hours on type. These pilots had recorded variable levels of experience in using NVGs ranging from 67 hours to 185 hours. The mission tasks included a High Velocity Container Delivery System (HVCDS) airdrop followed by proficiency training for the Pilots at Pope AAF.

The C27 took off first and during training circuits at an outfield, a TCAS failure was annunciated and this failure was subsequently confirmed by a loss of an ATC secondary radar return. The C130 took off one hour after the C27 and about 45 minutes later, the Instructor/Evaluator Pilot visually acquired, unaided, what appeared to be traffic at the same altitude as the C-130 flew south. A check of the TCAS display showed traffic approximately seven miles away which appeared to be flying near Laurinburg-Maxton Airport. Soon afterwards, the C27 Instructor Pilot occupying the right hand seat visually acquired traffic ahead at approximately the same altitude and assessed it as no risk. The radar recording showed the C-130 and an unidentified target corresponding to the C-27 passing each other approximately 2.7 miles apart with statements to the Investigation indicating that both aircraft had exercised ‘see-and-avoid’ at this time.

It was established that when the collision occurred, the C-130 had just completed a visual ‘Container Delivery System’ airdrop as part of a local area training mission and was exiting the Drop Zone (DZ) and levelling at 1500 feet QNH on a heading of 193°. The Co-Pilot was acting as PF and the Pilot was acting as PM with the Instructor/Evaluator Pilot occupying the supernumerary seat. The C-27 had just taken off from Laurinburg-Maxton Airport with the Instructor/Evaluator Pilot in the left hand seat and the Instructor Pilot in the right hand seat with the other pilot in the supernumerary seat. It was level at 1500 feet QNH and on a heading of 310° towards two waypoint DZs for simulated airdrops. The relative bearings of the two aircraft remained constant for two minutes prior to the collision and none of the pilots on either aircraft saw the opposing aircraft prior to impact. However, momentarily prior to impact there was non-specific awareness of an aircraft in the immediate vicinity by some members of the crew of both aircraft. 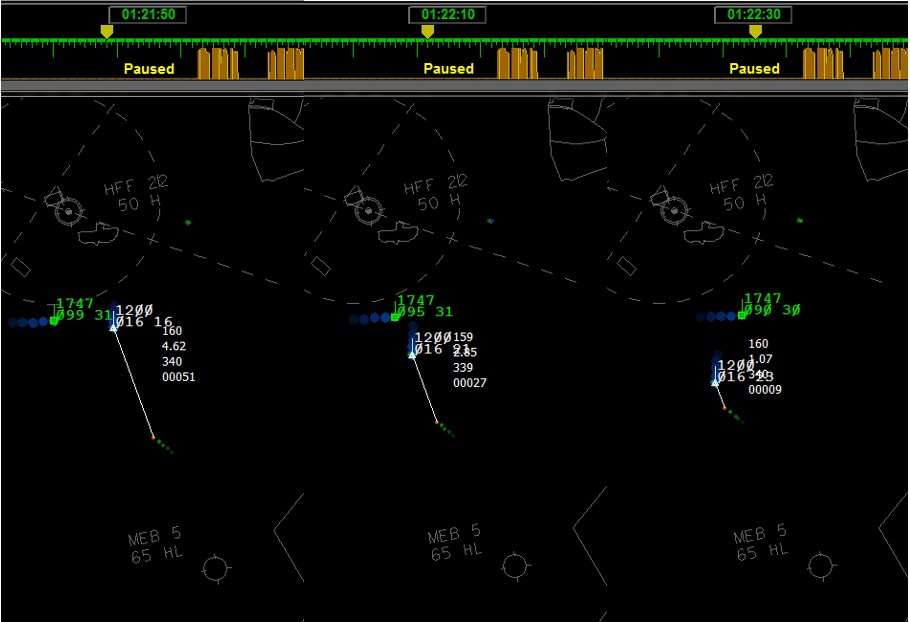 Three radar snapshots showing (from left to right) the relative positions of both aircraft at 50, 30 and 10 seconds prior to the collision. [Reproduced from the Official Report]

The right wingtip of the C-27 contacted and damaged the right underside of the C-130 at the nose gear door. The C27 then followed a path that detached the flare dispenser hood from the C130 lower fuselage and continued beneath the C-130’s right wing. Its vertical stabiliser passed immediately in front of the nose of the C-130 and between the propeller arcs of the number 3 and number 4 engines of the C130. The vertical stabiliser then hit the front of the C-130’s right external fuel tank and then hit the right hand side of the number 4 engine and the wing leading edge in the vicinity of its engine mount. The C27 sustained damage to its right aileron and rudder, but the aircraft could still be flown normally with no abnormal control inputs from the pilot. The C130 sustained impact damage to the vertical stabilizer, rudder, right outboard wing, right aileron, and empennage on impact. 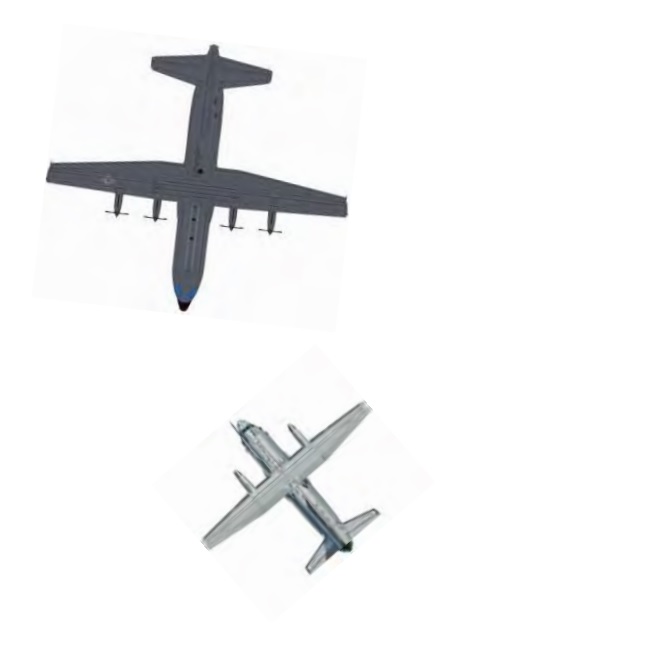 The ground tracks of the two aircraft just prior to their collision. [Reproduced from the Official Report]

One second after impact, the C130 number 4 engine rpm began reducing rapidly and the Pilot ordered its emergency shutdown. Movement of the number 4 engine Condition Lever to the ‘feather’ position did not result in the commanded effect and significant drag was generated. The aircraft “turned 27 degrees right, climbed 519 feet and lost 49 knots of airspeed over the course of one minute before the PF began to stabilise control of the aircraft”. Constant airframe vibration which was significantly greater than anything previously experienced by the crew was present until the malfunctioning engine and its propeller had been secured.

Meanwhile, there were no noticeable changes to the performance of the C27, no visible damage was detected and no systems were lost. However, it declared an emergency and completed a landing at nearby Mackall AAF just over three minutes after the collision had occurred and stopped on the runway where both engines were shut down because of the unknown extent of damage sustained. The C130 crew declared an emergency and decided to recover to Pope AAF. They did not carry out a controllability check due to the unknown condition of the aircraft and the extent of its ability to remain flyable. Twenty minutes after the collision had occurred, a flapless landing at Pope AAF was made following flight without further event. Once the aircraft had stopped, fuel could be see leaking from the right wing and an emergency evacuation was initiated. A subsequent inspection of the runway found fuel and some pieces of the aircraft along the length of the runway.

The Investigation subsequently confirmed that neither the IFF transponder nor the TCAS on the C27 were functioning prior to impact. It was determined that it was the absence of a functioning C27 IFF transponder which had prevented the C-130 TCAS from detecting the aircraft and the absence of a functioning TCAS due to this IFF failure which had prevented the C27 from detecting the actively transmitting IFF transponder of the C-130. It was found that the C27 had a history of intermittent TCAS malfunctions with no corrective action having been pursued.

It was noted that the weather conditions and specifically the in-flight visibility had played no part in the collision and that there had been 70% illumination from the waxing gibbous moon under clear skies. In concluding that the collision could be primarily attributed to the failure of both crews to perform effective visual scanning, it was noted that less can be seen at night than by day and human visual acuity is also reduced at night so that a visual scan at night must be greater regardless of the type of NVG being used. It was also noted that the NVG Field Of View (FOV) is less than that of the naked eye and particularly reduces peripheral vision, although the NVGs in use in both aircraft had a relatively good +/- 40° FOV.

In respect of structural restrictions on the FOV of the four pilots in the operating crew seats at the time of the collision, it was noted that both aircraft flight deck windshields consisted of segmented sections separated by window posts. Whilst this increases the strength of the windshield during pressurised flight, increases its resilience to bird strikes and reduces maintenance costs and is a common feature in large aircraft, it impedes pilots’ ability to conduct an uninterrupted visual scan. As a consequence, pilots are recommended to move their heads to see around blind spots caused by fixed aircraft structures or even to manoeuvre the aircraft to facilitate their scans.

It was noted that the field of view of the C27 Instructor/Evaluator Pilot out of the right side of the aircraft was significantly obscured by both large window posts and the helmeted Instructor Pilot in the right hand seat. The latter’s attention had been distracted as he was looking down and to the left at the centre pedestal and even if he had been scanning outside, his view would have been impeded by some of the same aircraft structure. In the case of the C130, both the left and right seat pilots had been scanning but their views had been partially obscured by window posts and in the case of the right seat PF additionally by the combing-mounted Plan Position Indicator (PPI). The PF was also intentionally directing his scan to the right to clear for an imminent right turn. A general forward view of each aircraft’s flight deck and the views from all four positions towards the side where the opposite traffic was coming from are shown below.

The Windshield of the C130 (left) and the C27 (right) showing the effect of aircraft structure on the view and in the case of the C130, the position of the PPI. [Reproduced from the Official Report] 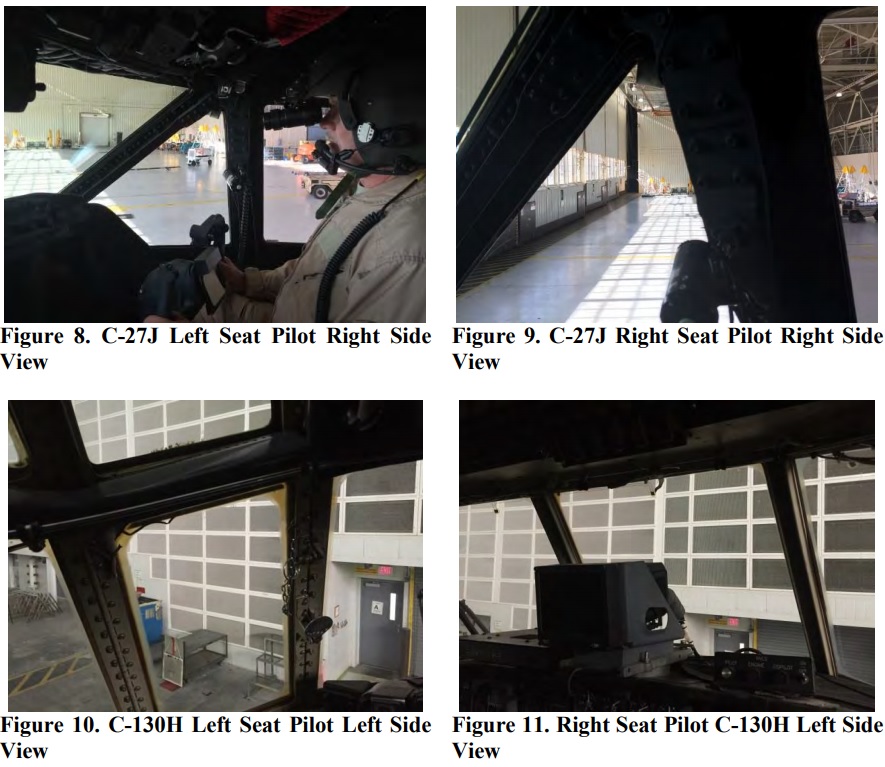 Left and right seat views in the direction of the undetected opposite direction traffic. [Reproduced from the Official Report]

The Cause of the accident was found to be “a breakdown in visual scan resulting in insufficient clearing of the aircraft flight path by both aircrews”.

The Final Report of the USAF AIB Investigation was approved on 12 March 2015 and subsequently made available without restriction.