On 11 January 2018, a privately-operated Cessna 525A Citation with a two-pilot English-speaking crew made a night takeoff from Reykjavik without clearance passing within less than a metre of a vehicle sanding the out-of-service and slippery intersecting runway as it rotated. The Investigation noted that the takeoff without clearance had been intentional and due to the aircraft slipping during the turn after backtracking. It also noted that the vehicle was operating as cleared by the TWR controller on a different frequency and that information about it given to an inbound aircraft on the TWR frequency had been in Icelandic.

On 11 January 2018, a Cessna 525A Citation (N525FF) being operated privately with a two-pilot crew and one passenger took off from runway 19 at Reykjavik for an unrecorded international destination in normal night visibility without the TWR controller noticing. As it reached the intersection of runways 19 and 13 and was about to get airborne, a vehicle carrying out sanding on out of service runway 13 appeared from the left as rotation was imminent. The Cessna passed over the top of the vehicle with an estimated vertical clearance of “less than 1 metre”. 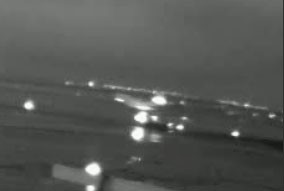 The aircraft clearing the vehicle by what was suspected to have been “less than 1 metre”. [Reproduced from the Official Report]

An Investigation was carried out by the Iceland Transportation Safety Board (ITSB). Airport CCTV and ATC radio communication records were the primary sources of information.

It was noted that the 68 year-old PF had a total of around 21,000 flying hours which included 2,670 hours on type. No information was provided about the First Officer's experience. The pilots were both English speakers and so, in accordance with prevailing Icelandic regulations, ATC communications with the aircraft were conducted in English.

On the morning of the occurrence, the measured braking action on both runways was poor and the temperature was around freezing. The TWR controller requested the airport service department to sand both runways and do runway 13/31, the one with the lowest measured braking action, first. The allocated sanding vehicle would begin work from the north western end of the runway and treat the right hand side first - see the annotated aerodrome diagram below. 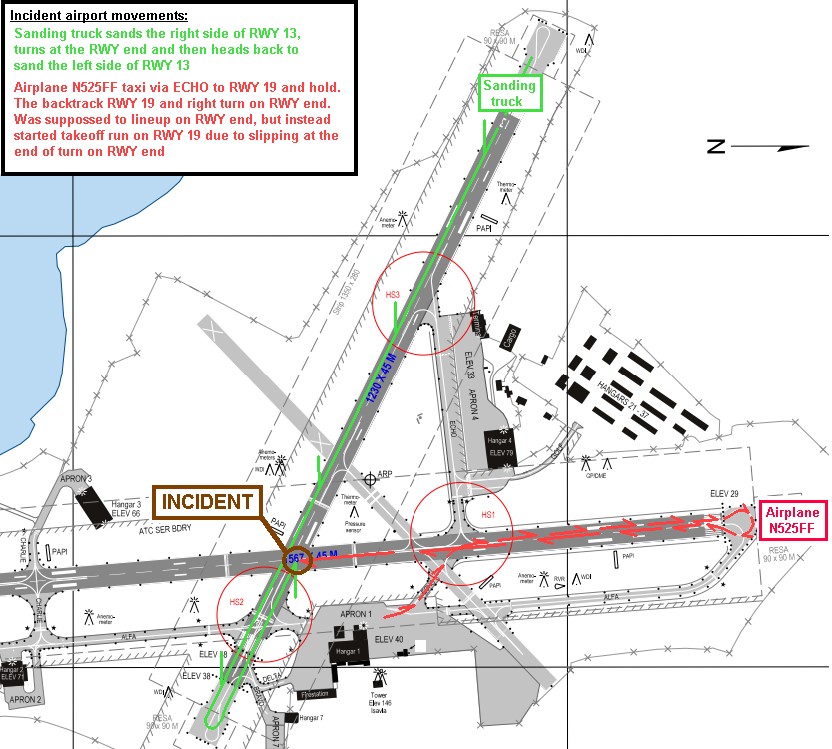 The ground tracks of the aircraft and vehicle involved. [Reproduced from the Official Report]

Meanwhile, the Cessna was taxiing for departure and the TWR controller passed the current braking action measurements and asked if they were sufficient for takeoff, to which the response was that they were. The controller instructed the aircraft to hold short of runway 19, which was correctly acknowledged. The APP controller then called the TWR controller to advise that the first of two expected inbound aircraft had been transferred to TWR and that aircraft duly checked in on the TWR frequency. The initial and subsequent exchanges with this aircraft which included information on the poor braking action on both runways and the fact that sanding was in progress on runway 13, were conducted in Icelandic rather than English. The inbound aircraft crew advised that they would enter the hold until the runway 13 sanding had been completed and its braking action was better. Concurrently, the TWR controller was communicating with airside ground vehicle traffic on a separate frequency (168.8 MHz) also in Icelandic. Soon afterwards, the TWR controller instructed the departing Cessna to “525FF backtrack line up runway 19” and received a readback of “backtrack runway 19, 525FF”.

The TWR controller received a call from airport ground services on frequency 168.8 MHz on the progress of the approved 13 sanding operation and told them that one inbound aircraft was holding until runway 13 was available and that the Cessna would be taking off from runway 19 once the runway 13 sanding had been completed and before the runway 19 sanding commenced. This conversation was held in Icelandic. Then, the TWR controller called the Cessna on the TWR frequency and said “N525FF right turn line up runway 19” and received the readback “line up runway 19, 525FF”.

For the next three minutes, the TWR controller used the GND frequency (121.7 MHz) to communicate with the crew of an aircraft getting ready to depart, with airport ground vehicles on frequency 168.8MHz and by landline with the APP controller. All these communications were in Icelandic. At the same time, the sanding vehicle had reached the south eastern end of runway 13/31 and had turned round and begun to treat the opposite side of the runway to complete the task.

The TWR controller did not notice that the Cessna had started its takeoff roll on runway 19 after having turned at the end of the runway. As the sanding vehicle heading northwest on runway 13/31 was about to cross runway 19, its driver reported having “noticed an aircraft very close on runway 19 on his right side which was just about to lift off” and that he had not had enough time to react. CCTV evidence showed that the sanding vehicle was on the runway 19 centreline when the Cessna reached the intersection and that it had flown over the vehicle with what was “believed to have been a clearance of less than 1 metre!”.

The PF of the Cessna subsequently stated that he recalled being cleared to taxi and backtrack runway 19 and as they had turned round to line up, he had increased the thrust significantly and the aircraft had started to slide on the ice, so he had said “we have to go” and had immediately commenced the takeoff. He also stated that as they had turned round at the end of runway 19 to face the takeoff direction, the PM had transmitted that they were “ready for departure” but there was no evidence on the ATC TWR frequency recording that this supposed transmission had taken place.

ATC use of language for airside communication

The Conclusions of the Investigation were as follows:

The Final Report of the Investigation was completed on 7 February 2019 and subsequently published.