On 15 March 2012, a Royal Norwegian Air Force C130J-30 Hercules en route on a positioning transport flight from northern Norway to northern Sweden crossed the border, descended into uncontrolled airspace below MSA and entered IMC. Shortly after levelling at FL 070, it flew into the side of a 6608 foot high mountain. The Investigation concluded that although the direct cause was the actions of the crew, Air Force procedures supporting the operation were deficient. It also found that the ATC service provided had been contrary to regulations and attributed this to inadequate controller training.

On 15 March 2012, a Lockheed-Martin C130J-30 Hercules being operated by the Royal Norwegian Air Force on a positioning transport flight from Harstad/Narvik Airport, Norway to Kiruna, Sweden flew into the side of the highest mountain in Sweden near its summit shortly after crossing the Swedish border and making a daylight descent to FL070 which took it into Instrument Meteorological Conditions (IMC) in uncontrolled airspace. The aircraft was immediately destroyed by the violent impact, consequent explosion and fire and all five occupants were killed.

An Investigation was carried out by the Swedish AIB. The DFDR and Cockpit Voice Recorder (CVR) were recovered and their data successfully downloaded and recorded radar data was also gathered and used. The ELT did not transmit and was found to have sustained major damage at impact. It was found that the response on the ground to the accident had been “characterised by very good access to resources from both Sweden and abroad” and noted that “operations lasted for a relatively long time and were carried out under extreme weather conditions in difficult alpine terrain”. However, the Investigation did identify “the importance of further developing management, collaboration and training (in respect of response to remote area accidents) in several areas”.

It was noted that the aircraft commander had 758 hours experience on the ‘J‘ model of the C130 after accumulating almost all his considerable previous experience on older Hercules variant(s) with considerably less automation than the ‘J’. He was accompanied by a Co-Pilot who had been acting as PF for the accident flight who had just 91 hours on the ‘H’ model and only 293 hours on all Hercules variants. The significantly increased level of automation on the ‘J’ Variant was noted to have led to the removal of a crew position for a Navigator as carried on all earlier variants. Several of the Air Force personnel interviewed by the Investigation “stated that the (accident aircraft) commander was considered to be the most experienced commander by far on the C-130” and that whilst the co-pilot was considered to have “little” experience, he was “competent”, had “respect for the commander” and that it was “difficult to surpass the co-pilot with regard to knowledge of systems on the aircraft”. It was additionally noted that the aircraft commander had a lower military rank than the Co-Pilot and that the Co-Pilot was his immediate superior, although no direct evidence that this situation had an effect on the conduct of the flight was found by the Investigation. Also on board the aircraft were two loadmasters and one passenger, the latter being an Air Force helicopter pilot.

An aftercast provided by the Swedish Meteorological and Hydrological Institute stated that there had been a thick and continuous layer of cloud in the area where the accident occurred with a base of between 1000 feet and 4000 feet and a top at between FL090 and FL100. By contrast, the Meteorological Terminal Air Report (METAR) for Kiruna issued 7 minutes before the accident gave “CAVOK”.

It was established that after departing from Harstad/Narvik on an Instrument Flight Rules (IFR) FPL, the aircraft had climbed to FL 130 and taken up a holding pattern south of the airport for an hour before continuing on an easterly track towards the VOR at destination. Bodo Control had radar contact before handing the aircraft over to Sweden Control where it was cleared for descent to FL 100 “when ready” and instructed to contact TWR at destination to make their request for a visual approach. Having acknowledged the clearance, the crew then immediately commenced the descent from FL130 towards FL100 and, on checking in with Kiruna TWR, advised that they were 50 nm to the west and requested a visual approach. Kiruna TWR further cleared the aircraft which by then had descended below FL 125, the base of controlled airspace in the area, to FL 70 and the aircraft continued to descend towards that level, in the process descending below both MSA and into IMC. The aircraft reached FL70 and, based on DFDR data, it was found that 30 seconds later, in level flight and at a ground speed of approximately 280 knots, it had collided with the terrain just below the highest parts of the west side of the highest mountain in Sweden, ‘Kebnekaise’ some 42 nm from Kiruna. CVR data showed that the crew had been unaware of their proximity to terrain. The illustration below shows the format of the annotated 1:500,000 chart provided for the flight, on which the proximity of the intended track is clearly shown as passing over Kebnekaise. As can be seen, this chart only had “maximum elevation” figures for Norwegian airspace. On the Instrument Flying Charts carried on board, the Minimum Sector Altitude for the route was shown as 9300 feet. 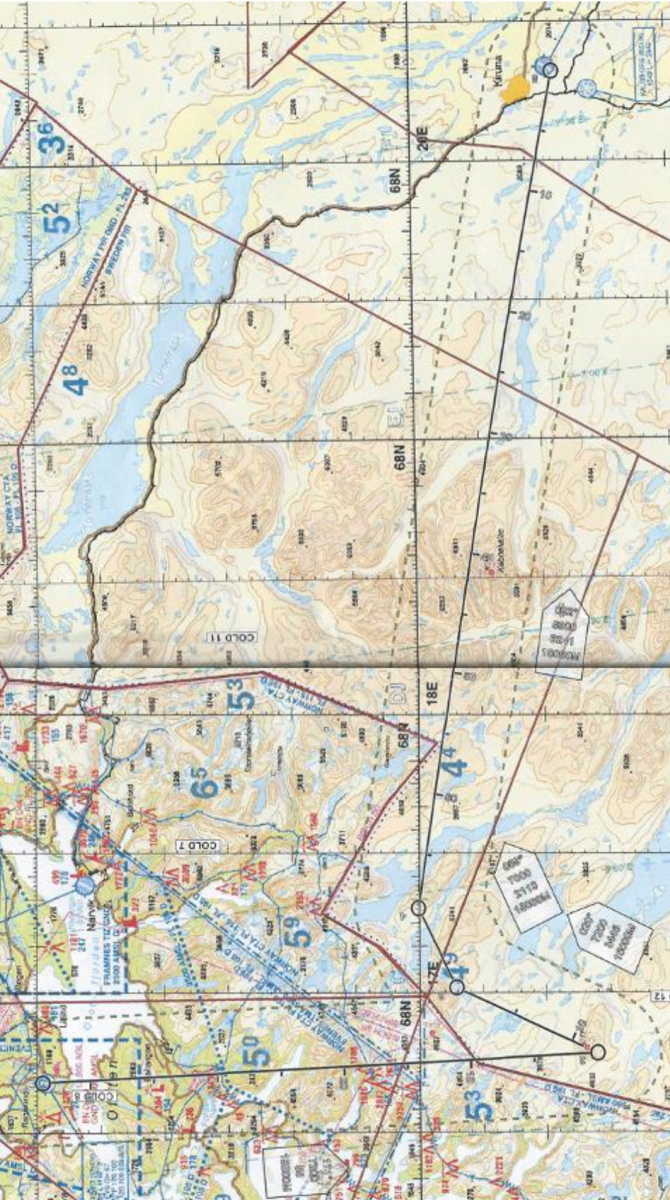 Chart prepared for the accident flight by the Air Force showing the planned route with Maximum Elevation Figures (MEF) only on the Norwegian side of the border. (illustration reproduced from the Official Report)

Whilst it quickly became clear that the accident had been attributable to the way in which the aircraft was operated by the crew concerned, the Investigation identified the root cause of it to be deficiencies in the RNAF procedures which supported the operation of the aircraft. It was also found that there had been “shortcomings” in the ATC clearances issued to the aircraft. Clearances and flight information given to the accident aircraft were found not to have been in accordance with the applicable regulations. This was considered to have been a direct consequence of the ANSP “not having…ensured that the air traffic controllers in question had sufficient experience and knowledge to guide air traffic from the west in towards Kiruna Airport in a safe manner under the present circumstances”.

The airspace and terrain profile along the route. Showing the official position on Swedish ATC radar coverage “in optimal conditions”. The broken red line shows the route of the accident aircraft in schematic form (the altitude scale exaggerated. The terrain profile is derived from Google Earth (illustration reproduced from the Official Report)

Controllers at Sweden Control interviewed by the Investigation reported that the accident aircraft had not been visible on radar, and that the base of radar cover in the area varied on a day-to-day basis between FL070 and “slightly above” FL100 - a somewhat different view to the official position of the ANSP illustrated above. Kiruna ATC was a one-man TWR operation without radar.

Clearly one of the major questions for the Investigation to answer was why no warnings were given of the approach of the aircraft to the steeply rising mountainside which the aircraft hit. The primary - and usually very reliable - equipment which does this is the GCAS/GPWS/TAWS (Ground Collision Avoidance System / Terrain Awareness Warning System). The GCAS system was activated only on the basis of downward looking radio altimeter input, which at any alert setting would not have provided a useful warning as the aircraft approached the very steep side of the mountain. The database-driven TAWS, on the other hand, would normally have been capable of generating sufficient warning of terrain ahead for a successful escape manoeuvre to be facilitated. However, as a military aircraft, the TAWS could be selected to utilise one of a choice of two databases, a commercial database provided by Honeywell when selected to the default ‘Normal’ Mode and a higher resolution tactical database provided by the US National Geospatial Intelligence Agency (NGA) when selected to ‘Tactical’ Mode. However, the latter database was not available north of 60° North and, therefore, not available over most of the land area of both Norway and Sweden (although the separate Obstacle database was available worldwide from both sources - but there were no obstacles on Kebnekaise).

Early on, the accident crew had decided to select the TAWS Tactical Mode thereby, because of the high latitude, completely disabling the TAWS function. Whilst such action was contrary to the pertinent SOP, which stated that the Tactical Mode was “most suited for modified contour flight and approaches at low altitudes in accordance with Visual Flight Rules”, the commander was left with absolute discretion and no mention was made of the fact that most of the Scandinavian land area is north of 60° where this mode has no terrain database. The Investigation concluded on the basis of interviews and the wording of a pilot alert on the subject following the accident that “awareness of the (C130J) TAWS system function and limitations north of 60° N….was low”.

The Investigation sought possible explanations for the conscious choice of TAWS Tactical Mode by the accident aircraft crew and concluded that there were “a number of partial explanations” for this action, the most significant of which appeared likely to be “lack of understanding of the system's function”.

In respect of other equipment which might have supported the use of the paper charts carried in informing proactive terrain avoidance, it was also noted that the aircraft had an advanced radar which was capable of both weather detection and, in ‘ground map’ mode, terrain detection with ground contour display for up to 250 nm ahead. It was also equipped with a Moving Map display that could be presented on the EFIS screens and could show current aircraft position in relation to terrain and indicate terrain elevation, obstacles, latitude/longitude and obstacle-free altitudes to an accuracy of 200 feet.

The Investigation concluded that the Cause of the accident was “the crew of the accident aircraft not noticing the shortcomings in the clearances issued by the air traffic controllers and to the risks of following these clearances, which resulted in the aircraft leaving controlled airspace and being flown at an altitude that was lower than the surrounding terrain”.

It was also concluded that the following Organisational Shortcomings in safety rendered the accident possible:

Safety Action was noted to have been taken following the accident and during the course of the Investigation by the Royal Norwegian Air Force, The Swedish ATC Regulator, the Swedish ANSP and the aircraft manufacturer Lockheed Martin. Action reported by the latter included:

A total of 22 Safety Recommendations were made as a result of the Investigation as follows - the first 11 related to the operation of the aircraft and the provision of ATC service and the remaining 11 related to shortcomings found in the processes for ensuring effective accident response in such a remote area:

The Final Report was published on 22 October 2013 and made available in English translation on 31 October 2013.