On 15 November 2013, a privately operated Cessna 310 about to land at Hawarden crashed after power was lost from one engine and the experienced pilot appeared to have attempted to initiate a go around rather than land on the grass next to the runway. The Investigation found that both main fuel tanks were effectively empty after normal fuel use during the flight and since unused fuel remained in the auxiliary tanks, it was concluded that fuel starvation attributable to en route fuel system mismanagement had occurred. The other engine had been at full power but with fuel starvation imminent.

On 15 November 2013, a privately operated Cessna 310Q (G-BXUY) about to land on runway 22 at Hawarden UK in day Visual Meteorological Conditions (VMC) after a flight from Lognes-Emerainville, France was seen to deviate to the left of the runway and appeared to become unstable before it pitched up, rolled to the left and impacted the ground in a steep nose-down attitude. The two occupants were seriously injured and both died shortly afterwards. The aircraft was destroyed. 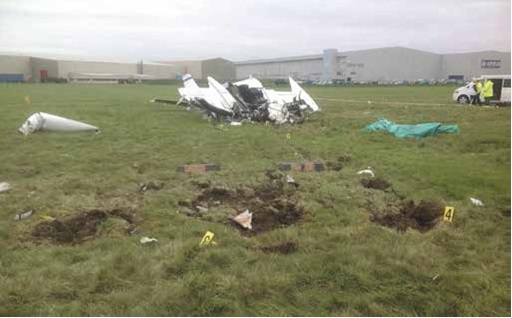 The accident site (Reproduced from the Official Report)

An Investigation was carried out by the UK AAIB. The aircraft was not fitted with an Flight Data Recorder (FDR) and was not required to be but a tablet computer which the pilot had been using for flight planning purposes was recovered from the wreckage and useful data was subsequently downloaded from it.

It was noted that the 58 year old pilot had held a PPL(A) since 1996 and in 2000, he had also gained a PPL(H). He had followed these with a CPL(A) in 2002 and a CPL(H) in 2003 although he had only ever used the private pilot privileges of these licences. He had intermittently held an MEP rating and had most recently renewed it in August 2013 flying the accident aircraft which he owned and had accumulated 261 hours on. The examiner who renewed his MEP rating in 2013 described the pilot's flying as "competent, including his single engine handling". The pilot’s father, who was also an experienced private pilot, described his son as being "competent and meticulous".

In respect of fuel, it appeared that the pilot was "known for always using a dipstick to measure fuel quantities before flight rather than relying on fuel gauges and would have been aware of the exact quantity of fuel required for a flight". He was also described by more than one source as "being very sensitive to fuel economy and aware of fuel prices at different airfields". It was noted that the pilot had not flown the aircraft, which he owned, for five years until three months prior to the accident when it returned to service after "an extensive refurbishment programme".

The accident flight had departed from Lognes-Emerainville aerodrome, to the east of Paris after filing a Visual Flight Rules (VFR) flight plan to Hawarden. Initially, the flight had remained at 1500 feet beneath controlled airspace near Paris before a climb to 4500 feet for the Channel crossing for remainder of the flight. All the evidence pointed to an entirely routine flight right up to the control problem just before landing.

When the aircraft was below 50 feet and about to land on runway 22 in benign weather conditions after a flight of almost three hours, a number of witnesses on the ground reported a range of observations that collectively indicated that the aircraft had suddenly been seen to drift left of the runway before an aircraft control problem followed by abnormal noises from the engines became evident. The aircraft was described as appearing briefly unstable before the left wing dropped, the aircraft rolled rapidly to the left and struck the ground nose first. Both occupants were found trapped in the wreckage but alive but one died at the scene and the other shortly afterwards.

Global Positioning System (GPS) position data from the recovered tablet computer was used to reconstruct the final stages of the flight - see the diagram below: 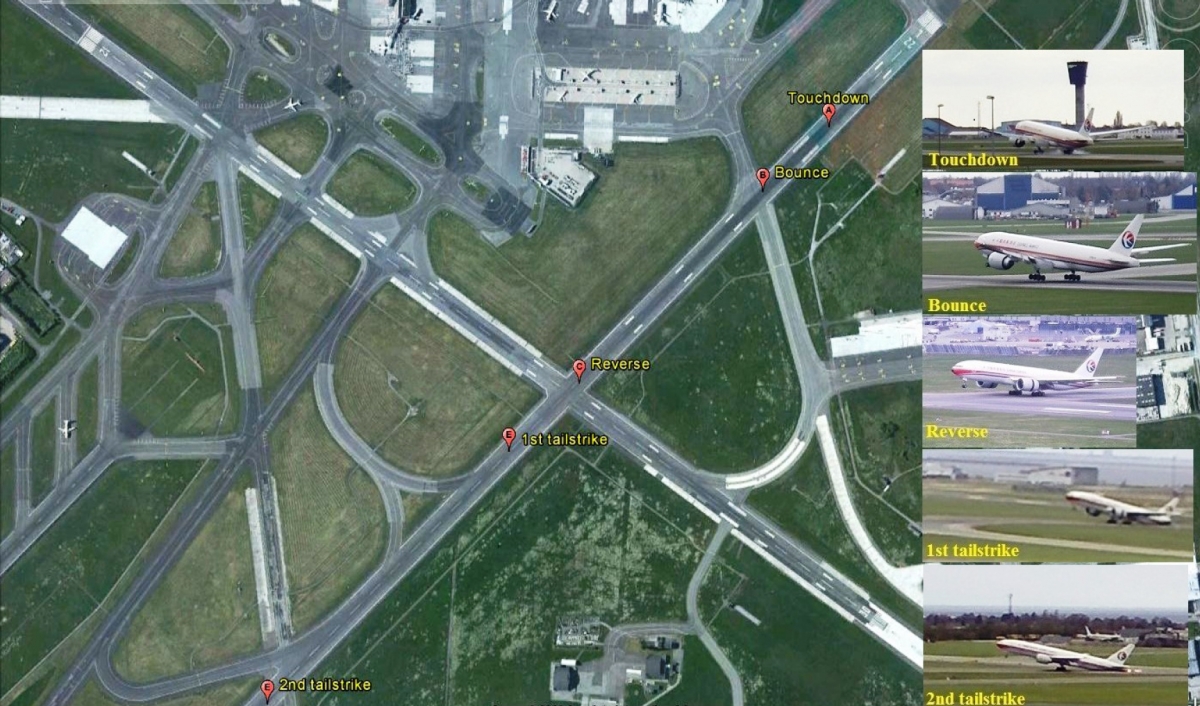 It was noted that the aircraft had four fuel tanks, two mains holding 193 litres each and two auxiliary holding 78 litres each. The latter were intended to be used in the cruise and were not equipped with their own fuel pumps, so their use below 1000 feet agl was not recommended.

After the accident, both engine throttle levers were found set fully forward and both fuel tank selector switches set for feed from the main tanks with the crossfeed closed. The quantity of fuel in the undamaged left main fuel tank was "too small to recover on site". The right main fuel tank was "assessed…..unlikely to have held more than about 10 litres of fuel, probably less". The right engine fuel injection manifold valve was found full of fuel, but the left engine valve was only approximately half full. It was found that there had been approximately 30 litres of fuel in each auxiliary tank. Analysis of the available evidence suggested that immediately prior to impact, it was likely that the left constant speed propeller had been in fine pitch and the right at a pitch angle of 15° - suggesting that the engine could have been at full power.

To the extent possible, a detailed examination of the pilot's pre flight fuel planning and flight progress was undertaken in the light of his known priority not to carry unnecessary fuel especially when, as in this case, he knew that the price of fuel at the destination would be cheaper than at the point of departure. There was no evidence that the pilot had monitored actual flight progress against the assumptions which had informed his departure fuel decision and pre departure fuel uplift. It also appeared at least possible that he had used a still air assumption for fuel planning although this would have made little difference to the estimated flight time. The actual progress of the flight was found to show that for some undetermined reason, the initial part of the flight until crossing the south coast of England, had taken slightly longer than expected but thereafter had been nearer to that which would have been expected.

The time / fuel required for the flight found on the tablet computer was 2 hours 34 minutes / 206 litres. A calculation using the en route forecast available to the pilot pre flight gave 2 hours 41 minutes / 215 litres. The actual flight time was 2 hour 57 minutes and was calculated to have required 236 litres. With departure fuel estimated to have been just over 300 litres including 60 litres in the auxiliary tanks which appeared unlikely to have been selected for long if at all en route, it was clear that fuel starvation prior to landing had been a real possibility.

Once the left engine had run down it was noted that a successful go around was not assured even with continued availability for the right engine. It was noted that the Owner's Manual stated that:

"Although the aircraft is controllable at the minimum control speed [86 MPH], the aircraft performance is so far below optimum that continued flight near the ground is improbable. A more suitable recommended safe single-engine speed is 105 MPH Indicated Airspeed since at this speed, altitude can be maintained more easily while the landing gear is being retracted and the propeller is being feathered."

A review of the assembled evidence concluded that it was "all consistent with a go-around attempt, during which the pilot would have selected full power". It was considered possible - and noted that there was some witness evidence to support this - that the left engine may have responded to the pilot's selection of full power, but only for a very short time. It was considered that the pilot would have been unable to control the left yaw and roll created by the asymmetric power.

The formally-stated Conclusions of the Investigation were, in full, as follows:

The majority of usable fuel at the time of the accident was in the auxiliary tanks, which were not selected for engine feed. From the available evidence, it is probable that the pilot originally intended to complete the flight using fuel from the main tanks only, and loaded them with what he considered to be a sufficient quantity. However, the main fuel tank quantity was insufficient for safe completion of the flight. Options to use auxiliary tank fuel or to land and refuel would have been available to the pilot.

With no evidence of a prepared fuel plan, and in the absence of any obvious concernon the part of the pilot, he appears to have continued to believe that the fuel in the main tanks alone was sufficient, albeit with a greatly reduced reserve. Although he would not have intended or expected to land with such a low fuel state in the main tanks, the fine weather conditions of the day and his familiarity with Hawarden may have been factors in his apparent acceptance of the situation.

The accident occurred when the pilot lost control during a single-engine go-around manoeuvre, after the speed had fallen below the minimum control speed. The investigation concluded that the loss of power on the left engine just before landing was due to fuel starvation which resulted from mismanagement of the aircraft’s fuel system."

The Final Report was published on 13 November 2014 . No Safety Recommendations were made.