On 8 September 2003, a privately operated Cessna 340 departing the apron at Copenhagen failed to follow its correctly acknowledged taxi clearance and took a different route which led it to pass the holding point of a runway on which an Air Greenland Airbus 330 had just received take off clearance. ATC observed the error and the clearance was cancelled so that no actual risk of collision had existed. The Investigation considered that the taxi error had occurred at a position conducive to such errors and criticised what it considered were the inappropriate designations of the taxiways involved.

On 8 September 2003, a privately operated and Canadian registered Cessna 340 which had just departed the apron for a flight to Wick, Scotland taxied in normal day visibility past the holding point of a runway on which an Airbus A330-200 being operated by Air Greenland on a flight to Kangerlussuak had just received take off clearance. ATC observed the error and the take off clearance was cancelled before take off had commenced.

An Investigation was carried out by the Danish AAIB with the assistance of recorded radar and communications data. It was noted that the incident had not been notified to the AAIB until two days after it had occurred. 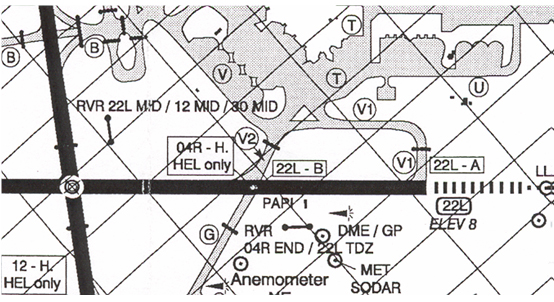 Airport layout in the vicinity of the incursion at the time of occurrence. Reproduced from the Official Report.

It was found that the 340 had been cleared by ATC GND to route via taxiway V but had instead chosen taxiway V2 which led it to enter the active runway. ATC GND noticed the error and stopped the aircraft and advised TWR of the situation, allowing the take off clearance to be cancelled so that no actial risk of collision had existed.

It was concluded that that: “The design and the use of certain taxiway designators at Copenhagen could lead to confusion and mistakes during taxiing. Flight crew might expect that the taxiways V1 and V2 would be segments of taxiway V, which could lead to misinterpretations of taxi instructions. It might be difficult during taxiing, especially for single pilot operations and/or at low visibility conditions, to be fully focused on the outside area (taxiways V, V1, V2 and T) and the taxi-chart at the same time.”

The Investigation found that the taxiway designators V, V1 and V2 were “inexpedient and (a) latent hazard to flight safety”.

Accordingly, one Safety Recommendation was made:

A Final Report of the Investigation was subsequently published and an English language translation made available.