On 11 February 2017, a Cessna 402 failed to stop on the runway when landing at Virgin Gorda and was extensively damaged. The Investigation noted that the landing distance required was very close to that available with no safety margin so that although touchdown was normal, when the brakes failed to function properly, there was no possibility of safely rejecting the landing or stopping normally on the runway. Debris in the brake fluid was identified as causing brake system failure. The context was considered as the Operator s inadequate maintenance practices and a likely similar deficiency in operational procedures and processes.

On 11 February 2017, a Cessna 402 (N603AB) being operated by Air Sunshine on a non-scheduled 35 minute passenger flight from St Thomas, US Virgin Islands to Virgin Gorda in the British Virgin Islands in day VMC with a single pilot and eight passengers on board was involved in a runway excursion at destination. When the pilot attempted to apply the brakes after touchdown on 795 metre-long compacted fine gravel surfaced runway 03, they did not respond normally and the aircraft failed to stop on it but remained within the aerodrome perimeter after deviating left to avoid an overrun into the sea. The aircraft was extensively damaged but none of the occupants were injured. 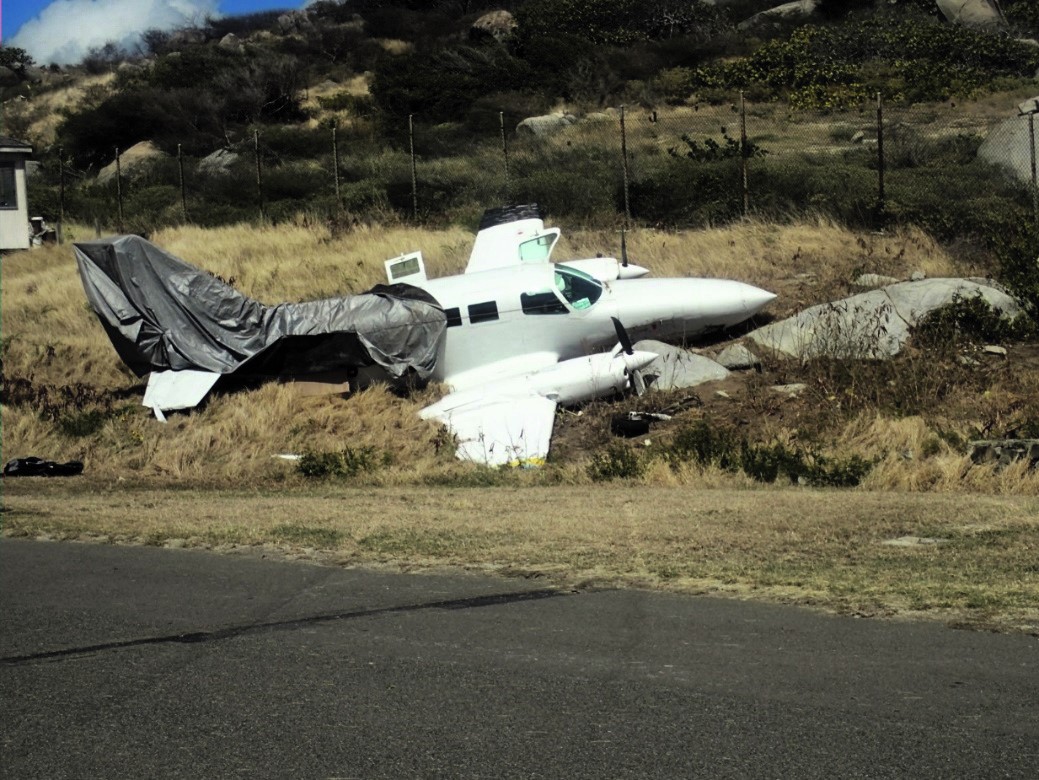 The aircraft in its final stopping position. [Reproduced from the initial Report]

A Field Investigation was carried out by the UK AAIB under arrangements authorised by the government of this British Overseas Territory. The aircraft was not fitted with flight recorders nor was it required to be. The 29 year-old Captain had 5,458 total flying hours of which 809 hours were on type and he had completed over 800 landings at Virgin Gorda, which is a PPR ‘special conditions’ airport, during the 12 months prior to the accident.

It was established that after touchdown and after first retracting the flaps, the pilot stated that when he had applied the brakes, they had responded although he had felt that “the right brake did not seem to respond as positively as he expected”. He further stated that he had re-applied the brakes but the left brake pedal had then “flopped to the floor”. Judging that he had insufficient room to reject the landing, he had continued to pump the brakes without gaining a response and had then shut down the engines before the aircraft left the runway, struck frangible signage and passed through a low retaining wall which caused the nose landing gear to collapse and the right main landing gear to break off. After encountering rising ground and colliding with a group of substantial rocks, the aircraft slewed through about 45° before coming to rest on a grass-covered bank within the airport perimeter close to the northern edge of the tarmac-surfaced ramp in front of the terminal building. The pilot then vacated the aircraft through his side window and opened the main door to allow the passengers to exit the aircraft. It was noted that “distinct tyre marks from all three wheels were visible across the apron and grass (which) indicated heavy sideward loading as the pilot tried to turn to avoid over-running into the sea”. There was no evidence that the brakes had been locked such as pronounced skid marks or any sign that loose stones had been dragged across the surface.

It was found that the aircraft had been in service for 41 hours and 95 flight cycles since its release from an approximately three year-long period in maintenance during which overhaul of both brake system master cylinders had been carried out that was reported to have involved cleaning them and installing new seals and springs. Records of this work were not available and the applicable FAA requirements under FAR 91.417 were found to require only that maintenance records must be retained for one year. 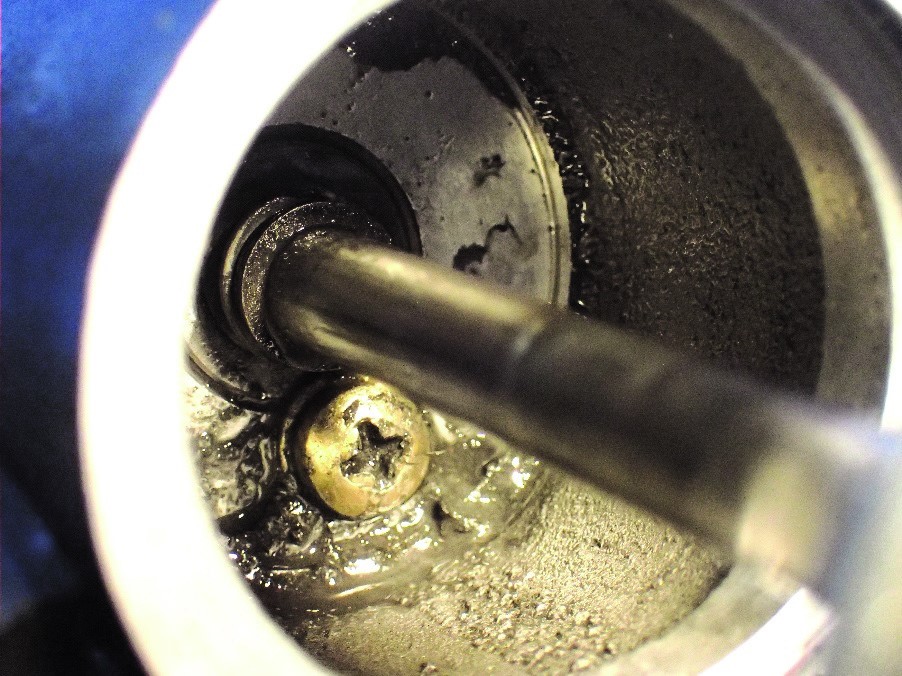 Debris in the left master cylinder oil reservoir. [Reproduced from the Official Report]

A detailed examination of the left side master cylinder (which served the left seat pilot position) found that its filler plug was missing, that the cover plate could be rotated using finger pressure and that the rubber ring seal between it and the cylinder housing was missing. Debris inside the cylinder was found to consist of “general environmental dirt and aluminium flakes” (see the illustration below) and when the piston rod and its return spring were removed, two pieces of a broken return spring were found at the bottom of the cylinder which, when placed together had a combined length that was approximately half a complete spring. Examination of the piston rod found further debris trapped between the piston seal and its adjacent washer which had been generated as a result of significant deterioration in the seal.

A similar examination of the other (right side) master cylinder found that its filler plug was also missing and that bronze bushing where the piston rod passes through the cylinder cover plate, which is supposed to be an interference fit had been secured with a tooth-lock washer and was otherwise loose in the cover plate. A similar amount and type of debris to that in the left cylinder was also found in this one, as was debris trapped between the piston seal and its adjacent washer which had originated from deterioration of the seal but to a lesser degree.

Although basic functional testing of both cylinders demonstrated that they could generate and hold pressure, it was considered that the effect of some of the anomalies found during the examinations described above on braking performance could have been significant. Other findings were considered to have been unlikely to have affected braking performance but were “indicative of a shortfall during maintenance”. These included the fact that in the case of both cylinders, the method used to attach the spring guides to the piston rods was contrary to that expected by the component manufacturer, with the evidence pointing to internal components from another manufacturer’s (permitted) master cylinder product having been incorrectly installed in the cylinders fitted to the accident aircraft. The one fault which was considered to be a possible immediate cause of brake pedal ‘bottoming out’ as occurred in the event under investigation was the significant deterioration in the condition of the piston seal washer on the left side cylinder. This would have been the worst case scenario arising from the fluid leakage which would have been occurring and was indicative of total brake failure.

Overall, it was considered that the contamination found in both cylinders and the degraded condition of the piston seal washers were “not typical of a master cylinder that has only accrued 41 hours since overhaul”.

It was noted that to obtain the necessary approval to operate into Virgin Gorda, Air Sunshine had to ensure that the aircraft could stop in 70% of the 795 metre LDA but the only figures offered to the Investigation were those in the Pilots Operating Handbook (POH) which were for a level and hard-surfaced runway using maximum effective braking. These figures were also based on the aircraft prior to its modification to add the wing vortex generators and without reference to a further STC-approved modification, the ‘Aircraft Payload Extender/Short Takeoff and Landing’ (APE STOL) modification which provided landing field length reductions of up to 25%’. They were therefore not valid for the aircraft or the runway surface and, in respect of the latter, it was noted that “typical surface conditions on a gravel runway may have an adverse effect on stopping distance as the loose unbounded material of the runway may degrade braking performance compared to a hard surface”. It was also found that even using the figures in the AFM Supplement for the APE STOL System, the aircraft did not satisfy the regulatory requirement applicable to all operations into Virgin Gorda that aircraft landing there must be able to stop in 70% of the LDA “even before the distance was factored for the gravel runway performance”. The fact the aircraft had routinely been able to stop in the distance available was due to the safety margin intended for contingency purposes being used on normal landings.

It was found that no guidance was provided to Air Sunshine pilots on how to calculate an LDR, how to factor for a gravel surface, or even that a LDR was to be calculated at all. It was also found that retraction of the flaps at speed during the landing roll was contrary to AFM guidance where such retraction is only applicable to light weights when the accident aircraft touched down only 77 kg below the MLW and although retraction “would have compromised the landing performance as set out in the performance tables”, it was “a common company procedure”.

It was noted the same aircraft had been involved in a previous accident at Virgin Gorda in March 2008 with the “official narrative” of the event stating that when the pilot attempted to stop the aircraft after landing, “the left brake failed during the second application (and) in an effort to avoid running off the end of the runway and into the ocean the pilot applied left rudder and made a turn in the direction of the apron”. The result of this action was that “the aircraft crossed the apron and struck the terminal building with the right wing, the tail of a parked Aztec with the left wing and came to rest after hitting the security gate at the end of the terminal building” and sustained substantial damage.

The formally-documented Conclusions of the Investigation were as follows:

The aircraft landed at Virgin Gorda in conditions (of weight, altitude, temperature and surface condition) where the landing distance required was very close to the landing distance available and without the required safety margin. Hence, when the performance of the brakes was not as expected, probably due to debris in the braking system, the aircraft could not be stopped on the runway.

Analysis of the maintenance state of the aircraft involved in this accident indicated that the maintenance capability, processes and planning of its operator were not consistent with the standards expected in conducting international passenger charter services. This appeared also to be the case for the operational procedures and data management.

Two Safety Recommendations were made as follows:

The Final Report of the Investigation was published on 8 March 2018.