On 19 November 2010, a Cessna 501 being operated by The Frandley Aviation Partnership on a domestic cargo flight from Belfast Aldergrove to Birmingham continued descent on an initially visual day ILS approach to Runway 15 into IMC and until collision with the ILS GS aerial adjacent to the intended landing runway occurred. The aircraft caught fire and was destroyed. Both pilots were injured, one seriously.

On 19 November 2010, a Cessna 501 being operated by The Frandley Aviation Partnership on a domestic cargo flight from Belfast Aldergrove to Birmingham continued descent on an initially visual day Instrument Landing System (ILS) approach to Runway 15 into Instrument Meteorological Conditions (IMC) and until collision with the ILS GS aerial adjacent to the intended landing runway occurred. The aircraft caught fire and was destroyed. Both pilots were injured, one seriously.

An Investigation was carried out by the UK AAIB. It was noted that the purpose of the accident flight was the carriage of a transplant organ. The aircraft was not required to carry Flight Data Recorder (FDR) or Cockpit Voice Recorder (CVR) but ATC radar recordings were available.

It was established that the First Officer had been acting as PF, that the aircraft had been cleared for an ILS approach to Runway 15 and the DA for this approach displayed. An attempt to intercept the ILS LLZ at a range of about 13nm had been made at significantly in excess of 250 knots with the AP engaged. The consequently slow capture had been speeded up by disconnection of the AP when about to cross the LLZ for the fourth time at an estimated range of 3nm after which the aircraft had become, and remained, fully established on the LLZ having descended slightly below the GS until about 5nm range.

Although the Automatic Terminal Information Service (ATIS) likely to have been received had not suggested any imminent deterioration in the prevailing Visual Meteorological Conditions (VMC), a fog bank was beginning to drift from the north towards the area of the Runway 15 final approach and TDZ. By the time the accident aircraft had reached a range of 5nm from touchdown, and just after giving a landing clearance, ATC had advised of the presence of a fog bank on the approach. The flight crew response was “we’ve got one end of the runway”. An IRVR of 1100 metres was transmitted to the accident aircraft shortly after it passed 2nm range but was not acknowledged. When the controller noticed that the IRVR had dropped to 500m, he reported having decided that it would be inappropriate to transmit this at what may be a critical time and shortly afterwards, with the whole aerodrome now “obscured by fog” reported seeing “a flash of orange and a pall of smoke” and activated the crash alarm.

The accident site is shown on the map reproduced below from the official report. 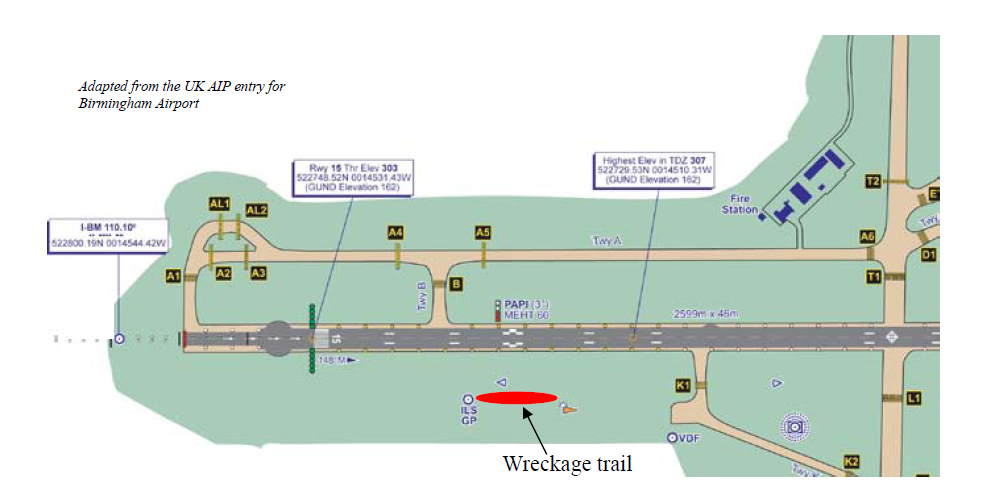 The accident site reproduced from the official investigation report

It was estimated that the fog bank had probably been entered by the accident aircraft round about the ‘100 above’ call. The applicable DA for the approach was 503 feet (equivalent to 200 feet aal). Having already lost visual reference, the First Officer then reported losing ILS LLZ indications during the final stages of the approach and asked the Captain if he should go around to which the response was “no, go left.”. Until this, the First Officer reported that he could not recollect hearing any calls from the Captain after the ‘100 above’ call.

After impact, a fuel fed fire had erupted at the left wing. The First Officer had escaped from the aircraft promptly via the main cabin door with only minor injuries but the Captain was trapped and sustained serious injuries. He had to await assistance from RFFS personnel wearing breathing apparatus before he could escape from the burning aircraft. The RFFS had difficulty locating the accident site in the thick fog but the first appliance found the aircraft some 3 minutes later and successfully suppressed the fire with foam. Other vehicles then arrived but one had become bogged down in the soft ground after its driver forgot to engage the differential lock.

The Investigation concluded that “the monitoring of this approach broke down in the latter stages and the crucial ‘decision’ call was missed, which led to the aircraft’s descent below minima.”

The Report of the Investigation AAIB Bulletin: 8/2011 EW/C2010/11/02 was published on 11 August 2011. Various safety actions taken by the aircraft operator and by the Airport Authority in respect of the RFFS were noted and no Safety Recommendations were made.