On 22 March 2013, a Cessna 525 inbound to Sion on a VFR clearance was flown into conflict with an IFR Piaggio P180 departing the same airport in compliance with its clearance and the prescribed separation between the two aircraft was lost in the vicinity of FL140. The Investigation concluded that an inappropriate ATC tactic had been employed in an attempt to achieve separation and recommended the development of a new procedure to better facilitate separation between IFR and VFR traffic in the airspace where the conflict occurred.

On 22 March 2013, a privately operated Cessna 525 (N600HS) being operated from Paris CDG to Sion and in descent to destination under Visual Flight Rules (VFR) lost prescribed separation in Class 'C' Airspace against an opposite direction Piaggio P180 Avanti ll (D-IKSI) which was also privately operated and had just departed Sion for Braunschweig, Germany under Instrument Flight Rules (IFR). Both aircraft were equipped only with Airborne Collision Avoidance System (ACAS) 1 systems, neither of which generated a TA and neither pilot saw the other during the crossing. 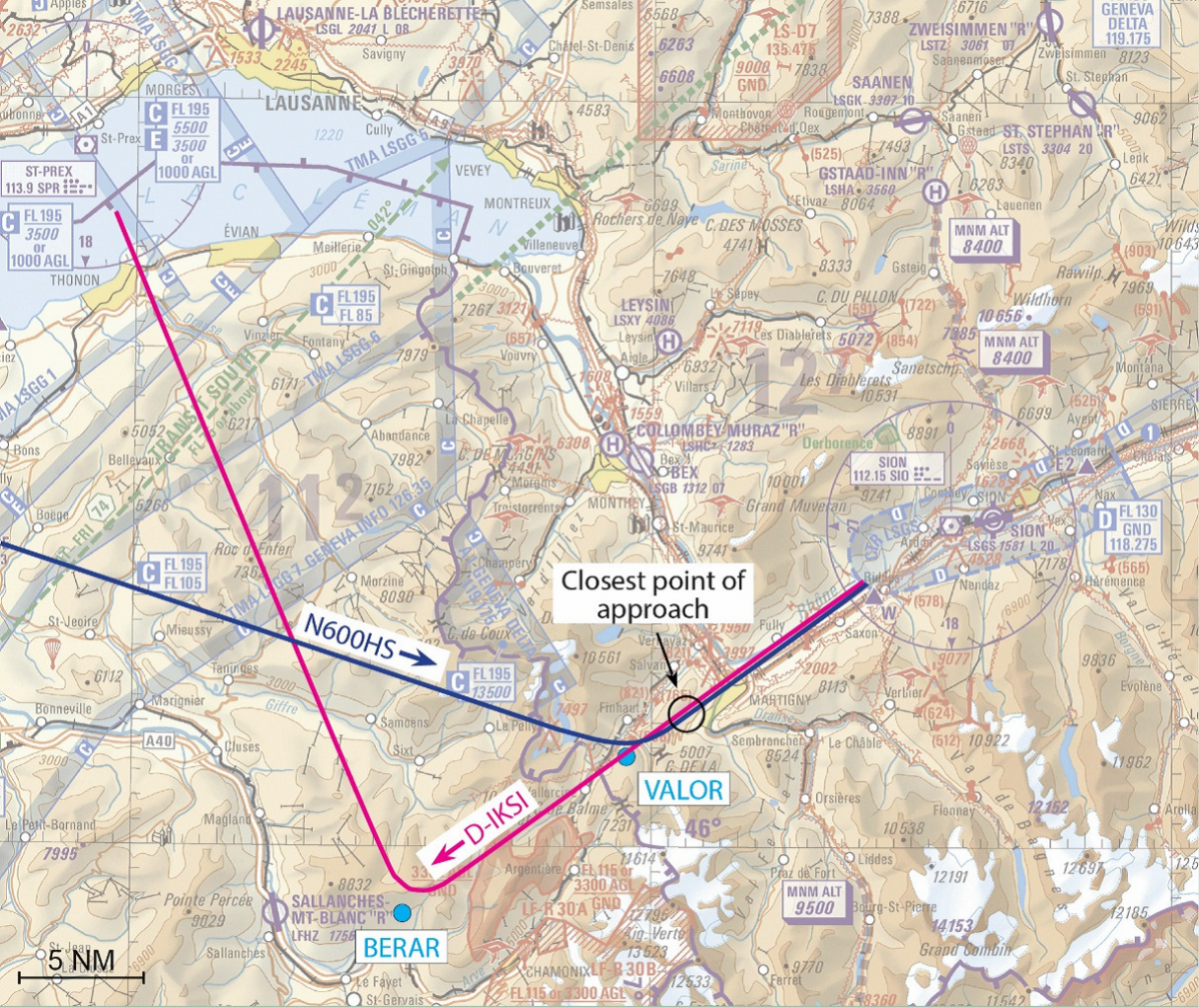 The tracks of the two aircraft involved. Reproduced from the Official Report.

It was noted that the conflict occurred in airspace classified as Class 'C'. The weather conditions were excellent, with no cloud below 26,000 feet and visibility in excess of 45 km. It was established that the Instrument Flight Rules (IFR) aircraft involved was being flown by two pilots but only the commander, occupying the left seat, was type rated; the other pilot was handling radio communications. The VFR aircraft involved was being flown by a single pilot. It was recorded that although both commanders had considerable professional flying experience, both had less than 250 hours on the aircraft types they were flying at the time of the investigated conflict.

It was established that the Citation had filed a Flight Plan which envisaged changing from instrument flight rules to visual flight rules at waypoint VALOR. Prior to VALOR, the aircraft was working Geneva ACC sector L123 and cleared to route towards VALOR via GVA at FL250.

Meanwhile, the Piaggio IFR departure from Sion in the direction of SPR was imminent and just before take-off, the Sion controller routinely coordinated the departure and the initial flight level with Geneva ACC INI SE sector by telephone. Shortly afterwards, the Citation was transferred to Geneva ACC INI SE sector and confirmed its intention to cancel IFR in the vicinity of VALOR. Descent to FL210 was given.

At this time, it was noted that the Swiss military flight service was active which means that military traffic has priority in airspace outside permanent ATS routes and military ATC provides ATS for IFR flights inbound to Sion from VALOR until handoff to Sion approach control. Contact was made with the military control centre by Geneva to appraise them of the Citation traffic and stated that the aircraft should leave VALOR on heading 080 at FL190. The ACC controller planned to have the Citation descend quickly so that it could continue its flight VFR and enter the Swiss Class E airspace located below the Class C airspace and so he cleared the Citation to descend to FL 180 advising that to continue visually, it would be necessary to descend below Class 'C' airspace which would mean "entering Swiss territory below FL 130 to which the response was that a descent to either FL 130 or FL 120 could be made".

The Piaggio was then cleared by Sion to take off and climb to FL 180, making a call when passing 13,000 feet Altimeter Pressure Settings and the Citation was cleared only to FL170 because of traffic passing below. The military control centre was advised that the Citation would cancel IFR in descent without entering military-managed airspace. The Sion controller was advised of this plan and, in reply to his request for a position on the Citation, was advised that it was "north of Mont Blanc, 20....15 nautical from Mont Blanc". The Citation was then re-cleared to continue descent to FL 150, which was the minimum IFR flight. Having confirmed that flight conditions where the aircraft was were "excellent", the controller asked the pilot to call him back when he was ready to cancel IFR and advised him of the IFR departure from Sion and also asked the pilot to increase his rate of descent. In response the Citation increased from 1400 fpm to 2400 fpm. The controller was due to handover his position and although he advised his relief that he intended to complete the crossing of the Citation and the Piaggio before he left the position, the change actually took place before the crossing had occurred.

Almost immediately, the Piaggio appeared on the ACC radar screen climbing through FL 088. The Citation was descending through FL 170 and was 20 nm to the north west of the former. As the Citation was reaching FL 150, the new controller gave the relative position of the Piaggio - "at your eleven o'clock, twelve nautical climbing to level one hundred and twenty" to which the pilot responded that it was not yet in sight and offered to descend lower. Having confirmed that he was ready to cancel IFR, that was done and the Citation was cleared to "descend at your discretion". The Citation crossed the Franco-Swiss border at FL 149 as the Piaggio was climbing through FL 133 at a range of 7.4nm. Sion was advised by the ACC controller that the two aircraft would cross with the necessary vertical separation, but when Sion noticed the Citation on their radar display, traffic information was immediately given to the Piaggio.

At this time, the ACC Short Term Conflict Alert (STCA) was triggered visually with the Citation descending through FL 149 and the Piaggio was climbing through FL 134 with 6.9 nm between them. Nine seconds later, the ACC controller, who had requested that the VFR Citation remain on his frequency, gave updated traffic information to the Citation, advising that the Piaggio was climbing through FL140 at a range of 6 nm, to which he received the reply that the Citation was descending through the same level. Fifteen seconds later, the two aircraft were 100 feet and 4.2nm apart and after a further ten seconds, 650 feet apart at 2.8nm, with the Citation passing FL139. Sion did not have STCA.

Neither pilot had visual contact with the other's aircraft at any time. It was determined that the Closest Point of Approach (CPA) had been 2.8nm laterally and 650 feet vertically 3nm north east of waypoint VALOR in the vicinity of FL140.

The STCA logic in the case of opposing climbing/descending traffic was considered. It was found that in the airspace involved, the system is set to generate an alert if a convergence is predicted to occur at distances less than 4.9 nm laterally or less than 750 feet vertically subject to an alert not occurring more than 60 seconds ahead of the predicted loss of prescribed separation. If two aircraft are changing levels as they converge towards the same level, as in this case, the system assumes they will both acquire this level on reaching it and an alert is generated when they are less than or equal to 1900 ft vertically from the same level and there is a concurrent risk of losing lateral separation.

The observations of the Investigation included the following:

The Investigation determined that the Cause of the Serious Incident was "the hazardous convergence of two aircraft flying in opposite directions, one on approach under visual flight rules, the other departing under instrument flight rules, following non-compliance with an instruction given by air traffic control to the pilot on approach".

A Contributory Factor was also identified:

Safety Action taken as a result of the occurrence was noted to have included:

The Final Report was completed on 23 March 2015, approved by the recently-instituted Swiss Transportation Safety Investigation Board (STSB) on 31 March 2015 and subsequently published by them. ICAO AIRPROX Category 'B' was assigned.