On 26 May 1993, a Cessna Citation II being operated by a UK Air Taxi Company on a positioning flight from Oxford to Southampton to collect passengers with just the flight crew on board overran the very wet landing runway at the destination in normal daylight visibility and ended up on an adjacent motorway where it collided with traffic, caught fire and was destroyed. The aircraft occupants and three people in cars received minor injuries.

On 26 May 1993, a Cessna Citation II being operated by a UK Air Taxi Company on a positioning flight from Oxford to Southampton to collect passengers with just the flight crew on board overran the ‘very wet’ landing runway at the destination in normal daylight visibility and ended up on an adjacent motorway where it collided with traffic, caught fire and was destroyed. The aircraft occupants and three people in cars received minor injuries.

An Investigation was carried out by the UK AAIB. It was noted that the presence of a second pilot was only required because the aircraft was being operated for the purposes of public transport and that the second pilot was not require to be type rated. It was also noted that this particular positioning flight occurred every week and there was agreement with the destination airport ATC that the flight could operate outside of normal operating hours at the airport but that fire cover would not be available.

It was established that the landing had taken place with the crew aware that the prevailing tailwind component was in excess of the maximum limit given in both the Aircraft Flight Manual (AFM) and the Company Operations Manual. ATC had also reminded the crew of both the indicated tailwind component and the fact that the runway direction the crew proposed to land on (which was the opposite direction to that expected and offered by ATC) was (still) “very wet”. The crew had been advised earlier of the presence of a thunderstorm over / in the vicinity of the airfield and of associated heavy rain and a “very wet” runway.

Touchdown, with the aircraft commander as PF was estimated to have occurred on the 1723 metre long Runway 20 at about 300 metres from the threshold and at the planned speed. Although the co pilot had not queried the excessive tailwind component for the landing, when it became apparent that deceleration was not taking place normally on the wet runway, the co pilot did call a go around. However, the aircraft commander considered that rejecting the landing at this stage would have been unsafe, a decision which the investigation concluded had been correct.

The aircraft left the side of the runway near the end as the commander attempted to increase the available stopping distance and eventually slid down an embankment onto the motorway below and hit two cars. The aircraft and one of the cars caught fire. It was noted that the airport RFFS, although only in the process of preparing to come on operational watch at the official airport opening time, had been notified by ATC of the imminent arrival of the aircraft and the supervisor had agreed to position two appliances near the runway on standby. ATC activated the crash alarm and the two appliances followed the aircraft to the accident scene and quickly contained the fires. The Investigation noted that the performance of the RFFS “was a major factor in minimising the hazards to the flight crew and the public”. 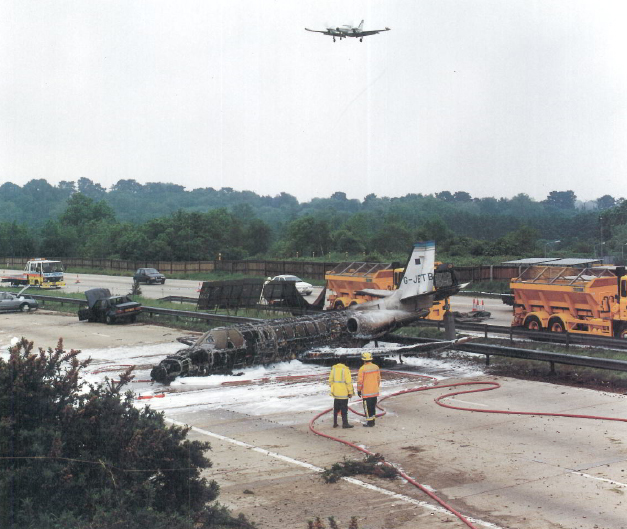 The Investigation considered that runway hard surface friction characteristics were of a good standard but that available evidence, whilst not precise, indicated that there had been considerable standing water on the runway at the time of the landing. It also considered that ”the commander should not have attempted a landing on Runway 20 in the reported wind conditions, or even with the wind he had computed, and the co-pilot should have warned him that he was landing outside limits” and noted that “the proximity of the motorway to the end of the runway contributed to the severity of the accident.

The Final Report of the Investigation was published on 9 June 1994 and may be seen in full at SKYbrary bookshelf: Aircaft Accident Report 5/94

Three Safety Recommendations were made as a result of this Investigation: 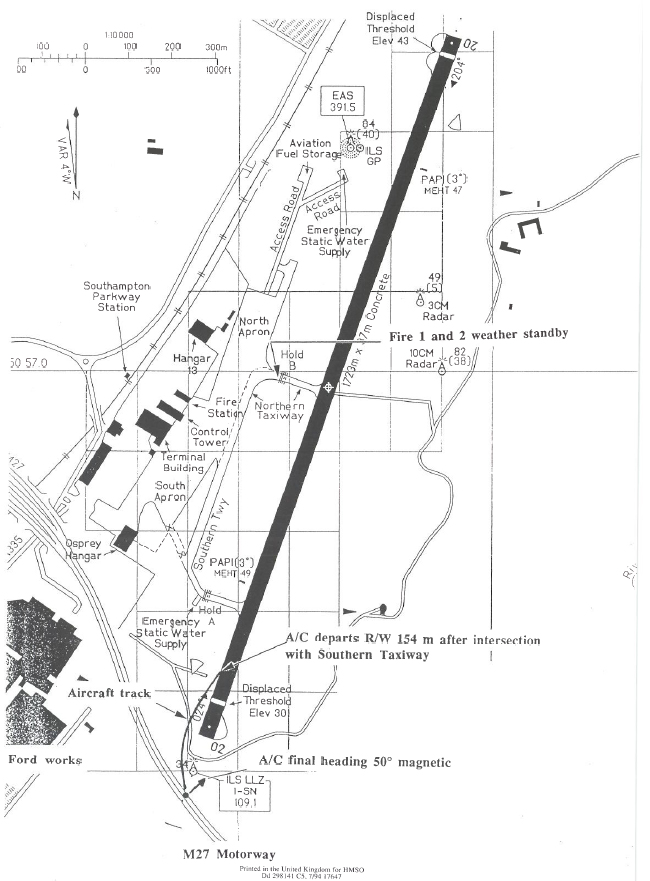 Diagram of the runway excursion at Southampton Airport