On 14 July 2011, the crew of a Cessna Citation intentionally continued a night ILS approach at Port Harcourt below the applicable DA without having any visual reference with the runway and a crash landing and lateral runway excursion which severely damaged the aircraft followed. The Investigation did not establish any reason for the violation of minima but noted the complications which had arisen in respect of CRM because of two-Captain flight crew. Absence of two-way radio communications between the fire trucks and both ATC and the AFS Watch Room was noted to have delayed discovery of the crashed aircraft.

On 14 July 2011, a Cessna Citation 560XLS (5N-BMM) being operated by Bristow Helicopters Nigeria on a company passenger flight from Lagos to Port Harcourt left the side of the landing runway shortly after a high impact night touchdown in reportedly normal ground visibility. The aircraft hit the ground hard and shortly afterwards made a rapid turn through 90˚ before stopping. It sustained substantial damage and two of the four passengers received minor injuries. The crew did not communicate with ATC after the crash and even after the AFS had been alerted, it took some time to locate the aircraft and render assistance to the occupants who had all walked clear of the aircraft. The AFS found that the crew had left the right hand engine running when they evacuated the aircraft and used their high pressure water hoses to shut it down. 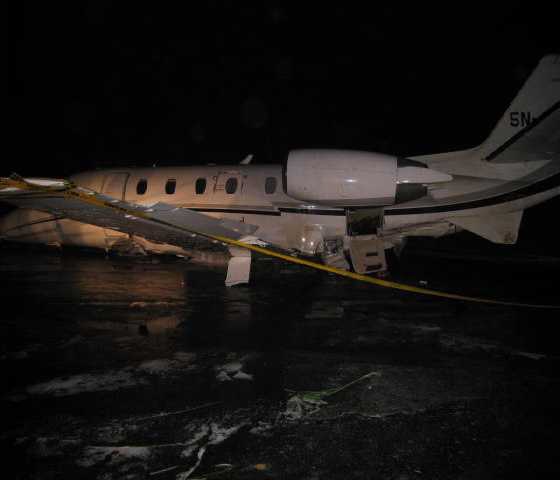 An Investigation was carried out by the Nigerian Accident Investigation Bureau (AIB). Data were recovered from the CVR and FDR which were both undamaged and were successfully downloaded by the National Transportation Safety Board (USA) (NTSB). The FDR data were readable but the CVR data were variously classified as 'unusable' or 'poor' by NTSB, these being the two lowest points on a five point CVR Quality Rating Scale used by the Board.

It was noted that at the time of the accident, fixed wing operations were new to Bristow Helicopters Nigeria. Both pilots had accumulated well in excess of 10,000 hours total flying experience but both had less than 700 hours on the accident aircraft type. Both the 56 year-old aircraft commander who was PF for the accident flight (and also the Chief Pilot and a Training Captain) and the 60 year-old Co-Pilot held the rank of Captain but the Co-Pilot, although he held the rank of Captain on two other aircraft types at the Operator was only "certified" as a Co-Pilot on the accident aircraft.

It was noted that there was no Cabin Attendant on board the accident flight which was in compliance with Bristow policy of carrying at least one cabin attendant only when there are nineteen or more passengers.

It was established that a straight-in ILS approach to runway 21 was flown. The aircraft was cleared to land at 3nm range whilst still in Instrument Meteorological Conditions (IMC) on the Instrument Landing System (ILS). There was no crew response to the auto callout of 'minimums' at DA and after various subsequent remarks from the PF to the effect that the aircraft was not on the centreline and "couldn't see down", the PM was recorded as saying "I am telling you to go down" which received the response "I will go down". Five seconds later, the aircraft crashed with a 2.43g vertical acceleration spike occurring on the recorded flight data. The aircraft was turned rapidly to face across the runway after an undercarriage leg became trapped in a culvert alongside the runway. 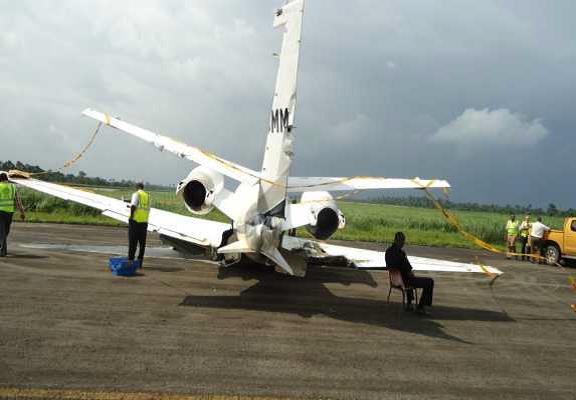 The aircraft wreckage (reproduced from the Official Report)

Analysis of FDR data showed that "the last few seconds before the crash, the aircraft was in an unstable approach situation and not aligned, this due to the magnetic heading values indicating a left directional change".

It was found that the flight crew had not used the emergency evacuation checklist or spoken to their passengers after the aircraft came to a stop. After they found that the main passenger exit door could not be opened due to fuselage impact damage, they and the passengers exited the aircraft via the right rear emergency exit which was in close proximity to the still-running right hand engine. It was noted that although all AOC holders are required to have a program to demonstrate the effectiveness of their crew members' emergency evacuation procedures, the Investigation could find no evidence of the existence of such a Program in respect of Bristow Helicopters' fixed wing operations in Nigeria.

The violation of the applicable DA for the approach was noted to have been in direct conflict with regulations as well as Company SOPs. It was concluded that, contrary to their statements, "the pilots had enough time to carry out a missed approach". They had also had enough time to find out what caused the blurred windshield they had commented on earlier in the approach (at 8nm range). There was no further recorded reference on the CVR to a blurred view through the windshield and the Investigation was not able to find any explanation for an absence of forward visual reference once clear of cloud. It was noted that Windshield Defog is achieved by the electrically powered windshield heat system which is supposed to be selected on prior to descent from altitude to provide adequate clearing for descent into high humidity conditions. The most recent Meteorological Terminal Air Report (METAR) timed 23 minutes prior to the accident gave a prevailing visibility of 6km in drizzle with air an temperature of 24ºC and a Dew Point Temperature of 22ºC.

The CRM issues raised by two pilots of Captain rank flying together were an area of focus for the Investigation. It was noted that "it was the Captain flying as Co-pilot that gave the command to the Captain flying the aircraft to go down, even when he complained that he could not see and that he was not aligned". It was considered that "a regular First Officer would not give a command like that to his Captain" and concluded that "in crew pairing, necessary consideration should be made to avoid personality clashes, ego and unnecessary supremacy based on cultural and age differences which might jeopardise aircraft operational safety".

It was noted as a matter of fact that neither pilot appeared to have received enough simulator training to satisfy the applicable regulatory requirements. It was also noted that the Operations Manual stated that "the normal retirement age for pilots shall be on their 58th birthday" but that discretion to continue beyond that age might be used. And although it was not linked causally to the accident circumstances, it was found that at the time of the accident, Bristow Helicopters' fixed wing operations had been being conducted for almost a year without a valid regulatory approval of Parts A and C of their Operations Manual.

The delay in AFS vehicles reaching the crash site due to the lack of adequate arrangements at the aerodrome for radio communications with AFS vehicles was noted not to have prejudiced the survival of the occupants of the crashed aircraft on this occasion.

The formally stated Cause of the Accident was "the decision of the pilot to continue the approach without the required visual references".