On 4 January 2002, a Bombardier Challenger 604 became very quickly uncontrollable as the crew attempted to rotate for lift off at Birmingham and within a few seconds it had crashed inverted near the airport passenger terminal killing all on board. A rigorous Investigation found that an uncontrollable roll had occurred after an aerodynamic stall attributable to frost on the wings which had been noticed but apparently not considered indicative of a need for de-icing. The exclusively FAA promoted notion of polished frost may have played a part in the pilots decision making and was considered to be dangerously misleading.

On 4 January 2002, a Bombardier Challenger 604 (N90AG) being operated by Epps Air Service on a non-scheduled passenger flight from Birmingham to Bangor ME was observed to roll rapidly to the left as it attempted to take off in day VMC and within a few seconds it had crashed inverted within the airport perimeter and been quickly destroyed by impact forces and a fire which resulted in the deaths of all 5 occupants. 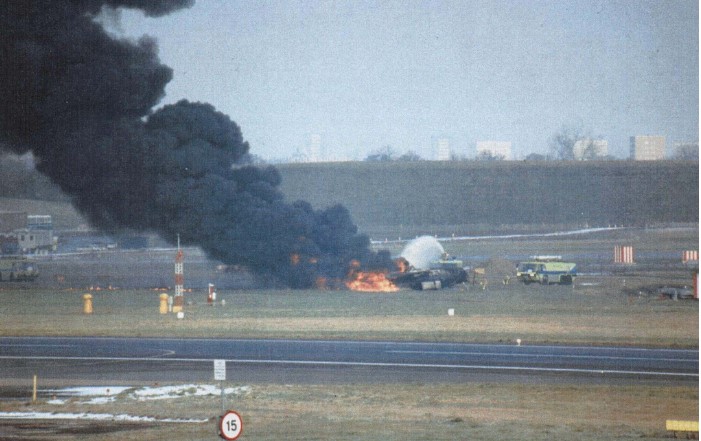 The crash site whilst the fire was still being extinguished. [Reproduced from the Official Report]

It was established that the previous day, the same two-Captain crew and aircraft had arrived at Birmingham at 2039 local time after a 7 hour 40 minute flight from West Palm Beach FL with two passengers after originally departing from Atlanta. Whilst the aircraft was parked remotely at Birmingham overnight, the air temperature, which had been -1°C on arrival, remained below zero throughout dropping to a minimum of -9°C, at which time the dew point had also been -9°C but there was no precipitation and the sky remained largely clear until the following morning. The two pilots and the observer spent the night at a local hotel, eating a meal and consuming alcohol before retiring at about 2315. The older of the two Captains made a long distance phone call shortly before 0200.

The rostered reporting time the next morning was 1000 after a 12½ hour rest period, which was within the applicable (FAA) regulatory limitations. The older Captain, who was to act as PF for the flight to Bangor ME for a planned refuelling stop, arrived together with the observer pilot at about 1040 and the APU was started at approximately 1050. The other Captain followed around 25 minutes later and although both pilots were observed to carry out an external inspection of the aircraft at different times, no request for de-icing was made. The Captain of a Bombardier CRJ aircraft who had inspected his aircraft from 1125 onwards, after it had just been towed to the main apron after being parked next to the accident aircraft overnight, reported having found 1-2 mm of soft hoar frost covering all its upper surfaces and he consequently “had no doubt that de-icing was required” and had called for it. It was noted that had de-icing service been requested for the Challenger, it was unlikely to have resulted in any delay to the departure. Refuelling of the aircraft to full tanks with 10,110 litres of fuel was completed at about 1140 and available evidence indicated that the temperature of the fuel in the wing tanks after this was likely to have been “around 0°C”. Shortly before departure, the OAT had risen to -2°C with a light surface wind and cloud cover had increased to SCT at 700 feet and BKN at 800 feet.

Finally the two passengers, the same ones who had been on board the inbound flight, arrived and with the engines started, taxi clearance was obtained at 1205. Speeds for the planned flap 20 takeoff were V1 137KIAS, VR 140KIAS and V2 147KIAS. It was briefed that anti-icing might need to be selected on immediately once airborne.

The takeoff from runway 15 appeared to have been normal until lift off. Rotation was commenced at 146 KCAS at an initial pitch rate of around 4°/second with lift off occurring 2 seconds later at about 153 KCAS. Once airborne, the elevator position was reduced from 8° to 3° as the pitch rate increased to about 5°/second and the aircraft immediately began to bank left at a rapidly increasing rate, reaching 50° within 2 seconds as the heading diverged 10° to the left of the runway centreline. FDR data showed that opposite aileron and right rudder inputs had been made immediately after the left bank began and both were fully applied within 1 second and maintained. When the bank angle reached 80°, the left wing tip made surface contact at a point 1,415 metres from the beginning of the runway from where the takeoff had been commenced. As the bank angle continued to increase, nose-up elevator input was progressively increased and 3½ seconds after takeoff, stick shaker activation was recorded. Recorded data ceased at impact 2 seconds later with the last recorded aircraft attitude being 111° left wing down and 13° nose down on a heading of 114°M. The aircraft was observed to impact the ground inverted and as the forward fuselage separated from rest of the aircraft, a major fuel fed fire started which in conjunction with impact forces led quickly to the almost complete destruction of the aircraft. The annotated illustration below shows a plan view of the aircraft ground track from the point where ground contact first occurred. 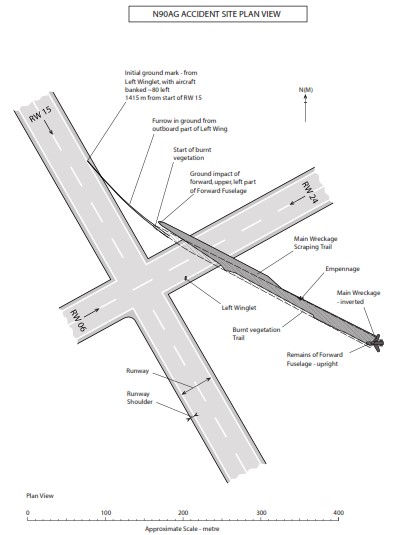 A plan view of the accident site. [Reproduced from the Official Report]

During an extremely thorough examination of the full range of possible causes of the uncontrolled roll which caused the accident, all possibilities except wing surface contamination by frozen deposits were eliminated. In particular the horizontal stabiliser and elevators were operating normally on takeoff when there was a substantial deficit in wing lift. This situation “could only have been the result of abnormal airflow over at least part of the wing and was fully consistent with the effects of surface roughness associated with frost contamination” with such contamination likely to have been present during takeoff. In general, it appeared that a stall for any reason in a Challenger would usually involve a rapid and severe wing-drop with corrective aileron inputs ineffective in controlling the roll rate of a stalled wing until it had first been un-stalled by reducing the angle of attack. The possibility that asymmetry in the extent of frost on the upper wing surfaces may have been created by the effect of the APU exhaust on the right wing, especially at the wing tip when the left wing was not similarly affected, was accepted but whilst this might have accentuated an abrupt wing-drop at the stall, it was found that a wing-drop could have occurred without this effect.

It was found that a relatively small amount of surface roughness on a Challenger wing was capable of sufficient interference with the normal airflow over it to cause it to stall at a significantly lower angle of attack than would apply to an uncontaminated wing. For this to happen, the surface roughness would have to be both dense and of a height that was significant relative to the thickness of the wing boundary layer with the degree of roughness rather than its thickness as the most important factor. It was likely that a roughness parameter (Rp) at the lower end of the range associated with the term ‘a small amount of ice’ as defined by the JAR/FAA’ would typically cause a reduction of around 5° in wing stall angle and 30% in the maximum lift coefficient - this roughness level being similar to that of medium-fine emery paper. It was considered that although the magnitude of this effect appeared to be well known to aerodynamic specialists this did not seem to be the case in the aviation industry generally.

Guidance to pilots on when this aircraft type needed ground de-icing to ensure a safe takeoff was found to be somewhat contradictory. Whilst Bombardier documentation was unequivocal about the importance of never attempting a takeoff with any frost at all on the wings or tail surfaces and made no reference to the term “polished frost”, generic guidance in FAR Parts 91, 135 and 125 which was also reflected in the Epps Air Service company OM was found to support takeoff with frost contamination provided that the frost had first been “polished smooth”. An attempt was made to “determine the definition of ‘Polished Frost’ and indeed how to polish frost (but) nothing was found” and it was concluded that the explanation may have been “lost in aviation history”. Although it was recognised that there were a range of possible reasons why the crew did not seek de-icing despite the presence of frost on the wing leading edge, it was considered that the uniquely FAA concept of “Polished Frost” may have been a factor. It was considered by the Investigation that the concept “is particularly inappropriate and potentially dangerous to modern aircraft types and detracts from the importance of strictly observing the clean wing principle”.

The Performance of the Flight Crew

The performance and judgement of what was unquestionably an experienced crew - the commander was also the company Director of Flight Operations - was considered to indicate that they were not being as thorough as might have been expected despite both of them being widely recognised as “highly experienced and conscientious”. Whilst the PF had “displayed a high level of motor skills during his reaction to the uncontrolled roll”, it was considered that both pilots had shown “some deficiencies in judgement and concentration” between their arrival at the aircraft and the commencement of the takeoff roll. It was considered of particular note that the accident aircraft was the only one of those which had been parked at Birmingham overnight and then departed the next day without having been de-iced before taxiing for takeoff.

It was also found from post mortem examinations that both pilots had taken a sedative anti-histamine known to be used as an aid to sleep and available over the counter which included diphenhydramine. The aviation pathologist who made this finding noted that given that it was known that both pilots had disturbed and/or inadequate sleep for the two nights preceding the accident and had completed an eastbound flight the previous day, it was possible that they were suffering from “jet lag”. With evidence indicating that both had also consumed some alcohol the previous evening, he concluded that a combination of tiredness, jet-lag and the use of medication which included diphenhydramine had combined to impair the performance of the pilots.

It was noted that the fact that the side effects of diphenhydramine include impairment of short term memory and attention was widely known but that despite this, there appeared to be considerable evidence that inappropriate use of over-the-counter medication by pilots was an ongoing issue in the USA. Studies had shown that significant numbers of pilots killed in flying accidents there had subsequently been found to have recently taken non-prescription medications including those used to aid sleep containing diphenhydramine. It was noted that in the UK, all such products carry warnings that they may cause drowsiness that if they are affected users should not drive or operate machinery and the statement “avoid alcoholic drink”. However, similar warnings were not found on equivalent products in the USA. It was considered that the findings of this Investigation were supportive of Safety Recommendations made by the NTSB in 2000 (see here and here) which were “internationally applicable”.

The formally-documented Findings of the Investigation included, but were by no means limited to, some generic points relating to frost on the wings of this aircraft type and points of wider concern about the use of sleep-aiding drugs by pilots as follows:

A total of seven Safety Recommendations were made at the conclusion of the Investigation as follows: