On 11 March 2018 an Unreliable Speed Alert occurred on a Bombardier Challenger, the Captain’s airspeed increasing whilst the First Officer’s decreased. The First Officer attempted to commence the corresponding drill but the Captain’s interruptions prevented this and a (false) overspeed warning followed. The Captain’s response to both alerts was to reduce thrust which led to a Stall Warning followed, after no response, by stick pusher activation which was repeatedly opposed by the Captain despite calls to stop from the First Officer. The stalled condition continued for almost five minutes until a 30,000 feet descent was terminated by terrain impact.

On 11 March 2018 a Bombardier 604 Challenger (TC-TRB) being operated by MC Aviation on a private passenger flight from Sharjah to Istanbul Ataturk experienced an indicated airspeed discrepancy whilst adjusting the cruise level from FL360 to FL 380 in day IMC following which control was lost as a series of stall warnings was followed by the flameout of both engines. Recovery was not attempted and impact with mountainous terrain followed soon afterwards. The aircraft was destroyed by impact forces and a post crash fire and the three crew and eight passengers on board were killed.

An Investigation was carried out by the Aircraft Accident Investigation Board (AAIB) of the Iran Civil Aviation Organisation (CAO). The FDR and hour CVR were eventually located and recovered from the accident site and their data successfully downloaded. No crew speech was recorded on the dedicated channels (considered to be due to no use of headsets) so the area microphone data were filtered to obtain a record of communications between the two pilots.

It was established that prior to departure from Sharjah, the aircraft had been parked there in the open for three days during which time “dusty weather conditions” were reported to have prevailed at the airport. The Investigation was informed that on arrival, the flight crew had not fitted the pitot covers before leaving but that “this had been done later”.

After an uneventful departure from runway 30 at Sharjah, the flight entered the Tehran FIR in IMC about 9 minutes after takeoff in the climb to FL230 with the Captain’s AP engaged. Once radar identified, the flight was cleared to continue climbing to cruise at FL 360 in accordance with its filed FPL and this level was reached about 15 minutes later. 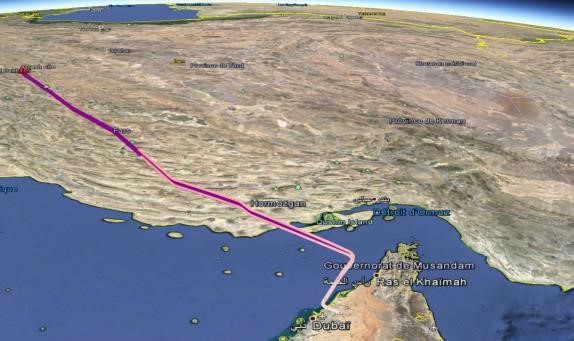 The route of the flight. [Reproduced from the Official Report]

About an hour after entering Iranian airspace, the flight was passed to a new ACC sector and almost immediately after it had been radar identified by the new sector, FDR data showed that the left and right IAS indications had begun to diverge, initially only by about 5 knots. As this happened, the flight requested a climb to FL 380 and once approved this was initiated in VS mode. Soon after beginning the climb, an automated EICAS caution of unreliable airspeed (EIS COMP MON) drew the attention of the pilots to what had become a 10 knot IAS difference - the left IAS had initially remained steady and then started to increase whilst the right IAS had slowly decreased. The corresponding Non Normal Checklist for ‘Unreliable Airspeed’, which begins with a requirement to check all three IAS indications and if one is different to the other two, select its ADC source to one used by one of the two correct displays, was - despite three attempts by the First Officer - not run because of interruptions from the Captain.

Approximately a minute later, as the aircraft was approaching FL380, an overspeed aural warning based on the (false) detection of Mach exceeding M0.85 began to sound. Despite the First Officer recorded as saying “my speed is decreasing”, the Captain responded by reducing engine thrust to idle and the warning was not muted. A further call by the First Officer of “captain, lower the nose, you are not lowering the nose”. As a descent began, the Captain disconnected the AP and instructed the First Officer to get ATC clearance for a descent to FL 370 due to an unspecified “malfunction”.

One minute after annunciation of the first Overspeed Warning, the Stall Protection System was activated and there followed a continuing sequence of stall warnings and repeated stick pusher activations with the Captain opposing the latter with contrary rearward movement of the control column. There was no attempt to follow the stall recovery procedure and the aircraft eventually entered “a series of pitch and roll oscillations”. As the Stall Warnings continued, the First Officer called out “leave it, why are you holding the nose” but FDR data showed that during over 6000 feet of descent in approximately three minutes, the aircraft experienced about 50 rapid pitch cycles in which each activation of the stall protection system was followed by the Captain actively opposing the stick pusher system. Loss of altitude was accompanied by an uncommanded decrease in both engines’ thrust until both engines flamed out at around FL 310. This flameout was considered likely to have been a consequence of disturbed intake airflow caused by the rapid and repeated pitch oscillations eventually causing internal damage to the engines. Loss of engine thrust resulted in the termination of FDR data recording and at about the same time, a declaration of emergency to ATC, the last transmission made, was recorded on the CVR. Recorded CVR data then continued for 45 seconds during which a single TAWS ‘BANK ANGLE’ Alert occurred.

Impact with mountainous terrain nose first at an elevation of approximately 7,500 feet amsl was estimated to have occurred approximately two minutes after the single ‘emergency’ transmission. Subsequent site examination concluded that prior to impact, the aircraft structure had been undamaged. The crash site was identified to the emergency services by local people who could see smoke and fire.

ATC had observed from their radar that the aircraft was descending below the requested FL340 but the controller received no clear reply and could get no further response from the aircraft. Another (Turkish) aircraft in the vicinity was requested to attempt contact but was also unsuccessful and the Captain advised ATC that the last time he saw the Challenger on his TCAS display, it had been 6000 feet below his flight level (FL360) and “rapidly losing its altitude”. The elapsed time from the accident aircraft’s first EICAS indication of a 10 knot IAS discrepancy to impact was approximately 8 minutes.

It was not possible to determine the cause of the unreliable speed indication but it was noted that both dust ingested by the pitot system during a period parked prior to flight without the pitot covers fitted or pitot system ice contamination as the aircraft transited an unstable convective air mass with very significant vertical development may have been involved. No fault was found with the content of the two non-normal QRH drills relevant to the accident and neither was there any evidence of relevant pre-existing airworthiness deficiency.

The Cause of the accident was formally determined as "insufficient operational prerequisites for the management of erratic airspeed indication failure by the flight crew”.

The Final Report of the Investigation was issued on 10 October 2020.