On 10 July 2014, Bombardier CRJ-200 instructed to go around at Port Elizabeth by ATC came into close proximity with an A320 which had just taken off from the same runway and initiated avoiding action to increase separation. The Investigation concluded that the TWR controller had failed to effectively monitor the progress of the aircraft on final approach before issuing a take off clearance to the A320.

On 10 July 2014, a Bombardier CRJ-200 (ZS-NMF) being operated by SA Express on a scheduled domestic passenger flight from Durban to Port Elizabeth as EXY336 was making a day Visual Meteorological Conditions (VMC) missed approach from runway 26 when it had to take avoiding action against an Airbus A320 (ZS-SZZ). The other aircraft was being operated by South African Airways on a scheduled domestic passenger flight from Port Elizabeth to Johannesburg as SAA 410 and had just taken off from the same runway.

An Investigation was carried out by the South African CAA Accident and Investigation Division (AAID). Flight Data Recorder (FDR) data from the CRJ 200 was successfully downloaded but only CAS data was relevant - it showed that the aircraft had been flown at between 130 and 135 KCAS on final approach. The CRJ 200 Cockpit Voice Recorder (CVR) data was not obtained before it was overwritten. FDR data was officially requested from the A320 operator but was not provided. Runway 26 was in use in CAVOK conditions and the surface wind was reported as 040º at 5 knots making a slight tailwind component on finals a possibility.

It was established that at the time the conflict arose, the TWR controller was "instructing a student" and had four aircraft under his control; the two involved in the incident, another arrival and a calibration aircraft which was in the hold to the north of the aerodrome. Due to the calibration task, the Instrument Landing System (ILS) was not available and inbound aircraft had to fly visual approaches. The CRJ200, with the First Officer acting as PF, had been cleared to make a visual approach to runway 26 from the 10 mile centre fix. The A320 was asked if an immediate take off would be possible and on confirmation of this was given take off clearance.

The A320 commenced its take off roll with the CRJ 200 at about 2 nm from the threshold. The latter was told by TWR to "continue with the approach, landing assured". However, half a minute later and with about one mile to run, TWR instructed the aircraft to go-around and report left hand downwind and followed this half a minute later with an instruction to commence an early left turn "when safe and able". The CRJ 200 crew acknowledged the instruction but failed to advise that they did not intend to follow the directional element of it. They subsequently stated that the TWR go around instruction had been received a few seconds after they had made their own decision to go around and turn right. A go around had been promptly initiated, and soon after the supplementary early left turn request, TWR had provided traffic information on a Cessna Citation calibration aircraft holding to the south of the aerodrome.

At this point, the A320 was climbing ahead through 1300 feet and the CRJ 200 was observed on radar to be half a mile behind the A320 and maintaining 1800 feet. Twenty seconds later, the CRJ 200 was observed on radar turning the to the right as the A320 climbed through that level. The A320 checked in with APP and was instructed to turn left because the CRJ 200 had been observed to be turning right and was therefore re-cleared to continue doing so. Prescribed separation as detailed in ICAO Doc 4444 PANS-ATM was restored soon afterwards and the CRJ 200 completed an uneventful visual circuit onto a further approach followed by a landing.

According to radar data, the vertical separation between the two aircraft was 263 feet when the horizontal separation was 0.2 nm. Both aircraft were stated to have received Airborne Collision Avoidance System (ACAS) RA alerts as separation reduced but the CRJ 200 did not report this ATC. When they received their RA, the CRJ crew reported that they had been maintaining positive visual contact with the A320 ahead and, since it was estimated to be between 5º and 10º to the left and slightly below, had already commenced a turn to the right. The TCAS RA to descend was therefore ignored. The A320 reported their RA to APP but it was not clear what it was or whether, if it was a reactive RA whether it had been followed. The APP controller's response to the A320's RA call was an instruction to turn left onto 230º and continue to climb as cleared. Shortly after this, it was stated that the A320 had reported "clear of traffic" but it was not clear if this referred to the TCAS RA "Clear of Conflict" callout or to a visual assessment. 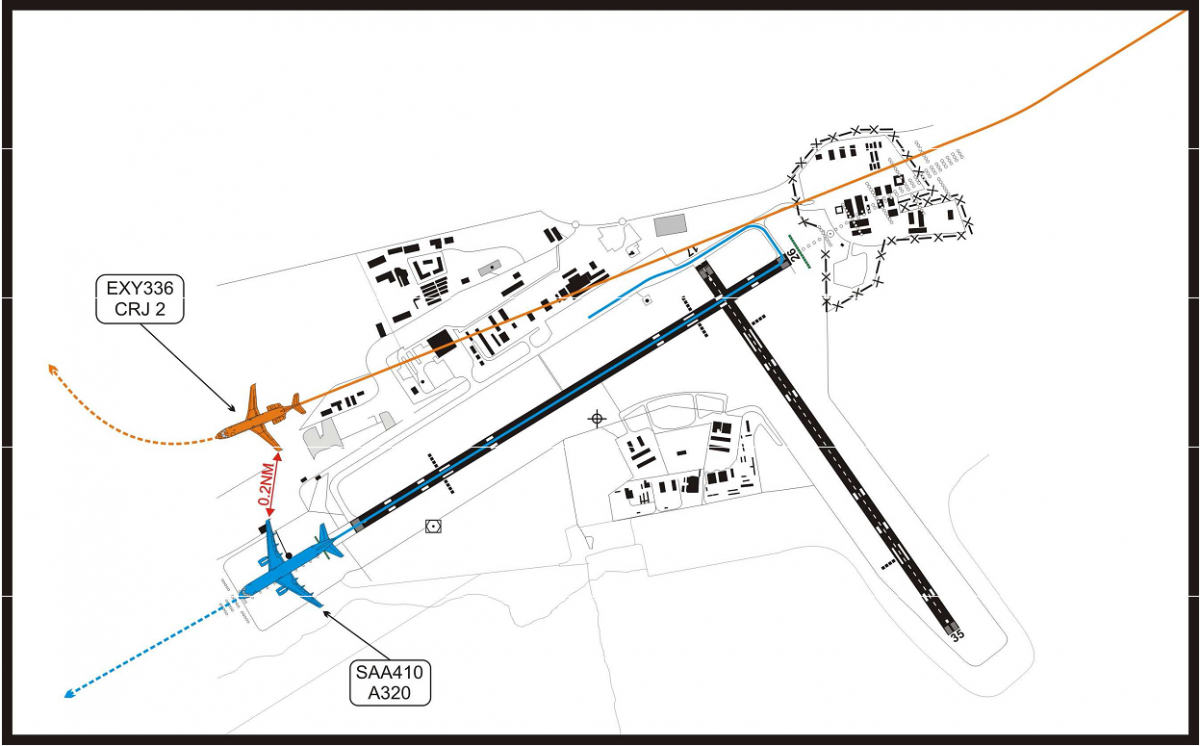 A plan view of the tracks of the conflicting aircraft when closest. Reproduced from the Official Report. 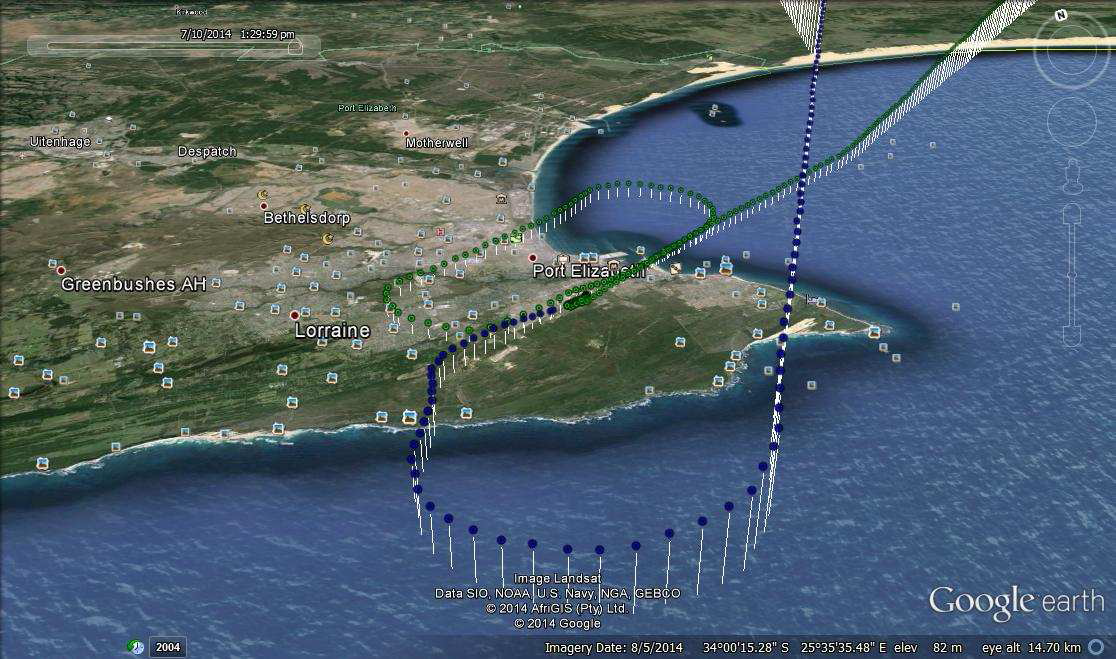 The recorded radar tracks flown by EXY336 (in green) and SAA410 (in blue). Reproduced from the Official Report.

Despite the CRJ crew's unacknowledged non-compliance with the detail in the ATC go around instructions, it was concluded that their subsequent visual avoiding action had prevented a possible collision.

It was noted that the A320 crew had not (apparently) perceived that there may be insufficient separation from the aircraft on approach before lining up but it was found that the First Officer had been PF under a new procedure introduced 10 days earlier which, for the first time at the Operator concerned, allowed First Officers to taxi the aircraft.

In respect of the TWR controller's judgement, it was noted that whilst "estimating the distance to an aircraft on the approach by looking at it poses a challenge, and the available radar display does provide such information" when an aircraft is on short finals, "the controller does not (tend to) look at the radar display". It was found that the conflict had occurred soon after he had commenced duty and that he was "well rested".

The formal determination of Probable Cause was that "the controller did not effectively monitor the flight progress of the aircraft on final approach, which resulted in a loss in separation, resulting in evasive action being taken by the crew of EXY336".

Three Safety Recommendations were issued, all in respect of ATC procedures but the first two not directed to a specific recipient, as follows:

The Final Report was published by the CAA AIID during the first half of 2015.