On 9 August 2019, a Bombardier CRJ-200LR about to depart Toronto which had read back and actioned a clearance to line up on the departure runway then began its takeoff without clearance and only commenced a high speed rejected takeoff when a Boeing 777-300 came into view crossing the runway ahead. A high speed rejected takeoff was completed from a maximum speed of around 100 knots. The Investigation concluded that an increased crew workload, an expectation that a takeoff clearance would be received without delay and misinterpretation of the line up instructions led to the premature initiation of a takeoff.

On 9 August 2019, a Bombardier CRJ-200LR, (C-GKEJ) being operated by Air Georgian on a scheduled international passenger flight from Toronto to Ohio as CGN7339 commenced takeoff on runway 33R as a Boeing 777-300 (C-FIUR) being operated by Air Canada on a scheduled international passenger flight from Copenhagen to Toronto as ACA883 was crossing the runway at an intermediate intersection after landing in normal day visibility. On seeing the 777 ahead, the CRJ carried out a high speed rejected takeoff and were able to clear the runway well before reaching the intersection at which the 777 was crossing.

An Investigation was carried out by the Canadian Transportation Safety Board. It was not able to use relevant data from either the CVR or DFDR of the CRJ200 because the subsequently flown 1 hour flight resulted in the overwriting of the event on 30 minute CVR and the operator failed to secure the DFDR as required under applicable regulations. The Investigation was therefore reliant primarily on recorded ATC data.

The CRJ200 taxied for departure from runway 33R on taxiway D (see the illustration below) as the Boeing 777 was landing on runway 33L On clearing the runway, the 777 was instructed to taxi via taxiways F4 and H and contact GND North where the controller instructed the flight to hold short of Runway 33R. A DHC-8 was then cleared for takeoff from the intersection of runway 33R and taxiway B3 and after it had done so, as the 777 was approaching its clearance limit, the GND North controller, having coordinated with the TWR runway controller, instructed the 777 to cross runway 33R “without delay”, aware that the next departure from the runway would be the CRJ200 which was cleared by TWR to line up and given an amendment to the previously issued departure clearance which was read back correctly.

Having noted this correct readback the TWR controller, who was also responsible for arrivals on runway 33L, turned their attention to approaching traffic for that runway. As the CRJ200 lined up, the First Officer finished the line-up checklist and the Captain asked them if they had received a takeoff clearance to which they received the response that they had. As the 777 crossed the holding point for its cleared crossing of the runway, the CRJ200 began its takeoff roll without receiving a corresponding clearance. 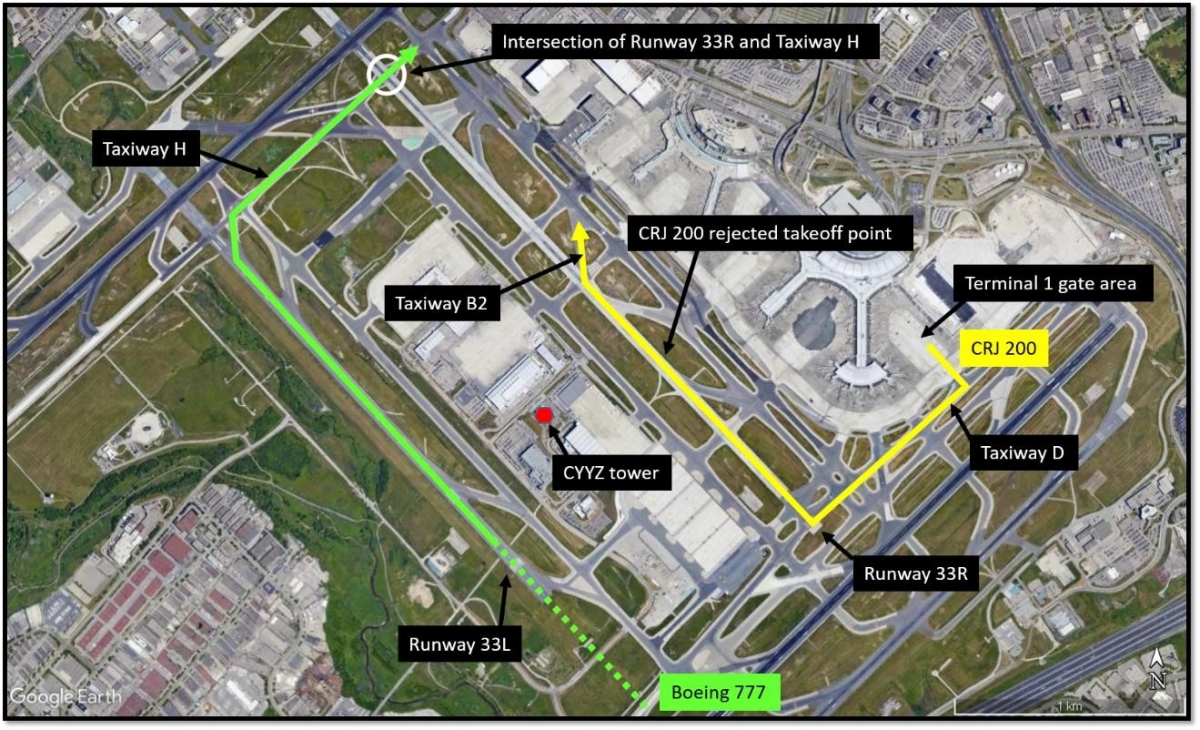 The ground track of the CRJ200 (yellow) and the Boeing 777 (green). [Reproduced from the Official Report]

Runway 33R does not have a level profile so the 777 was not initially seen but as the aircraft approached the peak of an elevated section of the runway, it came into view ahead on the runway approximately 1650 metres ahead and a rejected takeoff was immediately commenced with the crew realising that they had probably not received a takeoff clearance. A Runway Incursion Monitoring and Collision Avoidance System (RIMCAS) audible and visible alert was generated in the TWR at about the same time and caused the controller to return his attention to runway 33R. Upon doing so, he reported having “quickly assessed the situation, determined that there was no actual risk of collision and immediately issued a takeoff clearance to the CRJ 200”. The CRJ200 responded by advising that they had already initiated a rejected takeoff and were given an exit taxiway. Radar data showed that the CRJ200 had reached a maximum groundspeed of 99 knots. The flight was subsequently repositioned for takeoff and this was completed without further event. The 777 crew remained unaware of the event as in accordance with Canadian procedures, they had remained on the GND frequency whilst crossing the runway.

The “line up” clearance used by the controller was contrary to the applicable Manual of Air Traffic Services (MATS) phraseology which was required if any delay (not defined) to departure is anticipated. However, the controller reported assuming that the CRJ200 crew would have recognised the need for a short delay to their departure because of the much slower (DHC8) aircraft ahead and had therefore chosen not to inform them of a delay or issue a specific instruction to “wait” after issuing the line-up instruction.

In respect of the controller’s tactical assessment that continuing the takeoff would not have been hazardous since he could see that the 777 was about to complete its crossing near to the far end of the runway, this was in line with the MATS guidance which stated that “aborting a takeoff is an emergency procedure used when continuing would present a grave hazard to the aircraft” and that “a controller-initiated aborted takeoff is an extreme measure (to be) used only where no clear alternative exists”. However, the MATS guidance in the event of Stage 2 RIMCAS Alert in the circumstances which had prevailed was noted as requiring the issue of an abort takeoff instruction.

In terms of the sighting of the 777 ahead by the CRJ200 crew, the Investigation considered the geometry of the impeded visibility along the runway caused by its longitudinal profile which reached a maximum elevation at just over one third of the runway 33R length. It was calculated that at the start of the takeoff roll, the top 7.4 metres of the 777’s vertical stabiliser would have been visible approximately 2700 metres ahead. By the time the aircraft approached the crest of the hump, the entire fuselage of the 777 would have been visible crossing the runway approximately 1950 metres ahead.

It was considered that whilst there was no direct evidence that fatigue had played a part in the performance of the flight crew on the day in question, the Investigation found that in general, both pilots appeared to have a degree of difficulty coping with a sequence of rostered duties which usually started with late duties and then transitioned to early ones.

There were five Findings as to Causes and Contributory Factors:

There were three Findings as to Risk:

There was also one ‘Other’ Finding:

Safety Action taken as result of the investigated event was noted to have included the following:

The Final Report of the Investigation was authorised for release on 16 December 2020 and it was officially released on 15 January 2021. No Safety Recommendations were made.