On 30 July 2011, an Air Nostrum CRJ200 continued a significantly unstable visual approach to Barcelona in the vicinity of a convective storm to a point where the aircraft commander considered that a go around would be less safe than continuing the approach. In an attempt to regain a viable vertical profile from above, sustained and very high rates of descent were flown triggering a continuous 16 seconds of EGPWS Mode 1 PULL UP Warnings which were completely ignored. The resultant very hard landing caused structural damage to the aircraft and the sole cabin crew sustained a minor injury.

On 16 July 2012, a Bombardier CRJ200 being operated by Air Nostrum on a scheduled passenger flight from Badajoz to Barcelona with the First Officer designated as PF for the sector accepted a visual approach at destination after the offer of this by ATC due to adverse weather affecting the instrument approach procedure. The visual approach subsequently became unstabilised but was continued with a high rate of descent to a landing which was sufficiently hard to be likely to have caused structural damage to the aircraft. However, the aircraft was taxied to the allocated parking stand for passenger disembarkation before any check for aircraft damage. There, it was found that the sole member of cabin crew had sustained a minor injury although all other occupants were uninjured.

An Investigation was carried out by the Spanish CIAIAC. The event was not reported until six days after it had occurred and, as a consequence, the relevant Cockpit Voice Recorder (CVR) data was overwritten. DFDR data was successfully downloaded and read and formed the basis of a reconstruction of the approach as flown.

It was established that as the flight reached the Barcelona area, a significant area of convective storm activity was to the north of the airport and moving slowly south with the likelihood that the final approach to landing runway 25R would be affected before the storm area reached the airport itself. ATC were aware from pilot reports of the progressive southward movement of the adverse weather and had already routed the aircraft to the south of the airport in preference to the usual arrival route from the north for this reason. Recognising the desirability of keeping the aircraft clear of where they believed the worst of the weather was, radar vectors were initially provided towards a 4nm Instrument Landing System (ILS) intercept. However, ATC then suggested that if the crew were able to accept a visual approach then it would be approved. This offer was accepted and the aircraft was turned left towards a shorter intercept with the extended centreline which resulted in the aircraft being slightly above the ideal vertical profile. Speed was reduced with use of the airbrakes and the aircraft was fully configured for landing before reaching 5nm from the threshold. The AP was then disconnected but soon afterwards, at an altitude of 1390 feet, about 3.5nm from the threshold and still some distance from the extended runway centreline (see the diagram below), low cloud was encountered. It was decided to remain clear of cloud by climbing to 1700 feet whilst continuing to turn towards final approach. Having lost sight of the runway, the crew reverted to the display of the ILS LOC for guidance but ATC were not advised of these developments. Having turned 20° to the left to reach a heading of 299°, descent was resumed and, at 2.8nm range, visual contact with the runway was regained. However, by now the aircraft was over 600 feet above a normal vertical approach profile (see the second diagram below) and the crew were aware that the aircraft was unstabilised. They stated to the Investigation that at this point “they considered the possibility of going around to the left or right but ruled out both options due to the presence of other aircraft and obstacles respectively”. 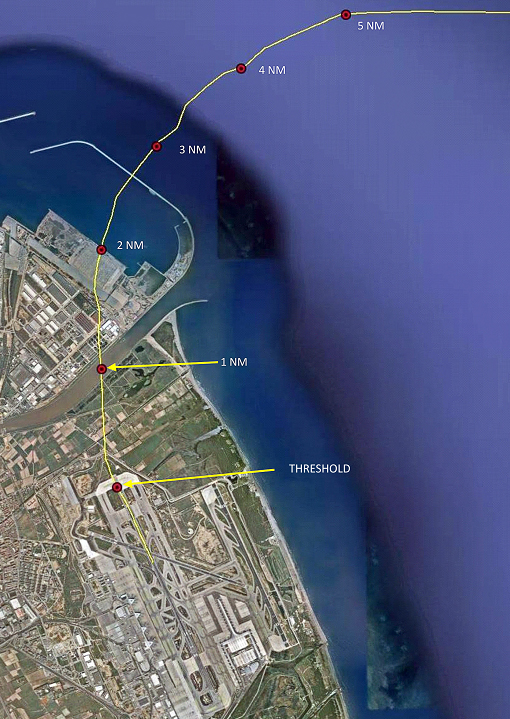 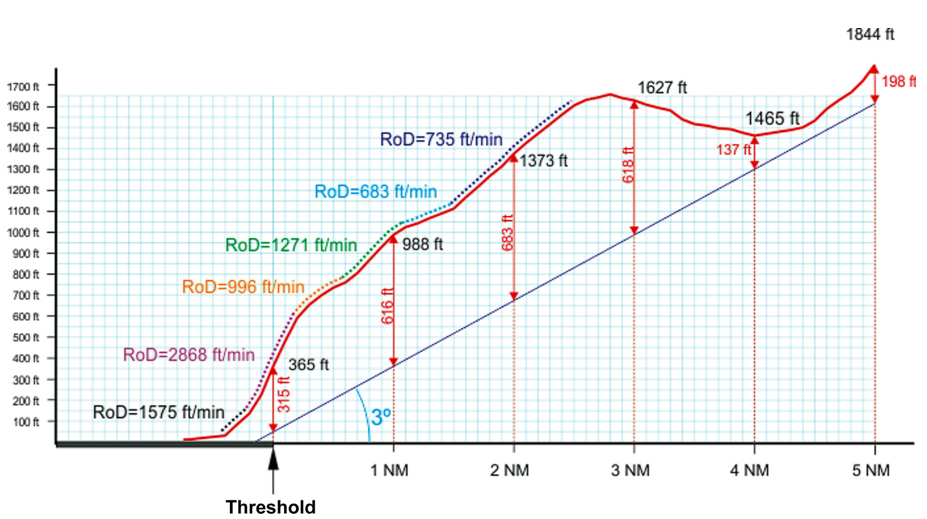 Descent was continued at an average of 1000 fpm until the aircraft was almost over the runway threshold with no prospect of achieving a touchdown on the runway if that rate of descent was continued. At an altitude of 600 feet, the commander, having seen the hesitation of the First Officer given the unstable condition, took control and immediately deployed the airbrakes to increase the rate of descent to almost 3000 fpm and turned 40° left to line up with the runway. The airbrake deployment activated an EICAS caution (because such deployment is notified as unsafe below 800 feet - and is prohibited below 300 feet) but this was ignored by the crew. Almost immediately, Terrain Avoidance and Warning System (TAWS) Hard Warnings of ‘SINK RATE, PULL UP’ commenced and ‘PULL UP’ continued for 12 cycles until it was automatically de-activated at 30 feet agl. There was no reaction from either pilot to these warnings.

The runway threshold was overflown at a height of 365 feet, at which point the First Officer called the high sink rate. At 370 metres beyond it, the Captain started the flare by raising the nose 6° and reducing the rate of descent to 1575 fpm; the First Officer added thrust on the Captain’s instruction to reduce the sink rate. Runway contact by the right main gear and nose gear reaching almost 3.7g was recorded and a bounce followed. The right main gear then touched the runway again with almost 2.5g being recorded but this time the other legs followed, the ground spoilers auto deployed and the aircraft stayed on the ground. The aircraft was slowed to taxi speed well before reaching the end of the 3352 metre-long runway and then taxied to its parking stand in accordance with ATC instructions. The two following aircraft went around on account of the adverse weather now closing in on both the airport and the 25R approach. Both had advised ATC in advance that if they did so, it would be with a left turn rather than ahead in accordance with the standard missed approach procedure in order to remain clear of the weather.

Once the aircraft was parked, the flight crew were advised of a minor neck injury sustained by the cabin crew because of the hard landing and recorded the latter in the aircraft Technical Log. The subsequent inspection in accordance with Aircraft Maintenance Manual requirements found significant damage to the aircraft structure at the points where the landing gear assemblies were attached and the aircraft was withdrawn from service pending repairs.

The weather conditions which had prevailed during final approach were reviewed and it was found that, as the storm had moved towards the airport from the north, the wind had veered from a mean of 170° to a mean 360° and increased in strength. A SIGMET had been in force to alert to the general disposition of adverse weather.

The Investigation considered the failure to make a go around and concluded that, had the crew adhered to published procedures, they could have detected the need to go around on three occasions:

It was considered that “the delay in the decision (to go around), conditioned by the desire to land before the storm moved in over the airport, meant that the crew worked the aircraft into a situation from which it was difficult to exit”. However, it was also considered that a decision to go around and avoid the storm would have been the best option “since any southerly deviation course would have been feasible, with ATC being responsible for ensuring aircraft separation during the manoeuvre”.

The Investigation attempted an analysis of the Human Factors issues involved in the approach but this was hindered by the absence of the (overwritten) CVR detail.

It was concluded that the investigation had identified significant shortcomings affecting operational safety at Air Nostrum. It was also noted, in respect of the failure to preserve the CVR record of the accident approach that:

“Although EU OPS 1.160 sets out the obligations of air operators as regards the preservation, production and use of flight recorder recordings in the event of an accident or incident, this investigation has revealed that…..practically no Spanish operator has procedures in its manuals intended to preserve flight recorders after an accident or incident, resulting in the loss of vital information during several investigations”.

The Investigation found that the Cause of the accident was:

“The execution of a de-stabilised approach brought about by the Captain’s decision to try to descend at rates in excess of 2,500 ft/min and with the air brakes deployed from 600 ft AGL to the ground.”

The following Contributory Factors were also been identified:

Three Safety Recommendations were issued as a result of the Investigation as follows:

- Include in the PRM (“Pilot Reference Manual”) the need to have checklists and briefings completed as one of the criteria required (for) an approach (to) be regarded as stabilised.

- Clarify that the VITAL ITEMS call out confirms a situation but does not replace the execution of normal checklists.

- Replace the term “recommended” from the actions contained in its manuals in regard to the ground proximity alerts issued by the EGPWS, thus removing the option of not carrying out actions that should be executed immediately and unfailingly.

- Modify the “Before Landing” checklist so that it reflects the most commonly accepted checklist writing criteria.

- Include the need to perform a go around whenever the required visual references are lost during a visual approach. [REC 15/13]

- Through scenarios as demanding as the one involved in this accident, and stressing crew coordination and CRM skills.

- By writing guidelines that facilitate the modification of operations in those cases where the anticipated procedure is constrained, and that it include them in its operational documentation and provide the relevant training to its crews. [REC 16/13]

The Final Report of the Investigation was approved on 30 January 2013 and subsequently made available in English translation.