On 19 January 2010, PSA Airlines CRJ 200 began take off from Charleston with an incorrect flap setting. After late crew recognition, a rejected take off was commenced at V1+13KIAS and an overrun into the EMAS bed at approximately 50knots followed. It was noted that had the overrun occurred prior to installation of the EMAS bed, the aircraft would probably have run down the steep slope immediately after the then-available RESA. The flap setting error was attributed non-adherence to a sterile flight deck. The late reject decision to an  initial attempt to correct the flap error during the take off.

On 19 January 2010, a Bombardier CRJ 200 being operated by PSA Airlines on a domestic passenger flight departing Charleston to Charlotte NC carried out a high speed rejected take off in normal day visibility and overran the end of the dry runway 23 into an EMAS installation. The aircraft stopped within the EMAS in line with its design parameters applicable to the aircraft type and suffered only minor damage. None of the 34 occupants were injured. 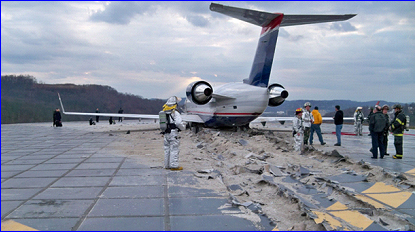 An Investigation was carried out by the National Transportation Safety Board (USA) (NTSB). It was established that both pilots were experienced on the aircraft type. The correct trailing edge flap setting had been called during taxy out by the Captain who had been PF, but Flap 8 had then been set and called by the First Officer and specifically acknowledged as such by the Captain. This error sequence was found to have occurred in the context of extensive “non pertinent conversation” in contravention of the applicable sterile flight deck regulation. The investigation concluded that “the rapid and perfunctory manner in which the flight crew conducted the Taxi Checklist resulted in the Captain not visually comparing the airplane’s flap position with the aircraft communications addressing and reporting system data.”

Flight Data Recorder (FDR) and Cockpit Voice Recorder (CVR) data showed that the take off roll on Runway 23 proceeded normally until just below the (correctly calculated) V1 speed of 127 kt IAS when the flaps began to move from 8 to 20. Almost immediately after V1 had been called, the CVR recorded the sound of the Master Caution and Flaps and Spoiler configuration aural alerts. The Captain initiated a rejected takeoff about 5 seconds after he had selected flap 20, by which time, the aircraft was at approximately 140 kt IAS, 13 knots above V1.

It was calculated by the aircraft manufacturer during the investigation that, in the prevailing conditions, had the aircraft been accelerated to V1 and then stopped, it would have done so about 1750 m from the beginning of the takeoff roll on the 1980 m long runway.

Because of the delay in initiating the RTO, the aircraft ran off the end of the runway and after 50 ft, entered the EMAS bed at about 50 kt IAS. Three seconds later, it stopped 128 ft into it with about 277 ft of arrestor bed remaining. Damage to the aircraft was only minor and limited to the flaps, landing gear, and landing bay gear doors.

The EMAS installation - a 123 m long bed set back 15 m from the runway end - had been completed in October 2007 and had replaced a Runway Safety Area (RSA) which had been only 36 m long. It was noted by the investigation that if the overrun had occurred prior to the EMAS installation, the aircraft would most likely have continued beyond the RSA and down a steep drop of about 350 ft which began immediately after it.

The full NTSB Final Report of the Investigation includes the following Probable Cause, determined by NTSB on 29 October 2010 as:

It was also noted that “contributing to the survivability of this incident was the presence of an engineered materials arresting system beyond the runway end”.