On 9 May 2011, a Bombardier Challenger 850 began a positioning flight night take off from Dubai aligned with the right hand edge of runway 30 for which take off clearance had been given. The error was not detected until a collision with a lighting installation after which a high speed rejected take off was made. The Investigation noted that the Captain had lined up the aircraft on the runway edge in good visibility before passing control for the take off to the low-experience First Officer. It was concluded that the crew failed to sufficiently prioritise their external situational awareness.

On 9 May 2011, a Bombardier Challenger 850 being operated by Gama Aviation on a positioning flight from Dubai to Dammam Saudi Arabia with just the flight crew and one cabin crew on board inadvertently attempted to take off at night in normal visibility aligned along the right hand edge of runway 30 for which take off clearance had been given. The error was not detected until a collision with a lighting installation after which a high speed rejected take off was made. There were no injuries but damage was caused to the right hand wing by impact with the fixed lighting which was also damaged. 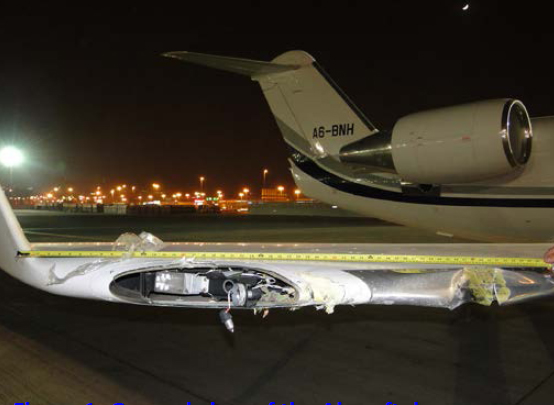 An Investigation was carried out by the Air Accident Investigation Department of the GCAA. The records of flying experience for the two pilots showed that the 50 year old Co-Pilot had little time on the aircraft type (145 hours) and low total flying experience (2650 hours) compared to that of the 49 year old aircraft commander (12275 total flying hours including 3800 hours on type) thus creating a potentially steep authority gradient between the two pilots. It was established that the First Officer had been PF but because taxiing was exclusively a left hand seat duty, transfer of control was required once the aircraft had been lined up on the departure runway by the aircraft commander. The rejected take off was only initiated following the collision with the ground lighting unit and was from 90 knots after a call to that effect by the aircraft commander. It was noted that Runway 30 was 60 metres wide and 4090 metres in length.

A number of findings were made including the following:

It was noted that “although the company procedure in the “Before Takeoff Checklist” was according to the minimum standards of the Civil Aviation Regulations and recognised SOP, the procedure did not protect the crew from mistake line up of the aircraft. On the other hand, taxiway to runway lead-in lines and lights were obvious enough (and) if they were tracked properly, they would have led the Aircraft to the runway centreline.

The Investigation found that the Probable Cause of the Serious Incident was:

A Contributing Factor was also identified as:

“Neither of the two pilots realised the misalignment situation due to their situational awareness (being) overwhelmed by activities not enabling them to have adequate peripheral vision outside the cockpit.”

Four Safety Recommendations were made:

The Final Report of the Investigation]was issued on 22 November 2011.