On 8 January 2016, a Bombardier CRJ200 crew were suddenly presented with a failure of one of the two main PFDs and a consequent uncommanded Autopilot disconnection during the cruise in dark night VMC conditions. No attempt was made to identify the failure as a single system fault and to maintain control using the second serviceable main PFD - which had the same indications as the Standby Horizon. Control of the aircraft was lost beyond possible recovery with terrain impact occurring 80 seconds after the initial appearance of erroneous PFD indications which were attributed to malfunction of the corresponding IRU.

On 8 January 2016, a Bombardier CRJ200 (SE-DUX) being operated by West Atlantic on commercial cargo flight from Oslo to Tromso as Air Sweden 294 was in the cruise at FL 330 in dark night VMC when abnormal pitch indications were displayed on the Captain's PFD. A MAYDAY was declared to ATC but control of the aircraft was subsequently lost and the aircraft crashed into terrain inverted and at high speed less than a minute later. The aircraft was destroyed and both pilots were killed. No signal was recorded from the ELT.

An Investigation was carried out by the Swedish Accident Investigation Authority (SHK). The aircraft was fitted with a DFDR and a CVR which were both recovered and all their recorded data was successfully downloaded despite their having sustained significant external damage at impact. However, the process of validating the DFDR data led to the finding that four of those which would have been potentially useful - pitch angle, roll angle, magnetic heading and ground speed - "were not compatible with the aircraft's actual movement". The four parameters concerned were all derived from the No 1 IRU which was the source of indications on the Captain's PFD. Pitch angle was recalculated using TAS, altitude and angle of attack, the latter used in place of bank angle which meant that "there might be an error of a few degrees in case of large bank angles".

It was a noted that the 42 year-old Captain, who was PF for the accident flight, had a total of 3,365 total flying hours of which 2,208 hours were on CRJ variants - 1,569 hours on the CRJ200 and 639 hours on the CRJ 900 (all as First Officer with a previous employer). He had received his basic flight training in Spain and had been promoted to Captain after qualifying for his ATPL in March 2014 with the required skill test for the licence being conducted on the accident aircraft type. The 33 year-old First Officer, had a total of 3,232 total flying hours including 1,064 hours on type. He had received his basic flight training in France and had gained earlier experience on the BAe ATP aircraft with the same operator. All communication between the two pilots recorded on the CVR, both operational and private, was in English. No evidence was found that that either pilot had received any basic training in aerobatic flight.

It was established that the flight had been uneventful until the crew were in the process of completing the approach briefing whilst level at FL330 shortly before they expected to begin the descent to Tromso. The evidence available indicated that the Captain's PFD suddenly began to indicate a sharp increase in pitch angle despite the fact that the aircraft remained in level flight and the AP simultaneously disconnected automatically. The indications of pitch attitude on both the First Officer's PFD and the Standby Artificial Horizon continued to display the 1° pitch up normal for the cruise. Within 3 seconds, the control column was pushed forward and the pitch trim began to be adjusted from the left control column switch. Two seconds later, the recorded pitch angle exceeded 30° down. The sudden change of pitch created negative 'g' loading and 7/8 seconds later, 'Bank Angle' EGPWS Warnings were annunciated and the Captain began asking for "help" from the First Officer who had not previously spoken. Soon afterwards, Vmo and Mmo were simultaneously exceeded followed after six seconds by Md, the Maximum Design Diving speed - M0.91 - being exceeded too. Thirty seconds after the upset had begun, with the aircraft descending through about 24,000 feet and the recorded speed at 400 knots, the First Officer transmitted a MAYDAY call to ATC, which was acknowledged. However, it was considered by the Investigation that prior to this time, the airspeed and pitch attitude of the aircraft had already significantly exceeded the limits of the design flight envelope and that this "in combination with the spatial disorientation of the flight crew" was likely to have meant that "the possibilities to regain control of the aircraft were limited". The aircraft collided with terrain inverted one minute and twenty seconds after the first abnormal indications had appeared the Captain's PFD.

The ground track of the descending aircraft derived from ATC sources is shown in the illustration below. 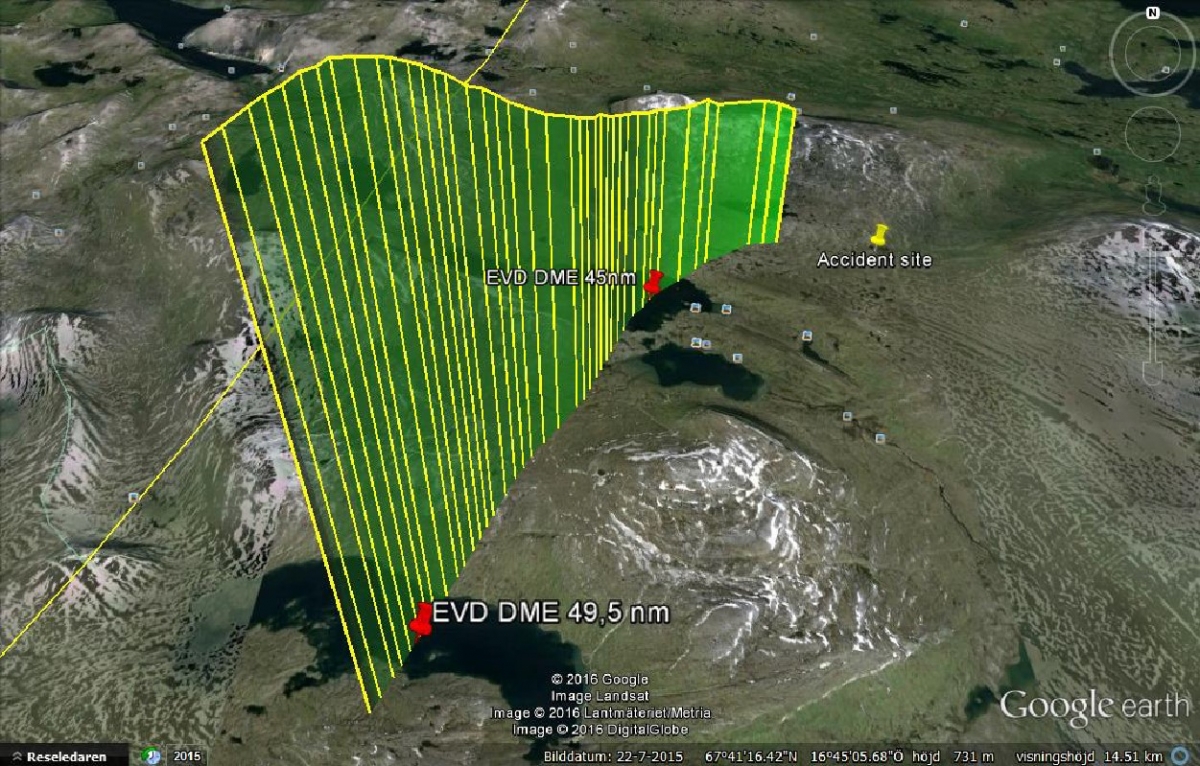 It was found that the only plausible explanation of the erroneous display of pitch attitude on the Captain's PFD as recorded on the DFDR was an "internal malfunction" of IRU1 which, under normal switching, when abnormal data was first displayed and was not altered thereafter, would have been the sole source of the attitude indications on the Captain's PFD during the upset. However, neither the Investigation nor the IRU Original Equipment Manufacturer (OEM) were able to find any similar IRU malfunctions and the OEM "performed physical tests and software tests without being able to reproduce the scenario". In respect of the Bank Angle warnings which began and continued during the upset, it was noted that they are generated using both the pitch and yaw gyros which "means that, upon manoeuvring in several dimensions simultaneously, the roll and heading information will become erroneous if the pitch gyro provides erroneous information".

The divergence between the achieved pitch attitude during the upset (green line) and the pitch attitude generated by the malfunctioning IRU1 and displayed on the Captain's PFD. [Reproduced from the Official Report]

The Investigation surmised that the onset of the abnormal indications was likely to have constituted a "surprise" for the Captain and that this when caused by unexpected changes "can affect or delay rational behaviour". In this context a definition of surprise as "the emotionally-based recognition of a difference in what was expected and what is actual" by ICAO was noted. The importance of using (correct) flight instrument indications when there is, as in this case, no external visual reference, was noted given that there was no evidence that either pilot realised that the Captain was attempting to control the aircraft using a single faulty display when the two other available attitude displays continued to show the actual pitch attitude. It was considered that the negative 'g' which occurred during the 'bunt' manoeuvre which resulted from the Captain's rapid initial pitch down is capable of causing an "inversion illusion" - the feeling of being upside down and that this may have led to the roll inputs which were recorded following this initial manoeuvre.

Once the upset was quickly developing, it was noted that the composition of the picture on the faulty PFD would have been affected by the built-in de-clutter function, the appearance of chevrons and the removal of comparator cautions designed to alert to differences between the two PFDs which in the case of pitch or bank indications are designed to direct both pilots' attention to the Standby Artificial Horizon so as to determine which PFD is correct. The provision of accessible information on these subjects was found to be lacking. It was also noted that "there are no regulatory requirements for standard callouts for abnormal or unusual situations".

Overall, it was considered that "the rapid change of the pitch angle indicated on PFD 1, the severe changes in g-loads that the crew was subjected to and the large number of audio and visual warnings probably contributed to the pilots focusing on their on-side PFD units". It was concluded that "these conditions, the fact that there was no training method for effective communication in an unexpected or abnormal situation and that the crew therefore had not practised this" had contributed to the crew not being able to jointly identify the problem in time to prevent an unrecoverable loss of control from developing.

The Investigation took the view that the best generic way to reduce the risk of repetition of an event such as the investigated one would be to focus on "general methods" to resolve unpredictable situations rather than attempting "to anticipate all possible scenarios". It was considered that this approach would require "a general system of initial standard calls for the handling of abnormal and emergency procedures and also for unusual and unexpected situations". Such a system would be based on a series of universally prescribed "initial standard calls" to be used in the event of a sudden unexpected situation to foster "clear, precise and bidirectional communication between the pilots". It was further considered that whilst it was recognised that "this is already in place within some aircraft manufacturers' manuals and some operators [...] it is surprising that this is not a standard throughout the commercial air transport industry".

A number of issues relating to the Swedish Search and Rescue function, including but not limited to liaison with ATC and delays in response, were also identified.

The Investigation concluded that the Cause of the accident was "insufficient operational prerequisites for the management of a failure in a redundant system".

It was also concluded in respect of Risk that "the fact that fault descriptions regarding aircraft and its components are reported in a less detailed manner might imply that the faults will not be identified and corrected in an efficient way" and that "this can in turn lead to a flight safety issue as, for instance, intermittent faults cannot always be detected by general tests".

A total of 14 Safety Recommendations were made as a result of the Investigation as follows:

The Final Report was published on 12 December 2016.