On 2 February 2019, a Bombardier CRJ200 narrowly avoided collision with part of a convoy of snowplough vehicles which had entered the landing runway without clearance less than 10 seconds before touchdown and begun to position on the centreline. The Investigation found that despite the prompt initiation of a go-around on sighting the vehicles, the aircraft was likely to have cleared them by less than 100 feet. A number of opportunities for improved ground vehicle movement procedures were identified and the incursion was seen as indicative of a general need to more effectively address this risk at Canadian airports.

On 2 February 2019, a Bombardier CRJ200 (N902EV) being operated by SkyWest Airlines on a scheduled international passenger flight from Chicago O’Hare to Montréal as SKW3130 had been cleared to land on runway 24L in day IMC but had to discontinue its approach as snow clearance vehicles entered the runway ahead when the aircraft was less than 160 feet agl. It subsequently overflew the lead vehicles, which by then were on the runway centreline, by less than 100 feet. The flight was subsequently completed without further event 15 minutes later.

An Investigation was carried out by the Transportation Safety Board of Canada (TSB) using recordings of relevant communication and radar data.

The snow clearance convoy involved was made up of 6 snow clearing vehicles and a pickup truck driven by the Team Leader who was responsible for communications with the GND controller and the convoy. In accordance with working procedures, the driver of one of the six snow clearing vehicles was designated as the Convoy Lead. The Team Leader had been a full time employee of the airport operator for 8½ years and had been working in the unit providing snow clearance throughout that time, having been a Team Leader for 2 years. The Convoy Lead was employed in the unit only for the winter season but was on his third consecutive period of such seasonal employment in the unit. All the other vehicle drivers were seasonal employees. All convoy vehicles had two radios, one for communication with ATC and the other for internal communications for use during tasks or when travelling to or from them. There was no evidence that communication on either of these frequencies had been anything but normal in the period leading up to the incursion. It was noted that “the Team Leader is normally the only one who communicates with ATC” although all airside vehicle operators receive comprehensive training on radio communications as well as on convoy transit and aerodrome procedures. Given the varying experience levels of seasonal employees, less experienced drivers “are often placed behind the Convoy Lead, in the convoy’s 2nd and 3rd positions” and are thereby led and followed by more experienced drivers.

There was no low cloud but prevailing weather conditions included a visibility of 2000 metres in light and drifting snow in sub zero conditions. The CRJ crew reported that they had only begun to gain visual contact with the runway environment as they descended through 400 feet agl. The TWR controllers on duty subsequently stated that they had no sight of the runway 24L threshold area and could only see any vehicles and aircraft in its vicinity on their corresponding ground (A-SMGCS) and air radar displays. All convoy vehicles were fitted with a Vehicle Locator Transmitter (VLT) but the one fitted to one of the vehicles in the middle of the convoy was inoperative, an allowable defect for vehicles not at either the front or the back of a convoy.

It was established that the snow clearing team had completed work on runway 24R and had been advised to position to runway 24L and expect to be tasked with snow clearance work there. GND control issued a transit clearance to the convoy which would get it to the holding bay at the beginning of runway 24L.The Team Leader, who was at the rear of the convoy having been - as required - the last vehicle to exit the runway, took the clearance but when he only read back part of the ATC instruction, the Convoy Lead, who had heard the (lengthy) ATC instruction on his radio, “had then read back the instruction to the Team Leader over the internal convoy frequency” in order to “expedite and minimise radio communications on the GND frequency and to ensure that the Team Leader knew that the Convoy Lead had understood the instructions”. A subsequent discussion between the Convoy Lead and the Team Leader confirmed that the latter had not read back the clearance in full and also included whether the ATC instruction had included a requirement to “hold short” of the runway on reaching it or not. In fact it had not, but the Team Leader “reconfirmed” his readback to the GND controller and added the requirement to hold short of Runway 24L on reaching, which the GND controller then acknowledged. As the convoy proceeded, the Team Leader remained at the rear. 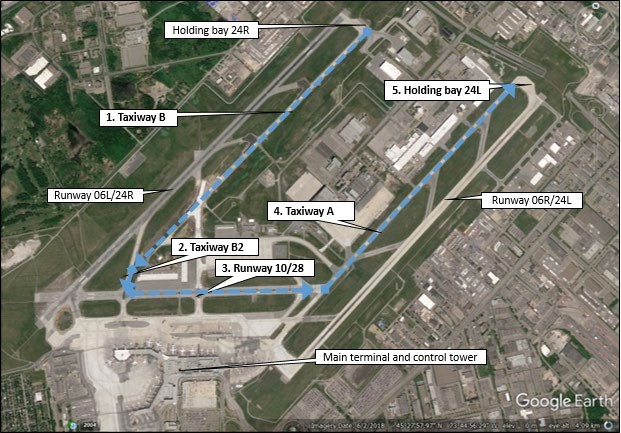 The route followed by the snow clearance vehicle convoy. [Reproduced from the Official Report]

The GND controller monitored the progress of the convoy at intervals. After five minutes, the convoy had reached position 3 on the illustration provided above and the Convoy Lead reported having begun to “plan the convoy formation and path along Runway 24L based on the snowfall intensity and the wind direction”. At this time, the CRJ200 had just been cleared to land on runway 24L. As the convoy reached its clearance limit, the 24L Holding Bay, the CRJ200 was approximately 1.3 nm from touchdown.

Half a minute later, the Convoy Lead crossed the runway holding point and continued onto the runway followed by the vehicles in position 2 and 3. The aircraft now had 0.3 nm to run and was at “approximately 157 feet agl”. The TWR runway controller saw the incursion on his ground radar display and the CRJ 200 flight crew saw the convoy partly on the runway and partly in the holding bay and immediately initiated a go-around. As they did this, the TWR runway controller instructed the aircraft to go around. It was noted that “neither the Team Leader nor any of the other convoy vehicle operators alerted the Convoy Lead to the runway incursion over the radio”.

Six seconds after the flight crew had read back the instruction to go around, “the Convoy Lead reached the runway centreline and the aircraft flew directly over his vehicle”. Two seconds later, the GND controller informed the Team Leader that an incursion had occurred. Until hearing the sound of the aircraft overhead, “no one in the convoy was aware that a runway incursion had occurred” and the Team Leader, who was approaching the entry to the holding bay subsequently stated that he had been “expecting to see the Convoy Lead perpendicular to the runway, stopped in the holding bay” but instead saw this vehicle on the runway as the aircraft flew over. Once established in the go around, the CRJ200 flight crew confirmed that they had seen the snowploughs and ten seconds after the Convoy Lead had reached the runway centreline, the third in line snowplough crossed the runway holding position followed by the fourth stopping just past the runway holding point.

The runway was then closed and the planned snow clearance operation was commenced whilst the CRJ200 completed a 2nd ILS approach and landed without further event on runway 24R about 15 minutes later. It was not possible to determine the exact height to which the aircraft descended but it was concluded that it “may have been as low as 107 feet agl”. The width and length of the vehicles overflown was recorded but their height was not.

The Investigation found that between 2001 and 2019, there had been an average of 9.1 runway incursions per year (in the case of 2019, the events counted did not include December) which were not attributed to either pilots or controllers with no evidence that there was any reducing trend.

The four main ways to mitigate the risk of runway incursions were considered:

More generally, it was observed that “the TSB is concerned that the rate of runway incursions in Canada and the associated risks of collision will remain until effective defences tailored to address identified hazards are implemented at airports and in aircraft, vehicles, and air traffic service facilities across Canada”.

In this particular incursion, no evidence was found of any driver or controller fatigue or physiological factors but it was evident that the application of driver prospective memory had been ineffective and considered that this “could be explained by two possible factors: distraction and insufficiently salient target cues”. It was considered of note that once the Convoy Lead had entered the runway, three other vehicle operators had followed “out of habit, as they are trained that this is their primary responsibility” and that “none of them stopped in time, took action to prevent or reduce the severity of the incursion, or alerted the Convoy Lead to the incursion over the radio”. It was also considered that it was of considerable significance that the applicable convoy procedures required only one supervisory person, the Team Leader, to take responsibility for compliance of the convoy with ATC instructions without being required to be driving the first vehicle to enter any runway. Nevertheless, it was accepted that such a requirement “may not eliminate the risk of runway incursion by the team leader or supervisor themselves”. Finally, the opportunity for ATC to make use of the phrase ‘Hold Short’ when issuing instructions that direct ground vehicles to runways was noted as a possible way to reduce the chances of an incursion.

Two formally-stated Findings as to Risk were as follows:

The Final Report of the Investigation was authorised for release on 8 January 2020 and it was officially released on 21 January 2020. No Safety Recommendations were made.