On 21 January 2011, a Belarusian Bombardier CRJ200 failed to fly the prescribed missed approach procedure at night in IMC and when ATC observed a developing conflict with another aircraft which had just departed another runway with a conflicting clearance, both aircraft were given heading instructions to mitigate the proximity risk. The resulting CPA was 1.8nm at an altitude of 1600 feet. The subsequent investigation attributed the pilot error to a change of aircraft control in the flare when it became apparent that a safe landing was not assured.

On 21 January 2011, a Bombardier CRJ200 being operated by Belarusian AL on a scheduled passenger flight from Minsk to Stockholm carried out a missed approach from runway 26 at destination at night in Visual Meteorological Conditions (VMC) from a low height. After failing to follow the prescribed missed approach track, it came into proximity in Instrument Meteorological Conditions (IMC) with a BAe ATP being operated by Swedish airline Nextjet on a scheduled domestic passenger flight from Stockholm to Lycksele which had just departed from runway 19R. No abrupt manoeuvres resulted and none of the respective 36 and 26 occupants of the two aircraft were injured.

An Investigation was carried out by the Swedish AIA. The tracks followed by the two aircraft are shown on the diagram below reproduced from the Official Report. It can be seen that the extended centreline of runway 26 passes over runway 19R.

The BAe ATP from runway 19R under the control of TWR(W) ATC had initially been given a departure heading of 270º. The standard missed approach for the CRJ200, which went around from the flare after the aircraft commander considered that the very inexperienced First Officer who had been designated as PF had placed the too high at too fast a speed to safely complete a landing, was prescribed as a right turn onto a heading of 300º. According to the IAP, this heading was to be made at the MAPt which was defined as the DH for the Instrument Landing System (ILS) procedure - 380 feet arte, but in this case might reasonably have been expected to commence by the end of the runway. However, the aircraft commander, who had taken control on commanding a go around, continued approximately on runway heading beyond the runway end before beginning a left turn and reached a heading of 227º before heeding repeated instructions from the TWR(E) controller to take up the required 300º heading. Meanwhile, the TWR(W) controller recognising the potential for a conflict instructed the BAe ATP to turn left onto a heading of 200º. The consequence was that the two aircraft passed with a lateral separation 1.8nm when both at 1600 feet altitude. 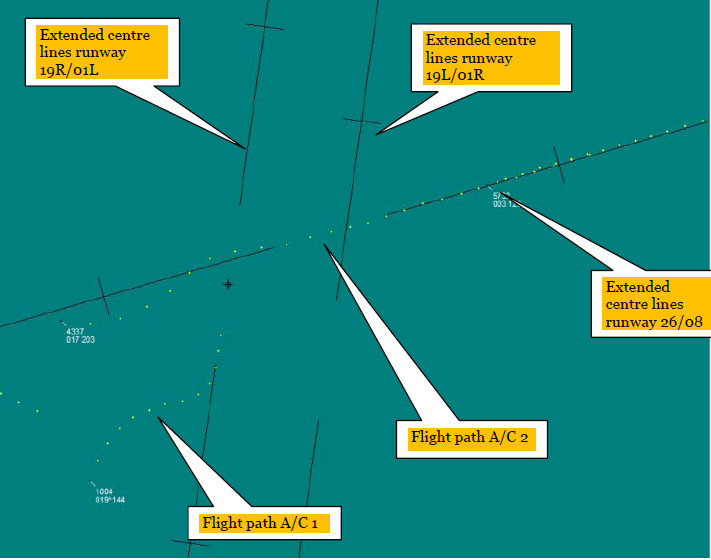 The relative tracks of the two aircraft (reproduced from the Official Report - the gaps in between the runway extended centrelines are the runways; north is at the top)

It was noted that the First Officer on CRJ 200 had extremely low experience having only accumulated 548 hours of total flying time, but also that the approach being flown was not regarded as likely to present any difficulty.

It was concluded that the Cause of the Incident was:

“The Commander’s taking over the controls at a late stage probably resulted in his not having sufficient remaining capacity to immediately follow the published missed approach procedure.”

And that a Contributing Factor to the infringement of separation was that “the go around was initiated approximately 1.24nm (beyond) the published missed approach point.”

The Final Report of the Investigation Final report RL 2012: 03e was issued on 8 March 2012. No Safety Recommendations were made.