On 17 March 2017, a Bombardier CRJ 700 which had just landed on runway 35R at Lyon Saint-Exupéry was about to cross runway 35L as cleared when its crew saw the departing Airbus A319 on runway 35L accelerating towards their intended crossing position and braked to a stop before entering the runway. The Investigation found that both aircraft had complied with all instructions issued by the TWR controller and concluded that safety management processes at the airport were not commensurate with the incursion risk involved and had been unchanged since an almost identical incident a year previously.

On 17 March 2017, during day VMC, a Bombardier CRJ 700 (F-GRZL) being operated by Air France subsidiary HOP! on a scheduled domestic passenger flight from Biarritz to Lyon as HOP83A which had just landed on runway 35R was cleared to cross runway 35L by a TWR controller who had just cleared an Airbus A319 (G-EZAZ) being operated by Easyjet on a scheduled domestic passenger flight from Lyon to Nantes as EZY748Z to takeoff from the same runway. The CRJ 700 crew checked the runway before crossing and when they saw the A319 approaching at high speed, brought their aircraft to a stop clear of the runway just ahead of the controller recognising the conflict and an actual runway incursion was avoided.

An Investigation was carried out by the French Civil Aviation Accident Investigation Agency, the BEA. The experience of the flight crew involved was not recorded but it was noted that both crew were based at Lyon. It was noted that the TWR controller involved had been qualified for control positions at the airport since 2005 after beginning his controller career at Reims ACC in 1996.

It was noted that the two parallel runways at the airport “dependent with respect to wake turbulence (and) are normally managed as a ‘nominal twin runway’ with takeoffs using the inner runway 17R/35L and landings being made on the outer runway 17L/35R”. When so managed, a controller may accept a landing on the inner runway if the visibility is greater than 5 km and the ceiling higher than 1,500 feet. Runway 35L is relatively flat along its complete length so it is possible for the crew of an aircraft waiting to cross it to have a good view of its full length. It was established that at the time of the event, the prevailing weather conditions were CAVOK (cloud and visibility OK) and therefore there had been no impediment to visibility from the TWR or to pilots. It was also noted that although a controllable stop bar system was installed to protect runways 17 and 35, it was only activated when LVP apply and that the available TWR ground radar display was not used when the meteorological conditions were good and all traffic could be observed directly from the tower.

The ground track of the two aircraft is shown in the illustration below with timed positions for clearance issue and pilot actions which also indicate the corresponding position of the other aircraft at that time. When the controller cleared the CRJ700 to cross 35L at position 3, the A319 was already accelerating on its takeoff roll and about 1000 metres from the intersection at which the CRJ700 had been cleared to cross. Aware of the possibility of conflict when crossing runway 35L and having covered this point, the locally-based CRJ700 crew had therefore both checked that runway 35L was actually free of traffic in good time before entering and on seeing an aircraft on the runway approaching the intersection at high speed, the PF Captain had braked and brought the aircraft to a stop before reaching the CAT I holding point. As the CRJ700 crew were braking, the TWR controller instructed them to stop but did not use the applicable emergency phraseology.

The English-speaking A319 PM Captain subsequently stated that when the speed of the aircraft was already in excess of 100 knots, “he thought he understood that the traffic then starting to vacate runway 35R had just been cleared to cross runway 35L” but, not being a French speaker, was unsure if that was what he had heard and judging that they would be past the rapidly approaching intersection before the other aircraft reached it, he had decided not to instruct the First Officer to reject the takeoff. He also stated that he could see that the CRJ700 had braked before it reached the holding point and that the A319 then passed the intersection concerned at a speed which had been “close to V1”. The Captain, who along with his First Officer was also based at the airport, observed that ATC use of “a mix of French and English in exchanges significantly reduced situational awareness for non French-speaking crews”. 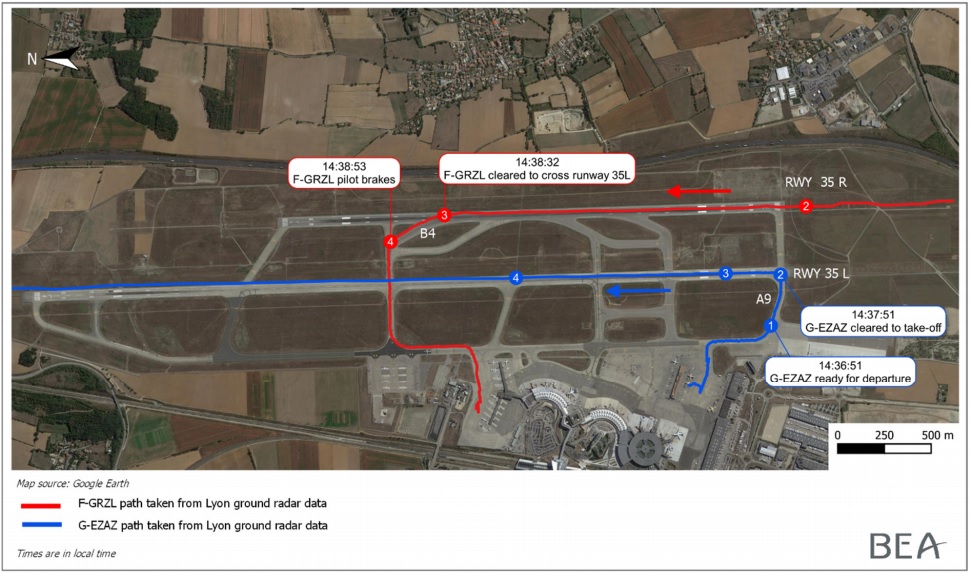 The ground tracks of the two aircraft with their relative positions annotated. [Reproduced from the Official Report]

The controller involved noted that the event had occurred towards the end of a run of inbound flights. He stated that when he had cleared the CRJ700 to cross the runway, he thought that his visual scan had not been sufficiently wide. He then moved the (green inbound flight) strip for the flight onto the runway 35L bay of his board above the (orange outbound flight) strip for the A319 and put a cross on it. He added that when he next looked out, he saw both aircraft and realised that there was a conflict and seeing that the CRJ700 was already taxiing slowly, had instructed it to stop.

A local investigation by the ANSP Service Quality and Safety subdivision decided that as the cause of the conflict was the controller’s conflicting clearances and since this was an (ultimately corrected) “solely non-systemic” error, it was not necessary to take any specific measure or to have the event examined by the “Local Safety Commission”. It was noted that the previous year, the Commission had investigated an event which was virtually identical to the one now being investigated externally, the only significant difference being that the flight crews of both the aircraft involved in the 2016 event had been English speakers. It was concluded that “the probability of this type of event re-occurring was low” and no safety action at either local or national level was recommended.

The role of the airport LRST, which met annually, was noted to be the consideration of occurrences such as the one under investigation and the submission of any proposals to the Airport Safety Promotion Committee. It was found that at its annual meeting in 2017 the LRST had “indicated that it appeared necessary and relevant to define hot spots for runway crossings” and, three years later, shortly before the publication of the Investigation Report, three hot spots relating to runway crossings were added to the aerodrome chart.

It was noted that in 2012, the Eurocontrol ‘Safety Improvement Sub Group’ had identified the detection of an occupied runway as one of its five safety priorities and an operational study carried out as follow up to this had concluded that “whilst the use of a visual memory aid (such as the strip board) is in theory a very reliable barrier, in practice, it is not an effective safety barrier”. With that in mind, the Investigation observed that the safety barrier which had operated in both the 2016 and 2017 events was the alert given by the pilots, which '“can only work if the language used for the radio exchanges allows all the actors to have good situational awareness, i.e. a common language".

The Conclusions of the Investigation as to the origin of the controller error which occurred and means by which the risk of conflict was avoided were, in summary, as follows:

The Final Report was published in English translation on 23 April 2020 after the initial and definitive publication in French on 26 March 2020.