On 20 July 2011, an Alliance Air CRJ 700 touched down over half way along the 9000 ft long runway at Kanpur after a stable ILS approach but with an unexpected limiting tailwind component and failed to stop before the end of the paved surface. Although an emergency evacuation was not necessary and there were no injuries, the aircraft was slightly damaged by impact with an obstruction. The subsequent investigation attributed the event to the commanders continued attempt at a landing when a late touchdown became increasingly likely.

On 20 July 2011, a Bombardier CRJ 700 being operated on a scheduled domestic passenger flight from Dehli to Kanpur by Alliance Air overran the landing runway at destination after a late touchdown in normal daylight visibility. Although an emergency evacuation was not necessary and none of the 59 occupants were injured, the aircraft was slightly damaged.

An Investigation was carried out by the DGCA. DFDR and Cockpit Voice Recorder (CVR) download was successful and the data was used to aid the Investigation. It was established that the aircraft commander was experienced and also designated as a Check Captain and been PF for the accident sector. However, the First Officer was inexperienced and the published extract from the CVR transcript showed no evidence of an effective monitoring role being performed. 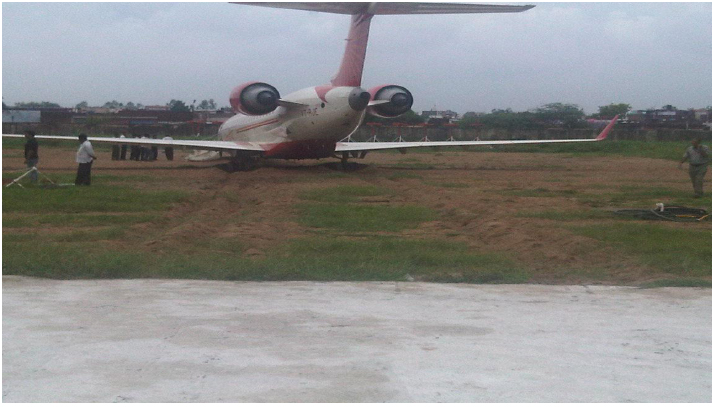 The only damage to the aircraft was to the left wing leading edge which collided and destroyed part of the Instrument Landing System (ILS) LLZ antenna resulting in a hole of approximately 7.5 cm diameter being made in the wing.

It was noted that the airport is a military one with a civil terminal facility. The single 2750 metre long runway has arrester wires at the ends and intentionally soft ground beyond. ATC service is provided by the Indian Air Force.

A full flap (45º) landing was planned with a calculated Reference Speed (Vref) of 128 knots and the ILS approach was uneventful until the flare for landing was initiated just below 50 feet. At that point, DFDR data showed that the aircraft had been subject to a tail wind component of about 10 knots, the applicable limit for landing. The wind being reported by TWR at the time of landing was still ‘variable at 5 knots’.

The flare did not lead directly to a normal touchdown but to a float above the runway at between 40 and 50 feet agl for 10 seconds. After touchdown just beyond the half way point of the runway, speed brake and thrust reverser deployment had been normal with positive deceleration occurring as the aircraft had rolled on the paved surface for almost 30 seconds before exiting the end of it at a groundspeed of approximately 44 knots whilst veering slightly right. After a further 7 seconds, during which time it travelled 60 metres, it came to a stop. Throughout this time the tailwind component was found to have remained in the range 11/12 knots.

At the prevailing ELW, it was found that “for a wet/contaminated runway, the actual landing distance required with full flaps was around (1500 metres)” which was more than had remained at touchdown. Since this distance was more than remained, an overrun was probable.

It was concluded that the Probable Cause of the Incident was that the commander had made a delayed touchdown while landing in marginal visibility conditions in rain onto a runway described as ‘wet with water patches’ after a prolonged float over the runway after the threshold. A Contributory Factor was identified as the aircraft experiencing a tail wind higher than the aircraft limitation during landing.

The Final Report was completed on 18 October 2011 and subsequently published.