On 25 October 2017, a Bombardier CRJ-900 crew lost directional control after touchdown at Turku in the presence of a tailwind component on a contaminated runway at night whilst heavy snow was falling. After entering a skid the aircraft completed a 180° turn before finally stopping 160 metres from the end of the 2500 metre-long runway. The Investigation found that skidding began immediately after touchdown with the aircraft significantly above the aquaplaning threshold and that the crew did not follow the thrust reverser reset procedure after premature deployment or use brake applications and aileron inputs appropriate to the challenging conditions.

On 25 October 2017, a Bombardier CRJ-900 (EI-FPD) being operated for SAS in their livery by CityJet under a wet lease contract making a scheduled international passenger flight from Stockholm Arlanda to Turku as SK4236 did not decelerate normally after making a night touchdown on the slush-covered destination runway. It hit runway edge lights and briefly left the runway whilst remaining on the adjacent paved surface before regaining it and making a counter clockwise rotation and coming to a stop on it but near the end of the runway pointing towards the landing threshold. It was decided that an emergency evacuation was not necessary and after the crew had recovered from their landing experience, the aircraft was subsequently taxied to the apron for passenger disembarkation. There were no injuries to any of the 92 occupants but all four mainwheel tyres were damaged beyond continued use as a result of the combination of prolonged locked wheel skidding and the collision with runway edge lighting.

An Investigation was carried out by the Finnish Safety Investigation Authority (SIAF). Relevant data from the FDR and CVR were downloaded and snapshots of FADEC data were also obtained. Exceptionally, the Investigation did not record the experience of the two pilots.

The flight crew were aware prior to takeoff from Stockholm that their arrival at Turku was likely to be in challenging weather and runway conditions. They noted that the surface wind favoured a runway 08 approach but suspected that the MDA for the non-precision VOR approach to that runway may well preclude the acquisition of the necessary visual reference to land. They also noted that the runway 26 tailwind component was close to 10 knots, the maximum for the CRJ900. Helsinki was selected as the destination alternate and 500kg of additional fuel was uplifted taking the aircraft ELW close to the performance-limited MLW at Turku.

On initial contact with Turku approximately 20 minutes prior their ETA, they were advised that runway surface friction with 2mm of slush present was ‘medium’ (equivalent to medium/poor braking action in the CityJet CRJ900 Performance Handbook) and the surface wind 120° at 16 knots. In reply to a question from the Captain, ATC advised that this surface wind would mean a 12 knot tailwind component for a runway 26. It was noted that this was above but close to the permitted maximum, but since the tailwind component was close to the limit, it was decided to continue for an ILS approach to runway 26 and if the tailwind component at that time was in excess of the limit on short final, they would fly a missed approach and divert to their alternate. The pilots were not informed of slush accumulation on the runway.

Some time later, ATC advised that the spot wind was 120° at 14 knots making the tailwind component 11 knots. Then, approximately 8 minutes prior to landing, the Captain compared the calculated landing performance requirements with the reported conditions and concluded that “the maximum performance-limited landing weight for the prevailing conditions was 36,000 kg”- but failed to compare this figure to the structural MLW for the aircraft type which was 34,065 kg (applicable Vref 141 KIAS). Although the ELW used by the crew was not recorded, it was estimated to have been in the range 33,800-33,980 kg but with a 10 knot tail wind component and the medium/poor braking action which prevailed, the maximum performance-limited landing weight for Turku had actually been 32,200 kg.

The aircraft was cleared to land when on short finals and almost immediately, with the aircraft at 500 feet aal (the reported height of the cloud base), the controller transmitted that the tailwind component had reduced to 10 knots. The Captain took over from the First Officer as PF and stated that they would land. The AP was disengaged at a recorded 121 feet agl and the aircraft subsequently crossed the runway threshold at 151 KCAS and a higher-than-normal descent rate; a firm main gear touchdown (1.95g) within the TDZ followed at 148 KCAS. The firm touchdown was immediately followed by selection of thrust reversers at the same time as the consequent extension of the compressed oleos caused the weight on wheels (WOW) switches to revert to ‘air’ mode. As a result of this, the thrust reversers did not deploy since this is inhibited in ‘air’ mode and they then remain locked out until reset which did not occur so that the thrust setting remained at reverse idle for the remainder of the landing roll.

At the same time, although maximum brake pressure was applied, it had no effect because the main wheels did not spin up on the slush-covered pavement surface due to the locked wheel protection feature and the anti-skid system did not release excessive pressure because wheel speeds remained low. The result was that the aircraft immediately entered a skid and deceleration was abnormally slow. A slight cross wind component from the left not corrected by into-wind aileron was enough to cause a slow drift towards the northern edge of the runway whilst the aircraft nose as pointing towards the opposite side of the runway (see the annotated photograph of the wheel tracks below). 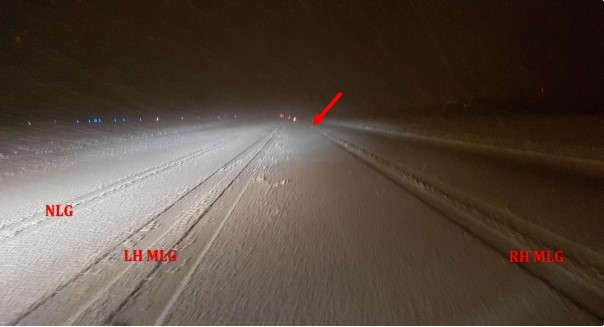 The tracks left by the skidding aircraft as it veered towards the runway northern edge. The arrow shows the position of the first of 5 out of 8 successive edge lights hit. [Reproduced from the Official Report]

Beyond the half way point of the 2500 metre-long runway, the aircraft collided with five out of a succession of eight runway edge lights whilst briefly and only marginally leaving the runway. Fully back on the runway, it then began a rapid turn to the left and the First Officer transmitted a MAYDAY call which there was no response to and was repeated. The left turn continued until the aircraft nose was facing the runway 26 threshold and, after travelling backwards for a short distance, the aircraft finally came to a stop with approximately that orientation.

The aircraft ground track and orientation derived from GPS and Heading data. [Reproduced from the Official Report]

The crew set the parking brake and the Captain made a PA “cabin crew at stations” which put them on alert for a possible emergency evacuation. By the time the First Officer had run the ‘On Ground Emergency’ Checklist, the Captain had assessed the situation as “apparently normal” and decided that an immediate evacuation was not necessary, so he made a further PA of “all normal” and then explained to the passengers that “the runway had been slippery and the situation was being investigated”. He judged that the aircraft was fit to taxi but ATC told the aircraft to hold position and wait for the RFFS to reach the aircraft. The flight crew discussed what had happened and noted that a ‘FADEC FAULT’ message for both engines had been displayed after touchdown. After the RFFS inspection had found no external damage, the crew requested and received clearance to taxi to the apron 7 minutes after the aircraft had come to a stop.

It was established that Turku ATC was manned by a trainee supervised by an On-the-Job-Training Instructor (OJTI) with the trainee, who was “in the final stages of training” in position during the approach and landing. Both controllers subsequently stated that although the visibility was recorded as 1700 metres, they had not realised that the aircraft had entered a skid on landing and had not heard the first MAYDAY call because the clearance to taxi to the apron was being transmitted at the same time. It was also clear that “the runway conditions transmitted to the flight crew were not representative of the conditions prevailing at the time of landing”.

The Context for what happened

With overwhelming evidence from the condition of the main gear tyres and the recorded flight data confirmed that dynamic aquaplaning on locked wheels had occurred, the Investigation carried out tests on critical components relative to the failure of the aircraft to decelerate to confirm that they had all been serviceable. An attempt was then made to establish what the actual runway surface contamination was at the time of the landing, since the most recent SNOWTAM prior to the landing, which had reported 2mm of slush over parts of the runway and estimated runway friction as “medium” had been issued 21 minutes earlier since when “moderate snow” had begun to fall. Approximately 25 minutes after the landing, a runway inspection was made and friction measurements taken. The measured friction coefficients were 22, 20, and 22 and it was considered “likely that the amount of snowfall on the runway had by that time exceeded the validity range of the friction measuring device for the type of deposit”. The Investigation examined a close-up photograph of the left main landing gear which had been taken on the apron approximately 50 minutes after landing - see below. The aircraft had taxied into this position and stopped approximately 15 minutes after the landing since when no significant amount of fresh snow had fallen on the area under the wing. It was therefore possible, by examining the wheel track depth, to estimate that the slush depth at the time of the landing had been over 10 mm, the 0°C ground temperature having accelerated the transition from fallen snow into slush. 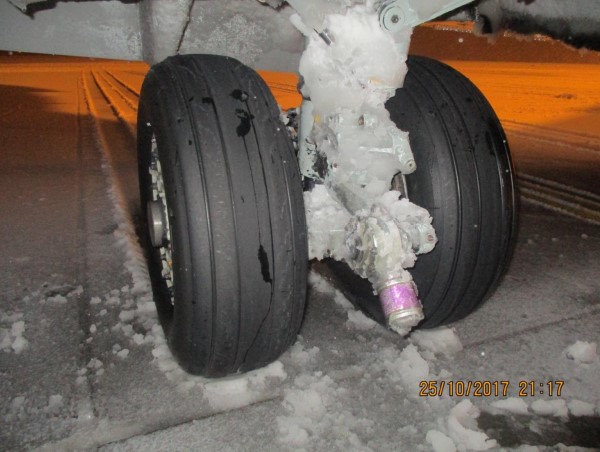 The left main landing gear 50 minutes after the landing with track depth under the wing giving an indication of actual slush depth at the time of the landing.

The CityJet Operations Manual (OM) was examined for relevant CRJ 900 procedures and it was noted that it specified that during landing, the brakes should be applied before the thrust reversers were deployed. It also instructs pilots to reduce the brake pressure during a skid until aircraft control is regained. Winter Operations guidance was found to include “planning to land on contaminated runway with tailwind should be avoided”.

The complexities of achieving and communicating meaningful direct or indirect indications of the likely effectiveness of braking action to landing aircraft when runways are contaminated or soon likely to become so were examined with particular reference to the report ‘Investigation on Winter Operations and Friction Measurement’ which was published by the Accident Investigation Board Norway (AIBN) in 2011. It was observed that many of the safety issues discussed in this work were far from resolved, the lack of standardised communication of likely braking action being just one of these.

Observations on the role of the flight crew in the event included the following:

Seven Conclusions from the Investigation in respect of both the cause of the event and the circumstances, both direct and indirect, in which it occurred were summarised as follows, where a factual finding is followed in italics by the conclusion in that respect:

The Final Report was published on 23 October 2018.