On 1 February 2015, a Bombardier CRJ 1000 departed from Pamplona with slush likely to have been in excess of the regulatory maximum depth on the runway. On landing at Madrid, the normal operation of the brake units was compromised by ice and one tyre burst damaging surrounding components and leaving debris on the runway, and the other tyre was slow to spin up and sustained a serious flat spot. The Investigation concluded that the Pamplona apron, taxiway and runway had not been properly cleared of frozen deposits and that the flight crew had not followed procedures appropriate for the prevailing conditions.

On 1 February 2015, a Bombardier CRJ 1000 (EC-LPG) being operated by Air Nostrum on a scheduled passenger flight from Pamplona to Madrid as ANE 8529 departed from a runway which was contaminated with slush and on landing at Madrid in normal day visibility, one of the main gear tyres blew leaving debris from the tyre and the surrounding damaged structure on the runway. Further tyre damage was found once parked.

It was established that when the aircraft had arrived at Pamplona the previous evening for a nightstop, a considerable amount of snow had been observed on the main landing gear. It was reported that most of this had been removed manually and any that remained in difficult to reach areas "melted over the course of the night" during which it continued to snow.

The next morning, it was still snowing. The flight crew stated that when they arrived at the airport, it was still closed and the only weather information they had received pre flight was a "TAFOR" which included the likelihood of showers or longer periods of sleet or rain with the possibility of thunderstorms throughout the morning and METAR timed 2 hours prior to their ETD. The Meteorological Office at the airport reported that at about the time that the airport opened it had started snowing again and records showed that between then and the time the flight had taken off 45 minutes later, moderate snow had prevailed for much of the time. The manoeuvring area was reported by the crew to have been covered with "snow mixed with ice pellets" with airport snow-clearing vehicles "working to clear the runway, but not the apron". The runway could be seen through the build-up of slush, although there was enough of it present for vehicles to leave tracks in it. They "did not see any build-up of snow on the aircraft" but it was de-iced with Type 1 fluid (the only type available at Pamplona) once the snow ceased temporarily. The route from the apron to the runway was approximately 300 metres and once the aircraft had been de-iced, the aircraft started taxiing slowly to the runway 33 threshold. This took about ﬁve minutes in a surface temperature of +1°C.

After take-off, icing conditions were present and at 1,500 feet aal, the aircraft entered cloud. The crew reported that "they had not delayed retracting the gear because they were penetrating the clouds and they thought it dangerous due to the terrain around the airport". It was noted that Air Nostrum did not have a speciﬁc procedure for operating at Pamplona in contaminated runway conditions and that there were also "operational limits on delaying gear retraction". The flight to Madrid was uneventful but on touchdown on runway 32L at Madrid, the crew were aware of "vibrations coming from the main gear which they initially identiﬁed as (attributable to a) blowout" and they therefore reported having minimised braking and asking TWR to arrange for a visual check of the condition of the gear. There were no problems with directional control during the landing roll or the subsequent taxiing but meanwhile, the crew of a nearby aircraft from another operator transmitted that "something was wrong with the left gear door" on the aircraft. After this, an airport marshaller attended and was able to conﬁrm that the No. 1 (outboard left) tyre had burst and so the crew asked TWR for a nearby parking stand. The surface temperature at Madrid at this time was +2°C.

Once parked, inspection by the crew confirmed this and also that the burst tyre "had a ﬂat spot before the blowout", that the No. 4 tyre (outboard right) had a ﬂat spot too and that "chunks of white ice" could be seen stuck to the brake assemblies. The blowout of the No 1 tyre had led to damage to the trailing edge of the inboard left flap and one of the flap fairings and caused the gear bay door to break off from its fittings.

A runway inspection was carried out and tyre debris and part of the gear door were found where the aircraft had touched down as well as several pieces of white ice further along. FDR data confirmed that the ILS approach at Madrid had been stable and the touchdown normal. The brakes were not applied until 7 seconds after the WOW sensor detected ground contact but "despite this, the number 1 and 4 wheels did not turn." When brake pressure was subsequently applied to all four wheels, the brake pressure recorded shown for No 1 wheel was higher than for the other three. 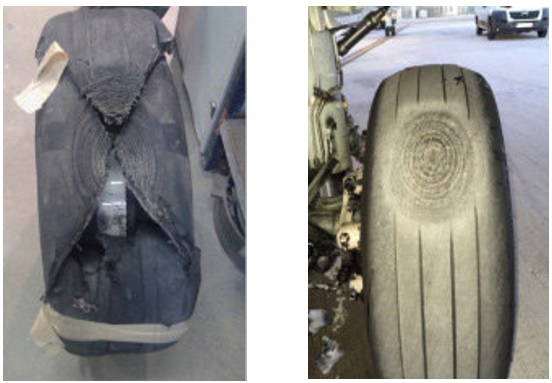 The condition of the No 1 (on the left) and No.4 (on the right) tyres. [Reproduced from the Official Report]

Debris found on the runway after landing. [Reproduced from the Official Report]

It was found that unlike other CRJ variants in the Air Nostrum fleet such as the CRJ 900, the CRJ 1000 was fitted with carbon brakes rather than steel ones. Appropriate information on the use of this type of brake unit rather than steel ones in winter weather was found to be included in the Air Nostrum Winter Operations Course which both pilots had taken prior to the beginning of the winter season 2014/15.

The FCOM was found to contain detailed information on adapting use of the brake system to cold weather and/or contaminated surface conditions including but not limited to the following:

When operating from wet, snow covered or slush covered runways or taxiways, or following overnight parking in known icing conditions, the following steps are applicable in order to prevent freezing of the wheel brakes:

It was found that clearance of frozen deposits from the runway at Pamplona had been completed about half an hour prior to the time the aircraft took off and that braking action at that time had been not less than 'medium' and the depth of contaminant not more than 12mm. It was also found that the way in which braking action was determined did not correspond to normal practice although no evidence was found that this had made a material difference to the figures obtained. However, it had continued to snow after this final intervention and measurement, initially in the form of "moderate snow" and it was considered that the elapsed time prior to take-off was "long enough for conditions to have changed significantly". It was also found that although no measurements had been taken, it had been observed that the depth of contaminant on the apron and on the taxi route to the runway had been greater than on the runway and that it had included "cordons of snow". It was noted that according to the AESA (regulatory) publication “Technical Instruction for Carrying out an Adverse Weather Plan”, flight operations must be suspended if the depth of slush exceeded 12.7mm.

At interview, both pilots "admitted that as pilots, they were more concerned about the possibility of ice on the wings than in the gear". They had asked how long it would take to clear the runway again and they were told 25 to 35 minutes so they had settled for a new braking performance test which was essentially unchanged from an earlier one. They stated that "they had not thought" to carry out the prescribed brake activations during the taxi out "since it would have required seven braking cycles from 20 knots down to 5 knots which was not feasible on a taxi run as short as the one at Pamplona". They admitted that they had been unaware of the porosity of carbon brakes and the implications of this characteristic.

The Investigation concluded that on the basis of all the available evidence the tyre damage on touchdown had definitely been caused by ice interfering with the normal operation of the brake units and that this ice had been formed from the frozen deposits accumulated on the main gear assemblies during departure from Pamplona.

Safety Issues needing to be addressed were highlighted by the Investigation and are summarised as follows:

Carbon brakes are more efficient at high temperatures, but are more prone to wear at cold temperatures. They are more porous than steel brakes and absorb moisture more readily when cold which means that that brake units using them are more susceptible to freezing after taxing/take-off/landing with frozen deposits present on the surface.

The weather conditions at Pamplona corresponded to those covered in both the aircraft manufacturer’s and aircraft operator’s procedures for cold weather and contaminated runway operations but the crew were apparently unfamiliar with them. Had they been familiar with them, they would have realised that they were unable to depart because of restrictions at the airport (short taxi distance and mountainous terrain).

The Pamplona Airport Winter Operations Plan was not properly followed. There were deficiencies in the application of its procedures as well as in the training provided to RFFS personnel required to measure movement area contaminants and clear accumulations of frozen deposits. The Investigation was not made aware of a satisfactory resolution to this situation.

The primary Cause of the event was formally stated as follows:

"Part of the slush encountered while taxiing and during the subsequent take-off run is thought to have made its way into the landing gear bays, adhering to the components there. When the gear was retracted, wheels number 1 and 4 were in a lower position and thus more exposed to low temperatures during the ﬂight. As a result, the slush deposited on the gear could have fallen due to gravity to the brake assemblies before freezing in place."

The Final Report was approved on 28 September 2016 and subsequently made available in English translation.