On 4 December 2003, the crew of a Dornier 228 approaching Bodø lost control of their aircraft after a lightning strike which temporarily blinded both pilots and damaged the aircraft such that the elevator was uncontrollable. After regaining partial pitch control using pitch trim, a second attempt at a landing resulted in a semi-controlled crash which seriously injured both pilots and damaged the aircraft beyond repair. The Investigation concluded that the energy in the lightning had probably exceeded certification resilience requirements and that up to 30% of the bonding wiring in the tail may have been defective before lightning struck.

On 4 December 2003, a Dornier 228-200 (LN-HTA) being operated by Kato Airline on a scheduled domestic passenger flight from Røst to Bodø in night Instrument Meteorological Conditions (IMC) was struck by lightning which temporarily blinded both pilots and caused damage such that the elevator control was no longer possible. Control of the aircraft was temporarily lost and it almost stalled, but eventually some pitch control was regained using pitch trim. After an unsuccessful first landing attempt, the second ended in a crash landing which seriously injured both pilots and damaged the aircraft beyond repair. The two passengers sustained only minor injuries. By the time of the landing attempts, daylight clear of low cloud prevailed.

An Investigation was carried out by the Norwegian Accident Investigation Board. FDR and CVR data were successfully recovered, the latter covering 45 minutes which meant that data from both sources covered the period before and after the lightning strike. ATC radar and voice recordings were also available.

It was established that as the aircraft approached Bodø with the First Officer as PF, with heavy showers in the area and with the crew aware that a DHC8 in the same area had reported taking a "powerful lightning strike" a few minutes earlier, the aircraft had been struck by "a very powerful lightning strike" whilst in night IMC at 5900 feet QNH about 10nm east of the airport.

The crew reported that they had both been temporarily "completely blinded" and that it had been "30 seconds before their vision gradually began to return". During this time, the aircraft had slowly lost altitude and on recovery, the crew realised that the elevator was not working normally. They had then increased engine power which resulted in a rapid climb at up to 4000 fpm and a rapid decease in airspeed almost to the point of stall. FDR data showed that 80 seconds after the strike, "the aircraft was close to stalling, the airspeed had fallen to its lowest value of 66 KIAS and the aircraft had stopped climbing at an altitude of 7,800 ft". It was noted that the single engine Vmca for the aircraft was 81 KIAS. The Captain took control and used engine power and pitch trim to increase the airspeed to a safe level as "the aircraft continued its unwanted climb to 9000 feet".

ATC had observed the divergence from cleared altitude and advised that there was no other traffic in the area. The crew declared an emergency having advised that they were having to rely on pitch trim to control attitude because control of the elevator through the control column was not possible. Radar vectors and descent clearance were provided towards runway 25 and sixteen minutes after the strike, in the descent to 2500 feet with no other significant issues appearing to have resulted from it, visual reference with the airport in what was now daylight was gained at a range of 7nm and landing clearance was issued.

The attempt at a landing with only limited ability to control vertical speed resulted in a sudden final descent, a hard runway three point contact with the runway and a bounce from which it was decided that a go around was the safest option. A left hand circuit was flown and the aircraft established again on final with the surface wind velocity reported as 230º / 27 knots. FDR data showed that during the final 30 seconds of the approach, airspeed had varied between 99 and 123 knots before dropping to 101 knots just before an 8.4 g impact with the ground 22 metres prior to the threshold of the 2794 metre runway LDA in a virtually level attitude. The equivalent ground speed at impact was approximately 78 knots. The aircraft then slid for a distance of 78 metres before stopping with the "landing gear broken off, its belly forced up and the wing pressed down into the cabin" but there was no leak of fuel or any fire. It was reported that "the powerful impact rendered both pilots unconscious for a short period" and that "when they came round, the rescue services were outside the window". The pilots were able to evacuate the aircraft using the left cockpit door and the two passengers did so using the right emergency exit from the cabin. 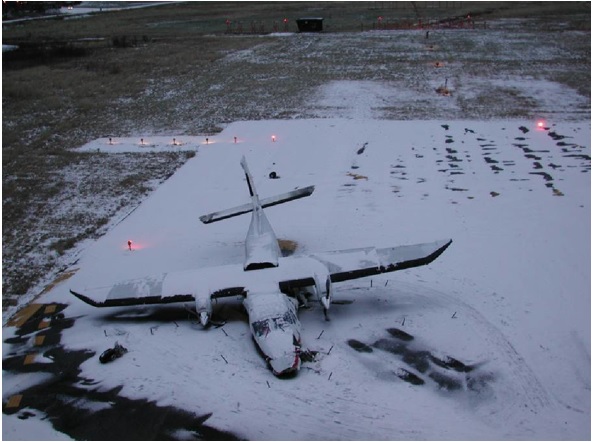 It was noted that the aircraft had been equipped with (colour) weather radar but that the available evidence indicated that the pilots had been unable to get a useful display on it shortly before the lightning strike and that there appeared to have been previous problems with both its reliability and, potentially, also with the extent of understanding of its use by the operator’s pilots. Under JAR-OPS 1.670, it was noted that such equipment was a requirement for aircraft of the size of a D228 if operated at night or in IMC "in areas where potentially hazardous weather conditions, regarded as detectable with airborne radar, may be expected to exist along the route". The Kato Operations Manual was found to state that in the event that the weather radar was unserviceable (it was not recorded as such prior to the commencement of the accident flight) "heavy showers (CB) should be avoided (min. distance 10 NM)". This Manual was also found to recommend "switching the cockpit lighting on full and using the sun visor tominimize the effect of dazzling lightning".

The ability of Bodø ATC to gain awareness of weather from their radar displays and thus be able to assist pilots without such capability was found to be poor and to have "deteriorated after the last primary surveillance radar upgrade" such that it did not "correspond well with what the pilots experience or see on their weather radar". The only weather presentation available to controllers was 15 minutes behind real time and provided on a discrete display using an internet connection.

On an initial examination of the wreckage the day after the accident it was found that the loss of elevator control had been due to loss of integrity of one of the control rods which linked the control column to the elevator - specifically at the end of the one connected to the elevator - and that the evidence indicated that this had occurred during the propagation of the lightning strike energy from its frontal entry longitudinally through the aircraft to its exit at the tail.

Based on the altitude of the aircraft at the time of the strike, the Investigation considered that intra-cloud lightning had been the source of the strike and based on inspection of the wreckage that entry had been at the left-hand baggage door, possibly in two places. It was concluded that the current had then probably followed two paths before leaving the aircraft via the tip of the right elevator:

Calculations made for the Investigation suggested that "the total amount of energy in the lightning exceeded the values in the model produced by EUROCAE WG31" specialists for aircraft type certification purposes - there was "no sign that the end of the elevator rod had not been sufficiently tightened or that insufficient threads in the adjustable end were in contact with the rod".

Also, the condition of the static discharge bonding wires prior to the strike could not be "established with any certainty". Further specialist work conducted for the Investigation indicated that "approximately 30%" of the bonding wires may have sustained mechanical damage prior to the strike and that there had also been considerable prior corrosion of the wires. The combined effect of this would have had "a negative effect on the.....conductivity of the bondings". It was noted that the maintenance requirements of the aircraft manufacturer in respect of bonding wires were not specific, leaving inspection dependent on "generally accepted inspection criteria". 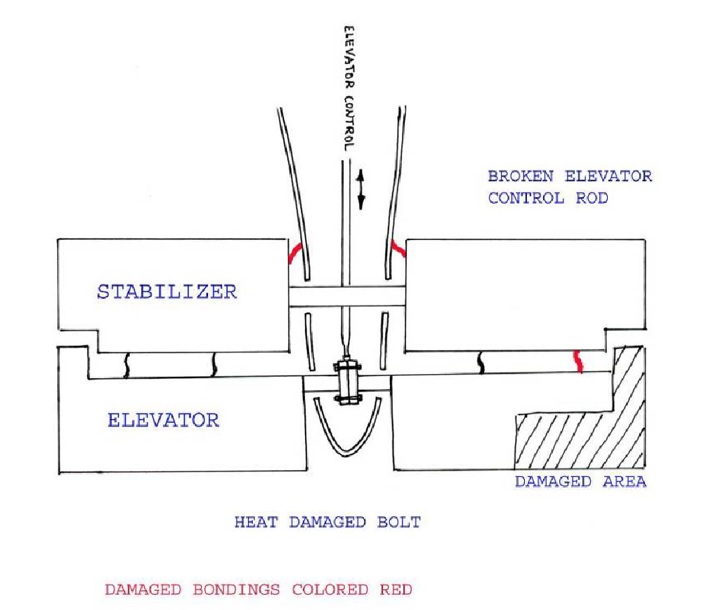 The Investigation considered that:

The Final Report of the Investigation was completed on 29 June 2007.