On 28 September 2012, control of a Sita Air Dornier 228 being flown by an experienced pilot was lost at approximately 100 feet aal after take off from Kathmandu in benign daylight weather conditions and the aircraft stalled without obvious attempt at recovery before impacting the ground where a fire broke out. All occupants were killed and the aircraft was destroyed. The comprehensive investigation found that insufficient engine thrust was being delivered to sustain flight but, having eliminated engine bird ingestion and aircraft loading issues, was unable to establish any environmental, airworthiness or loading issue which might have caused this.

On 28 September 2012, a Dornier 228-200 being operated by Sita Air on a domestic scheduled passenger flight from Kathmandu to Lukla failed to sustain its initial climb after take off in day Visual Meteorological Conditions (VMC) and having reached a maximum height of about 100 feet aal, it entered a stall from which recovery was not achieved before ground impact and subsequent fire which led to the death of all 19 occupants and the destruction of the aircraft.

An Investigation was carried out by an Aircraft Accident Investigation Commission appointed by the Nepalese Government. The Flight Data Recorder (FDR) and Cockpit Voice Recorder (CVR) were recovered and downloaded but some FDR information was missing because it relied on sensors external to the recorder which had been disabled by the effects of the impact and fire. The CVR recording was used undertake Spectrum analysis of the CAM channel to analyse the sound of each engine as an “audio signature” and to identify the incidence of other noises, including one which corresponded with a ‘flash’ captured on CCTV appearing to come from one of the engines shortly before the aircraft became airborne.

With the type-experienced aircraft commander acting as PF and accompanied by an inexperienced but correctly qualified co pilot, the aircraft made an intersection take off from the 3050 metre long runway 20 which provided an available runway length of 2112 metres. The aircraft accelerated normally until approximately 70 knots - well below the applicable V1/Rotation Speed (Vr) speed of 83 knots. At this speed, at about the same time as the aircraft hit a Black Kite (which would have had an estimated live weight of around 700 grams), a wrong call of “V1 Rotate” by the co pilot was followed by a brief but unsuccessful attempt to rotate the aircraft. The entire carcass of the bird was subsequently recovered from the runway and the Investigation found no evidence of any bird remains in either engine. Continued acceleration on the ground above 70 knots was less than normal but just before the aircraft became airborne, a small ‘bang’ or ‘thud’ can be heard on the CVR CAM channel which corresponds to the signatures associated with the engine rotation rate of one of the engines dropping by approximately 4% before recovering. At approximately 86 knots, which was above the applicable V1, Vr and V2, the aircraft had become airborne and began to climb away.

The Investigation found that CVR audio signatures associated with the right engine had remained constant at 100% while the aircraft remained airborne but those for the left engine dropped to 95% of their nominal frequencies just after the landing gear was raised, and dropped further to 91% shortly afterwards. The aircraft reached a speed of 89 knots in the two seconds after becoming airborne but speed then dropped to 77 knots as it climbed to 100 feet aal. At this point, there was no longer sufficient thrust from the engines to overcome the drag of the aircraft and further speed loss continued as the aircraft drifted to the left of the runway centreline until successive stall warnings were activated and it then stalled from a left turn and, having departed controlled flight, impacted the ground in an extreme nose-low attitude. It was established that both engines had been operating and delivering low or flight idle power at the point of impact and that the propellers had not been feathered.

The Investigation established that when the engines of the accident aircraft had been installed, the mandatory Aircraft Maintenance Manual check of Flight Idle fuel flow with the Speed Lever set to low during an engine ground run had not met the minimum permissible figure of 96.5 ±0.5%. Instead, the recorded figure had been 90%, within the Operator's own engine ground run performance check requirement for the flight idle fuel flow check to result in an engine rpm of “approximately 88%”. It was also found that there was no record of any airborne flight idle fuel flow check having been carried out by the operator in accordance with the procedure detailed in the Pilots Operating Handbook (POH). It was noted that “this lower than required rpm would result in a lower than required fuel flow rate which would result in higher drag from an engine at flight idle” and that “it could also result in the in-flight flight idle rpm dropping below 100% rpm with the Speed Lever remaining in high”. However, it was not possible to determine the potential effect of this on the trajectory of the accident aircraft. 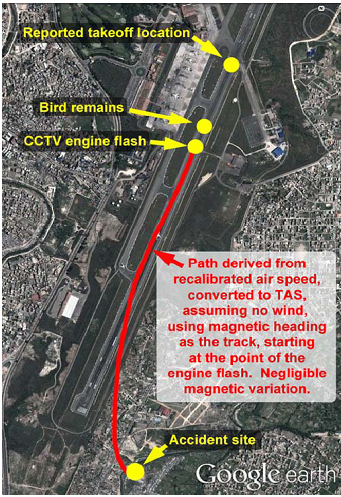 It was found that pilot training in aircraft handling, including loss of engine power and asymmetric flight, was carried out on the aircraft rather than in full flight simulator, so that control of an aircraft near V1 on the ground or at low altitude after take off could not be practised.

The actual take off weight of the aircraft was calculated, using standard passenger weights, to have been 5914 kg whereas the load and trim sheet completed and accepted prior to the flight showed 5834 kg, just within the RTOW for the flight of 5,836 kg - less than the 6200 kg MTOW for the aircraft because of the effect of density altitude on aircraft performance due to Kathmandu airport being at an altitude of 4390 feet amsl. However, after comparing the actual climb performance of the aircraft with that achieved, the Investigation was satisfied that “overloading alone was not the cause of the lack of performance in the climb phase”. Also, whilst it was found that the trim sheet for the flight had recorded incorrect positions for the aircraft centre of gravity, it was established that this had not resulted in an out-of-trim condition.

It was noted that the response of the airport Rescue and Fire Fighting Services to the crash site was delayed because “Army personnel were blocking the route to the exit and personnel manning the exit required permission to unlock the gates to let the fire vehicles pass”. It was also noted that “once on public roads, the vehicles were delayed further by the weight of traffic and a crowd of people near the impact site”.

The Investigation was unable to determine the cause of the low power which led to the loss of control but did identify the following Causal Factors:

In addition the following Contributory Factors were also identified:

A total of fifteen Safety Recommendations were issued as a result of the findings of the Investigation all aimed at supporting a general improvement in the safety regulation and management of aviation in Nepal.

Three Interim Recommendations were issued on 29 November 2012 as follows:

A further twelve Recommendations were made at the conclusion of the Investigation as follows:

The Final Report of the Investigation was made available in August 2013.