On 2 June 2012, a Dornier 328 and a commercially-operated Robinson R44 helicopter came into close proximity within the airport perimeter whilst both were departing from Bern in VMC as cleared. The Investigation attributed the conflict to inappropriate issue of clearances by the controller in a context of an absence of both a defined final approach and take off area and fixed departure routes to the three designated departure points.

On 2 June 2012, a Dornier 328-100 (HB-AES) being operated by SkyWork Airlines on a scheduled passenger flight from Bern to Belgrade as SRK700 and taking off from Bern in normal day visibility came very close to colliding with a Robinson R44 helicopter (HB-ZSA) being operated by locally-based helicopter charter and pilot training company Mountainflyers 80 which had been cleared to hover taxi in the opposite direction parallel to the runway prior to departure on a Visual Flight Rules (VFR) sightseeing flight from and returning to Bern.

An Investigation was carried out by the Swiss Accident Investigation Board (SAIB). Recorded data relevant to the Investigation was recovered from the Do328 DFDR but the aircraft Cockpit Voice Recorder (CVR) had been overwritten during the subsequent flight as had the data on the helicopter Global Positioning System (GPS) equipment. No radar recordings were available. It was noted that weather conditions were good and had played no part in the conflict and that the airspace involved was designated as Class 'D'.

It was established that the Dornier, with the First Officer as PF, had received taxi clearance from TWR to follow parallel taxiway 'K' to wait on 'F' for a runway 32 departure (see diagram below) It was subsequently cleared to enter the runway at 'F' behind a departing DHC8 and to backtrack and line up. Another aircraft (a Helvetic Airways FOKKER F100, identified on the diagram as 'OAW980') also called for taxi at this time and was cleared in the opposite direction along taxiway 'K' to wait at 'C'. Soon after it reached there and stopped, the helicopter pilot, who was intending to undertake a local sightseeing flight and had two passengers on board, called TWR to say that he was on Helipad 1 and requested an ‘around the tower’ departure. The response was an immediate instruction "departure approved own discretion" via taxiway KILO ‘around the tower’ in the direction of the departure point HOTEL. The presence of the F100 on 'K' was not mentioned. The controller reporter seeing the helicopter lift off soon afterwards hover backwards onto 'K' before proceeding towards the stationary F100 "at an estimated speed of 50 knots". On approaching the F100, the helicopter turned right and flew around it before turning back towards 'K'.

Approximately one minute after giving a departure clearance to the helicopter, the same controller cleared the Dornier for takeoff. As the helicopter turned left to regain 'K', it overshot which put it on a converging track with the (unseen) Dornier. Before the TWR controller was able to give an avoiding action instruction, it had already turned away to the right. The crew of the Dornier reported having noticed the helicopter as their aircraft was accelerating through "60 to 80 knots" during its take-off roll. They saw that it was "on the right, on a trajectory which was slowly converging with the centre line of runway 32". According to the aircraft commander’s recollections, his aircraft had overtaken the helicopter at approximately the same altitude just before passing taxiway 'B' at which point, the helicopter had just begun to turn right

After considering all the evidence, the Investigation came to the conclusion that the lateral distance between the two aircraft at their closest point of approach was "approximately 80 to 100 metres" when at the same altitude. 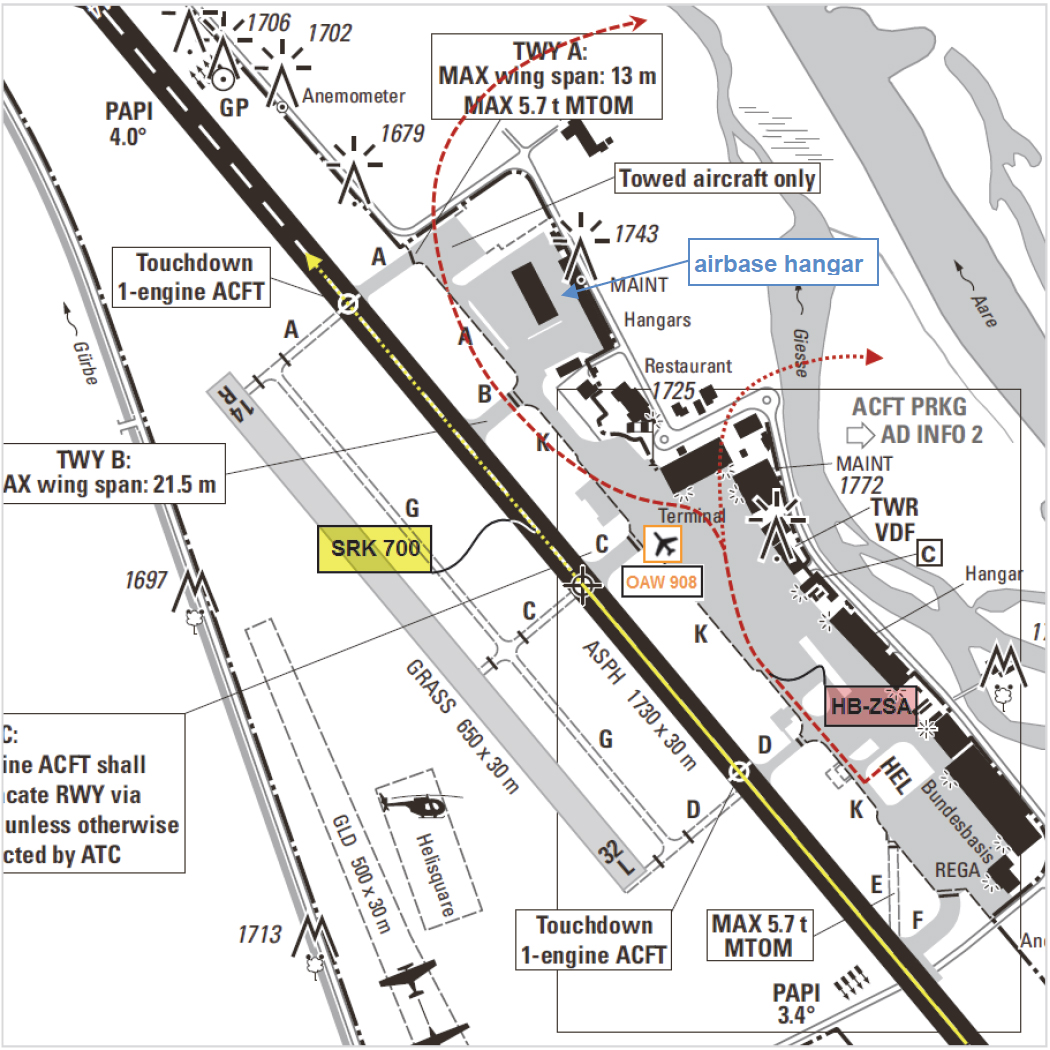 The approximate actual tracks of the helicopter (broken red line) and the Do228 (yellow line). The controller's expectation of the helicopter's track is shown as a dotted red line (reproduced from the Official Report)

It was concluded by the Investigation that "the tight spatial conditions of taxiway 'K' which was used by fixed-wing aircraft to taxi to runway 32, and which was used in the opposite direction as an unobstructed departure area for helicopters of little mass, plus the simultaneous use of runway 32 which runs in parallel with it, for take-offs and landings at only short lateral distance are part of an operating concept which is not error-tolerant and is inappropriate, and contributed to the occurrence of the serious incident".

It was noted that the AIPs entry for Bern did not include a documented departure route from the helipad to point HOTEL or the other two helicopter designated helicopter reporting points and that "the departure route 'around the tower' used when there were north-westerly winds, was not prescribed or published" despite its use being "common practice" for locally based pilots. It was concluded that "the absence of mandatory departure routes from the helipads to departure points….. contributed to the dangerous convergence of the two aircraft and therefore to the occurrence of the serious incident."

The Investigation determined that the Cause of the conflict was "that aerodrome control cleared a commercial aircraft to take off on runway 32 without ascertaining the position of the helicopter which the controller had shortly beforehand cleared to depart at its own discretion (with) the result…that a dangerous convergence of these two aircraft occurred with a high risk of collision."

The Investigation also concluded that "the checklists for operation of the Dornier 328-100 commercial aircraft unnecessarily occupy crews’ attention, because the latter have to perform checklist points whilst taxiing which could be carried out before taxiing" and that whilst it was neither causal nor contributory, it constituted a "Risk Factor".

Safety Action taken as a result of the accident findings was noted to have included the submission by the airport owner to the Federal Office of Civil Aviation (FOCA) on 13 December 2013 of new visual approach chart which included the 'round the tower' route.

The Final Report was completed on 21 January 2014 and approved by the Swiss Accident Investigation Board SAIB on 9 September 2014. ICAO AIRPROX Category 'A' was assigned.