On 26 January 2017, an EASA Test Pilot carrying out certification test flying to extend the Dornier 328's maximum demonstrated crosswind was unable to retain control during an intended full stop landing on runway 09 at Sumburgh and it departed the side of the runway onto soft ground and stopped abruptly. The Investigation noted the Test Pilot's total type experience was the three circuits immediately prior to the excursion and attributed it to inappropriate flight control inputs and power lever movements. Intervention on the power levers by the aircraft commander had not been enough to prevent the excursion.

On 26 January 2017, a Dornier 328 (D-CTRJ) being operated by 328 Support Services out of Sumburgh on a certification test flight with an EASA Test Pilot flying the aircraft departed the right hand side of runway 09 during an attempted crosswind landing in normal daylight visibility with a crosswind from the right. It was observed to come quickly to a stop in soft ground once it had left the runway and was undamaged, and the four occupants were uninjured. 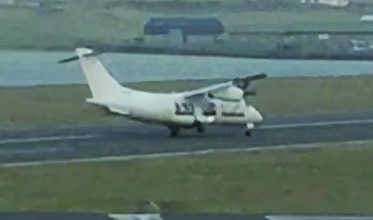 The right main landing gear lifting off the runway soon after touchdown. [Reproduced from the Official Report]

An Investigation was carried out by the UK AAIB with the assistance of downloaded recorded flight data. It was found that the 64 year-old aircraft Captain had accumulated 10,379 total flying hours which included 4,035 hours on type. The EASA Test Pilot, who was acting as PF and occupying the left hand pilot seat, had only 30 minutes type experience, all obtained during the circuit flying detail which culminated in the excursion.

It was established that earlier in the same flight, the Test Pilot had made three successful flap 20 full stop landings on the same runway at Sumburgh but that the excursion had occurred during an attempt to land with flap 32 set. It was found that wind conditions had remained broadly unchanged whilst all four landings were taking place with the wind being reported as from 160° at 24 knots gusting to a maximum of 36 knots. Whilst the aircraft was on short final during the excursion approach, ATC had passed a two-minute average wind of 160° at 26 knots.

A combination of the reports from both pilots and FDR data established that the aircraft had touched down slightly to the left of the runway centreline after which the PF had selected Ground ldle power, almost immediately applied to aileron approximately 14° deflection in the right wing down (into wind) sense and progressively applied left rudder. However, when this did not keep the aircraft on the centreline, he reported having applying left brake but also inadvertently relaxing his aileron input to the extent that the into wind right wing down deflection became a downwind left wing down deflection. At this point, as the photograph above shows, the right wing lifted and the right main landing gear lifted off the runway – FDR data showed that the left wing down aileron deflection reached 11° over a period of 5½ seconds. The PF reported that "thinking that this was due to his brake application, (he had) ceased differential braking and re-applied right aileron (and) the bank angle reduced and the right main wheel touched down again". Then, "thinking that he had applied reverse thrust and that this might have reduced rudder effectiveness”, he had moved the power levers forward to what he thought would be the Ground Idle position but actually, he had in doing this set the power levers to flight idle. The PM immediately intervened to return the power levers back to the Ground Idle position and continued through this to the full reverse pitch position.

The result of these actions was that although full left rudder was held, the intervention of the aircraft commander did not prevent the aircraft continuing to track to the right and it left the runway at about 25 knots and, upon immediately encountering soft ground, came quickly to an abrupt stop. It was noted that FDR parameters did not include use of the nosewheel steering system although "data from the nose landing gear weight-on-wheels switch […] suggested that nosewheel steering did not engage after touchdown except for brief periods".

It was concluded that the origin of the excursion was the unintended inappropriate reversal of the initial aileron deflection and the inappropriate increase in power to flight idle which created a situation in which there was "insufficient directional control in the strong crosswind conditions to prevent the aircraft from leaving the runway" with the only intermittent engagement of nosewheel steering during the landing roll "contributing to the handling difficulties".

The Final Report of the Investigation was published on 14 September 2017.