On 28 October 2017 the left main landing gear of an MD10-10F that had just touched down at Fort Lauderdale collapsed which led to the aircraft departing the side of the runway and catching fire. The Investigation found that the collapse had occurred because of metal fatigue which had developed in the absence of protective plating on part of the leg assembly. The reason for this could not be determined but it was noted that had the aircraft operator’s component overhaul interval not been longer than the corresponding manufacturer recommendation then the collapse would probably not have occurred.

On 28 October 2017 a McDonnell Douglas MD10-10F (N370FR) being operated by FedEx Express on a cargo flight from Memphis to Fort Lauderdale as FDX 910 had just touched down normally at Fort Lauderdale in day VMC when the left main landing gear collapsed and the aircraft departed the left side of the runway. Prior to the flight crew being able to evacuate the aircraft, a fuel fed fire started and the left wing exploded. The aircraft sustained substantial damage but both pilots were subsequently able to evacuate with minor injuries to one of them. 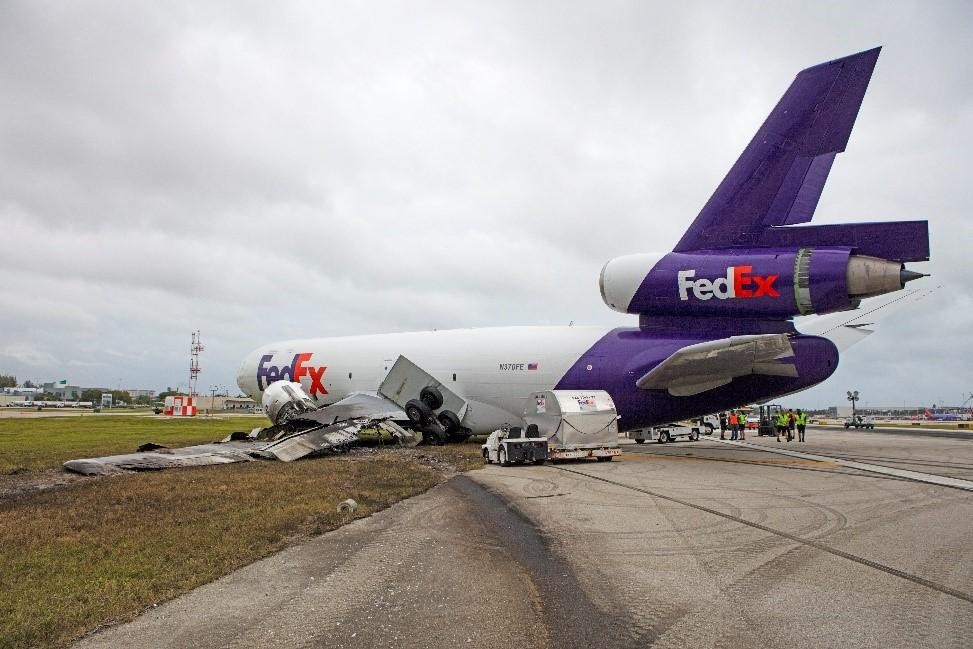 The aircraft after the explosion had occurred and the fire had been extinguished. [Reproduced from the Official Report]

An Investigation was carried out by the NTSB. Relevant data from the solid state FDR and the CVFDR (Combined Voice and Flight Data Recorder) were successfully downloaded and were of assistance to the Investigation.

It was established that with the First Officer as PF, the flight had proceeded normally to an ILS approach to the 2743 metre-long runway 10L at destination. The approach was stable and made with 35° flap set for landing. The AP was disconnected as the aircraft was passing 1000 feet agl and the A/T was disconnected as it passed 100 feet agl. At 50 feet agl, the First Officer initiated the flare and main gear touchdown subsequently occurred in the TDZ (Touch Down Zone) and to the left of the runway centreline with the Nose Landing Gear following three seconds later. Ground spoilers were deployed followed by the thrust reversers and CVR data recorded the Captain instructing the First Officer to begin braking (the aircraft did not have autobrakes) ten seconds after main gear touchdown.

An airport video recording of the landing showed that after the number 1 engine had initially supported the left side of the aircraft after the left MLG had collapsed, a fire began near the left wingtip whilst the aircraft was still moving. It eventually came to a stop off the left side of the runway between 30º and 40º off the runway heading near the A4 taxiway. The pilots began running the evacuation checklist and stated that just as they were about to evacuate, there was an explosion. The airport video showed that this had been accompanied by a ‘fireball’ erupting at the number 1 engine that reached more than 150 feet into the air with debris from the explosion above this. The Captain reported attempting to discharge a fire bottle in that engine but it did not work and they then both evacuated through the right cockpit window.

The full width of the left wing was seriously fire-damaged outboard of the number 1 engine pylon and the bottom of the left wing fuel tank was found to have sustained structural damage during the accident sequence. The explosion was found to have been initiated by fuel which was leaking from a broken supply line in the left engine pylon which had ignited and then spread over the exterior surfaces of the almost empty wing fuel tank. Other damage to the aircraft was variously attributed to either or both structural damage due to the initial impact and damage caused by the subsequent fire and explosion.

The outer cylinder of the left MLG shock strut was found to have fractured around its entire circumference with the upper part of the cylinder remaining intact and attached to the aircraft (see the illustration below). 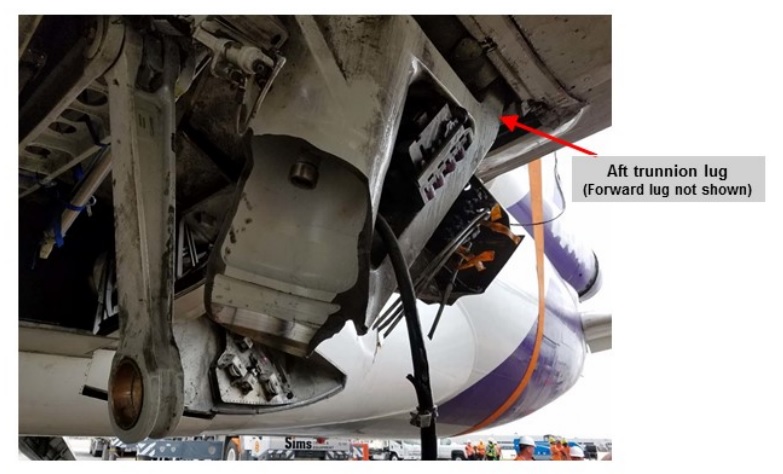 The top part of the left MLG leg still attached to the aircraft. [Reproduced from the Official Report]

The fracture occurred midway through the air filler valve bore on the aft side (see the second composite illustration below) and on-site examination identified features consistent with fatigue on the fracture surface. Metallurgical examination of a detached fragment of this cylinder and the corresponding fracture region on the largest piece of the MLG found indications consistent with an overstress fracture having originated from a pre-existing crack in the air filler valve bore. Features consistent with mixed mode fatigue, overstress, and intergranular fracture were found to be associated with propagation of the initial crack. These findings confirmed that once the crack had reached a critical length, the left MLG cylinder had fractured in overstress due to the loads imposed during landing. 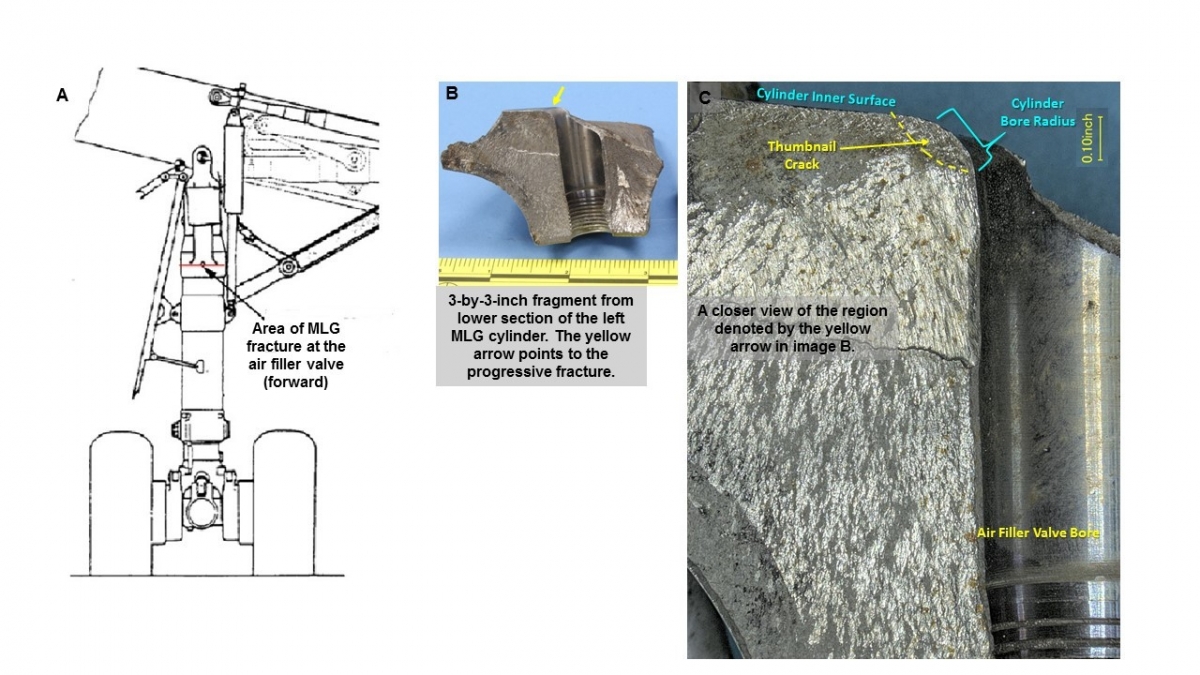 The location of the MLG fracture (A), the 3˝ x 3˝ fragment from the detached lower section of the MLG cylinder (B), and close-up view of the region highlighted in image B (C) [Reproduced from the Official Report]

The most prominent feature of the crack initiation site was consistent with a corrosion pit with no indications of protective nickel, chrome, or cadmium plating at the radius or along the smooth sections of the air filler valve bore. Such plating is stipulated by maintenance instructions and its absence over time would have been conducive to corrosion pitting of the type found. It was noted that once corrosion pitting (or mechanical damage to the protective coating during maintenance) has occurred, the risk of fatigue cracking is significantly raised.

The most recent overhaul of the left MLG was found to have been in 2008 and had involved an ASB-mandated inspection of the air filler valve bore and a corrosion repair on the accident cylinder which included brush cadmium plating. This ASB had been issued in response to another FedEx MD10-10F MLG collapse which had occurred in 2006. It was not possible establish what had happened to the cadmium plating on the assembly being investigated and noted that there was no way to effectively inspect this area during routine maintenance activities.

It was found that the manufacturer-recommended overhaul interval for the MLG assembly is 8 years or 7,500 flight cycles, whichever comes first whereas at the time of the accident, the corresponding FedEx interval was 9 years or 30,000 flight hours, whichever comes first. This scheme meant that the failed cylinder was a maximum of 152 days away from its next overhaul. FedEx “produced no documentation or data analysis supporting the longer overhaul interval”.

The NTSB observed that “if FedEx had not adopted an overhaul limit that exceeded the manufacturer's recommendation, the fatigue crack in the accident MLG cylinder, which was last overhauled 8½ years before the accident, likely would have been detected and addressed before it could progress to failure”.

The Investigation determined that the Probable Cause of the accident was “the failure of the left main landing gear (MLG) due to fatigue cracking that initiated at a corrosion pit [which] formed in the absence of a required protective cadmium coating the cause of which could not be determined from available evidence”.

A Contributory Factor to the failure of the left MLG was also identified as “the operator's overhaul limit, which exceeded that recommended by the airplane manufacturer without sufficient data and analysis to ensure crack detection before it progressed to failure”.

Safety Action taken as a result of the findings of the Investigation was noted as having included the following:

The Final Report was published on 23 August 2018. No Safety Recommendations were made.