On 9 November 2005, a McDonnell Douglas DC10-30F almost failed to get airborne before the end of the runway on a night takeoff from Macau and its main landing gear then hit lighting and ILS equipment as it climbed at a very shallow angle. After flight, two wheel changes were required due to tyre damage. The Investigation was hindered by the failure of the State of the Operator to assist the Investigation but concluded that the aircraft had been correctly loaded and that the extended take off roll had been due to use of the wrong flap setting.

Description On 9 November 2005, a McDonnell Douglas DC10-30F (N614GC) being operated by the Peruvian company Cielos Airlines for Qatar Airways on a cargo flight from Macau to Karachi as QTR 8505 almost failed to get airborne in night VMC before reaching the end of runway 34 at Macau and a very shallow angle of climb was then observed. Damage to both the aircraft and fixed lighting and navigation equipment at and near the takeoff end of the runway was subsequently discovered. The aircraft completed its 6½ hour flight to Karachi without further event.

The Macau Civil Aviation Authority (AACM) assessed the event to be a Serious Incident and therefore carried out an Investigation. There was no response to a formal request for assistance from the Peruvian DGAC as the relevant contact at the State of the Operator and issuer of the carrier’s AOC and in the absence of such co-operation, the AACM had no access to information from the FDR or about the flight crew involved. It was noted that the aircraft involved had been wet leased to Qatar Airways under an approval issued by the Qatar CAA.

It was established that the intended departure of the flight had been delayed by 1½ hours because of a delay in loading cargo. The aircraft operator subsequently stated that the departure was originally planned to be from runway 16 with a flap setting of 17° but the eventual departure was made from runway 34 with a 14° flap setting. The recorded surface temperature at the time of takeoff was 25° C. Take off with a recorded surface wind velocity of 140°/07 knots meant that there was a tail wind component of approximately 5 knots. The aircraft was observed to use almost the full length of the 3360 metres long runway for its takeoff roll and to become airborne “barely clear of the end of the runway”. Thereafter the flight path followed was seen to involve a climb angle which was “very flat”. It was noted that runway 34 is the preferred runway provided that - as in this case - any tailwind component (actual and/or forecasted) is not greater than 10 knots.

Almost immediately after the aircraft had become airborne, the alarm on the remote monitoring system for the localiser component of the ILS equipment on the 17 approach was activated and the system was automatically shut down. The maintenance team subsequently found that one of the elevated approach lights near to the field monitor antenna of the ILS localiser, the field monitor itself and one of the antenna elements of the ILS localiser and its associated red obstacle lighting had been damaged by impact. Their wreckage was distributed beyond the end of Runway 34, on the adjacent service road and just over the sea wall beyond the end of the runway. The location of the damaged installations relative to the end of the runway is shown on the illustration below. No debris was found on the runway itself. 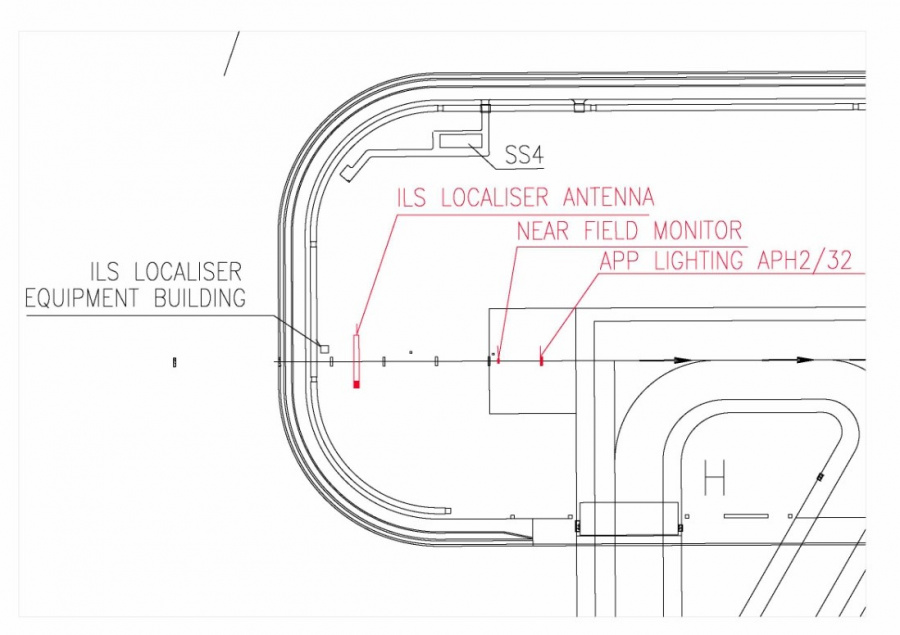 The location of the three elements of damaged ground equipment (in red). [Reproduced from the Official Report] 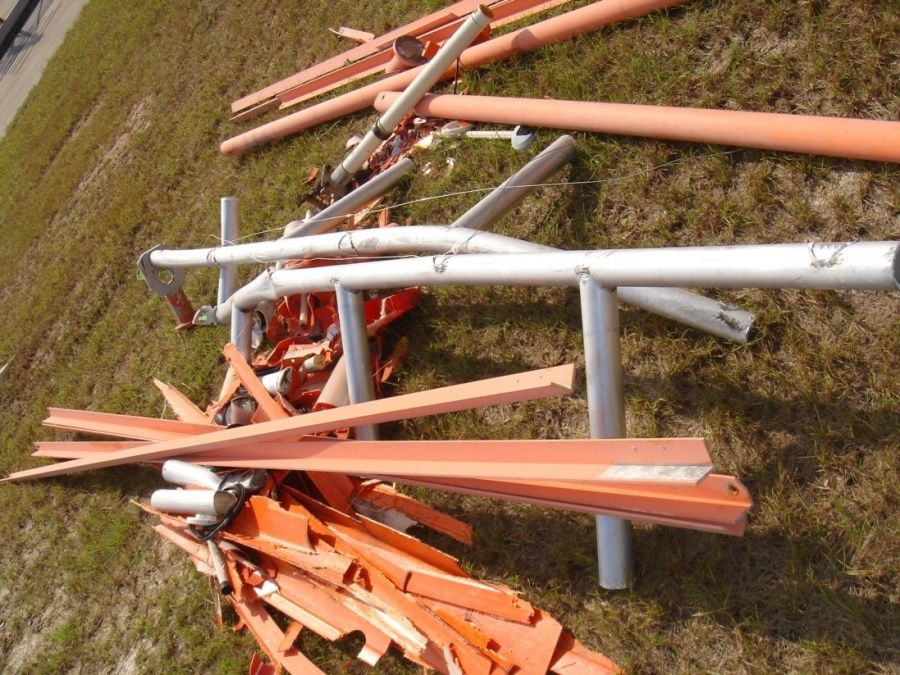 Wreckage of the impacted ILS Localiser components. [Reproduced from the Official Report]

The TWR Supervisor contacted the en-route ATC frequency to which the aircraft had been transferred and requested that the DC10 flight crew be informed that as it was suspected that it had damaged the localiser antenna because of its attitude during initial climb, it would be necessary to check the aircraft for damage.

According to information subsequently provided by the aircraft operator, the only damage found to the aircraft during a post-flight inspection in Karachi by inspectors from the Pakistan CAA was cuts to both outer left side main gear tyres neither of which was considered by the operator to have compromised the pressure holding capabilities of the tyres concerned. The aircraft was released to service after the corresponding wheels had been changed. 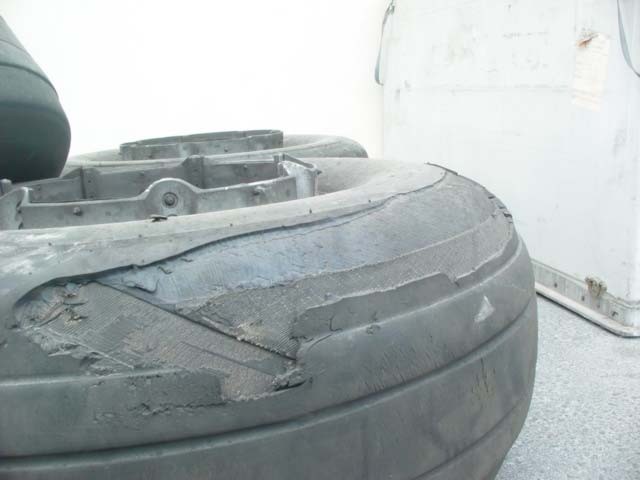 Damage to the forward left tyre of the left main landing gear of the aircraft. [Reproduced from the Official Report]

According to information provided to the Investigation by Cielos Airlines, the actual takeoff weight from Macau was 247 tonnes, which was within the MTWA of 260 tonnes and the actual zero fuel weight (ZFW) of 172 tonnes was within the MZFW of 182 tonnes and “the aircraft was properly loaded and trimmed correctly”. It was also advised that 74 tonnes of fuel was on board for departure which corresponded to the operational flight plan requirement. The landing at Karachi occurred at a weight of 185 tonnes, within the applicable MLW of 190 tonnes. It was noted that the departure weights were within aircraft limits for the conditions prevailing at Macau at the time. The aircraft operator also stated that all cargo on board the aircraft had been re-weighed after arrival at Karachi and found to have been correctly recorded prior to the flight.

The formally-documented Findings of the Investigation included, but were not limited to, the following:

It was also found that, subject to the caveat that full and/or verified information had not been available, Unconfirmed Findings including the following were also documented:

The Cause of the Serious Incident was determined to have been “the degraded performance of the aircraft which was translated into a longer takeoff roll distance due to an incorrect flap setting (14 degrees) for the tail wind condition (140/07 knots)”.

A Contributory Factor was also identified as being that “the flight crew had not been provided with sufficient technical and guidance information nor were they adequately trained to apply the correct flap setting for takeoff”.

The Final Report was completed in February 2009 and subsequently made available online. Note that the available copy of this Report does not include its 12 Appendices, just a listing of their titles.