On 19 July 1989, a GE CF6-6D-powered Douglas DC-10-10 at FL370 suffered a sudden explosive failure of the tail-mounted number 2 engine and a complete loss of hydraulics so that the aircraft could only be controlled by varying thrust on the remaining two engines. With only limited flightpath control, the subsequent Sioux City emergency landing led to the destruction of the aircraft by impact and fire. The Investigation attributed the engine failure to non-identification of a fan disc fatigue crack arising from a manufacturing defect and the loss of hydraulics to debris dispersal which had exceeded the system s certification protection.

On 19 July 1989, a Douglas DC-10-10 (N1819U) being operated by United Airlines on a scheduled domestic passenger flight from Denver to Chicago O’Hare was in the cruise at FL370 in day VMC when about an hour after takeoff, a loud explosion was heard and it was apparent that the number 2 (tail-mounted) engine had failed. It was soon clear that there had been a complete failure of hydraulic power, which resulted in the inability to operate any of the primary flight control surfaces. An emergency was declared and radar vectors to Sioux City offered by ATC and accepted. With the assistance of an off duty DC-10 Training Captain who managed to control the flight path by manipulating the thrust on engines 1 and 3, the aircraft was able to approach a runway at Sioux City on which an emergency landing was attempted. Soon after the right main gear and wingtip contacted the only practicable (but officially closed) runway, the aircraft rolled inverted and was progressively destroyed by the impact and fire. 111 of the 296 occupants were killed, 47 sustained serious injuries, 125 sustained minor injuries and 13 were uninjured.

An Investigation into the accident was carried out by the NTSB. Both flight recorders were recovered from the wreckage. The CVR data covered the final 33½ minutes of the flight beginning about 10 minutes after the number 2 engine failed. The FDR was undamaged with no evidence of excessive damage and it was found to contain a full 25 hours of recorded data. However, although the quality of the data recording was generally good, there were some anomalies in the data. Available parameters included altitude, indicated airspeed, heading, pitch attitude, roll attitude, stabiliser position, fan rotor speed (N1) for each engine, position of control surfaces and longitudinal, lateral and vertical acceleration.

Photographs taken as the aircraft was approaching Sioux City showed that the fan cowling and the fuselage tail cone of the failed number 2 engine were missing but that the rest of the engine appeared to be intact. An initial examination of the wreckage found that the fan rotor components of the failed engine forward of the fan shaft and part of the shaft itself had separated from the engine in flight. The progressive breakup of the aircraft after its first runway contact began immediately as the right wing broke and the final disposition of the various separated parts of the aircraft ended up as shown in the illustration below. Debris which was ejected from the engine at the time of the failure and fell to the ground but did not cause any personal injury or significant damage, and damage to airport facilities at Sioux City was negligible.

The distribution of the wreckage. [Reproduced from the Official Report]

It was established that at the time of engine failure, the First Officer had been acting as PF and had immediately announced that he could no longer control the aircraft, which began a right descending turn. The Captain took control and confirmed the lack of control but by reducing the thrust set on the number 1 engine, he was able to roll the aircraft to a wings-level attitude. Starting the Air Driven Generator (ADG), which is designed to power the number one auxiliary hydraulic pump, did not restore any hydraulic power to the aircraft and it was subsequently confirmed that debris from the failed engine had struck and comprehensively disabled all three hydraulic systems - the only means of moving the primary flight control surfaces. The off-duty Training Captain who had joined the flight crew to assist in responding to the emergency took over the manipulation of the number 1 and 3 engine thrust levers and with visual reference and sight of the First Officer's ASI, he was able to achieve course control of the aircraft flight path. He continued to do this until the aircraft made contact with the runway during the eventual emergency landing - the accomplished ground track is shown below. 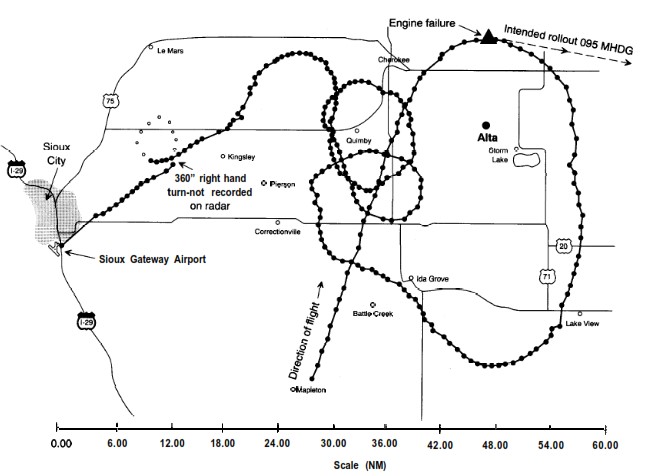 The ground track of the aircraft based on radar returns. [Reproduced from the Official Report]

The Investigation was able to establish that catastrophic failure of the fan disc of the General Electric CF6-6D engine had been caused by a fatigue crack that had originated in a metallurgical defect on the surface of the disk bore. It was concluded that this defect had its origin in the manufacture of the titanium alloy material from which the failed disc was formed. This flaw in the material was not detected by inspections performed during the manufacturing process or after installation of the disc in the engine and it caused the initiation of the fatigue crack which eventually caused the explosive failure. At the time of the failure, the disc had accumulated 41,009 flight hours and 15,503 flight cycles. It was noted that during successive routine off-wing engine overhauls in accordance with the prevailing maintenance procedures, routine inspection using fluorescent penetrant dye had failed to detect the crack. It was also determined that during the most recent of these overhauls, after which the engine had been installed on the accident aircraft for 760 flight cycles, the crack would have been of a size such that a properly performed inspection should have detected it.

Whilst the failure of a single engine should not have created a loss of flight path control, it was evident that the aircraft type certification process had not taken sufficient account of the need for containment of engine failure debris if the assumption that the integrity of the fan rotor would, by design and through routine engine overhaul requirements, never fail was unduly optimistic. The Investigation considered the way the flight crew and the assisting pilot had been able to achieve sufficient flight path control to be able to eventually reach and attempt to land on a paved runway surface at an airport with full RFFS capability and concluded that the aircraft, whilst flyable, “could not have been successfully landed on a runway with the loss of all hydraulic flight controls”. It was also concluded that the crew performance in the circumstances had been “highly commendable and greatly exceeded reasonable expectations” and that the exemplary interaction of the pilots during the emergency had been “indicative of the value of Cockpit Resource Management” which was an established part of the pilot training regime at United Airlines.

The Investigation examined all aspects of the post crash scenario in particular matters of cabin safety (including infant passenger restraint) and the response of the emergency services.

A total of 21 Investigation Findings were formally documented as follows:

The Probable Cause of the accident was determined as follows:

“The inadequate consideration given to human factors limitations in the inspection and quality control procedures used by United Airlines' engine overhaul facility which resulted in the failure to detect a fatigue crack originating from a previously undetected metallurgical defect located in a critical area of the stage 1 fan disc that was manufactured by General Electric Aircraft Engines. The subsequent catastrophic disintegration of the disc resulted in the liberation of debris in a pattern of distribution and with energy levels that exceeded the level of protection provided by design features of the hydraulic systems that operate the DC-l0's flight controls.”

A total of 28 Safety Recommendations were made as a result of the Investigation as follows:

On issue of the Final Report:

The Final Report of the Investigation was published on 1 November 1990.