On 19 August 2013, a fire occurred in the right engine of a Douglas DC3-C on take off from Yellowknife. After engine shutdown, a right hand circuit was made in an attempt to land back on another runway but trees were struck and the aircraft crash-landed south of it. Emergency evacuation was successful. The Investigation found that a pre-existing cylinder fatigue crack had caused the engine failure/fire and that the propeller feathering pump had malfunctioned. It was found that an overweight take off had occurred and that various unsafe practices had persisted despite the regulatory approval of the Operator's SMS.

On 4 November 2013, a Douglas DC3-C (C-GWIR) being operated by Buffalo Airways on a scheduled passenger flight from Yellowknife to Hay River as BFL168 had just taken off in day VMC when the right engine caught fire. The crew shut down the engine and attempted to return to the aerodrome but the aircraft struck trees and crash landed south of the intended landing runway. The fuselage of the aircraft was not seriously damaged by the impact and there was no fire. All 24 occupants were uninjured and completed a successful emergency evacuation.

An Investigation was carried out by the Canadian TSB. It was noted that the aircraft had not been fitted with either an FDR or a CVR nor were these required. It was noted that the aircraft Captain had approximately 13000 flying hours which included 4300 hours on the DC-3. The First Officer had approximately 500 hours of flight time including about 125 hours on the DC-3. The Captain was PF for the flight.

It was established that "heavy torching and smoke from the right engine" had been observed by ATC almost immediately after the aircraft had become airborne from runway 16. The flight crew were advised but did not reply as they were already aware. The right engine was promptly shut down and the propeller feathering pump selected. However, as the right propeller was moving towards the fully feathered position, it stopped moving and returned to windmilling. In an attempt to reach runway 10, the Captain made a right turn at a very low height (the maximum height achieved was approximately 180 feet agl) but whilst manoeuvring, the aircraft hit a group of trees about 30 feet high situated 210 metres south west of the threshold of the intended landing runway. Initial low-energy ground contact subsequently occurred approximately 130 metres beyond the trees with the landing gear and flaps retracted. A wreckage trail parallel to and south of runway 10 was around 100 metres long. The total time airborne had been about 5 minutes. Reconstructions of the flight track and vertical profile made during the Investigation are shown below. 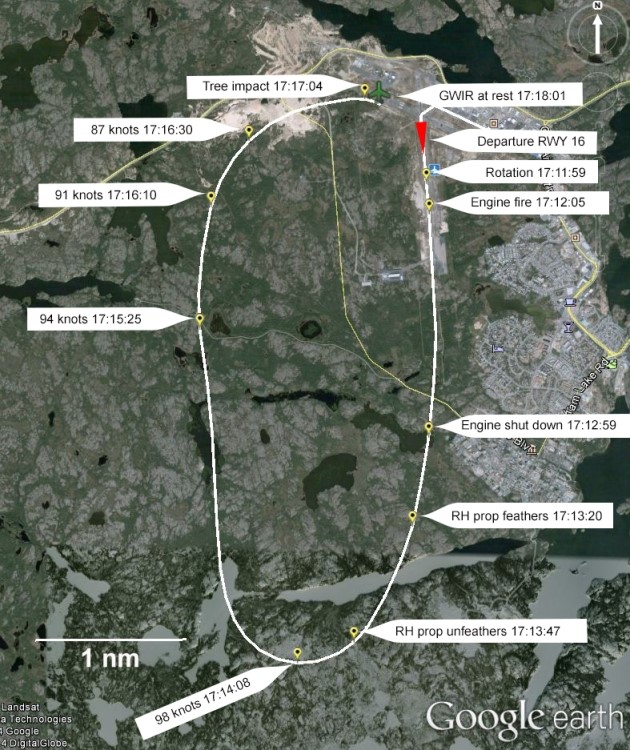 At the time of the crash, ARFF assets were engaged in an unrelated ground vehicle recovery operation in the vicinity of the crash site and arrived at the site almost immediately. There was no fire and once the aircraft had come to a complete stop, the cabin attendant initiated evacuation of the 21 passengers through the rear left door before returning to move some galley drawers which were blocking the entrance to the flight deck and confirmed that the pilots were safe after which all three crew members left the aircraft. The ARFF then made a precautionary application of fire-retardant foam to the aircraft. All occupants, none of whom were injured, remained at the site under ARFF supervision for approximately an hour before being transported back to the Terminal Building.

It was established that the aircraft maximum certified take-off weight in passenger configuration was 11884 kg. Taking the APS weight and adding the fuel load of 1228 kg, the passenger load calculated using the applicable standard passenger weights and the actual cargo weight of 486 kg, it was calculated that the actual take off weight had been 12444 kg, some 560 kg above the maximum permitted. It was also established that the Operator was routinely not undertaking the mandatory Net Take-off Flight Path (NTOFP) calculation for its DC-3 flights despite the replication of the requirement in Operations Manual.

According to the Aircraft Flight Manual (AFM), the aircraft should have been able to achieve a 330 fpm rate of climb at the maximum permitted takeoff weight with an inoperative engine feathered and both the flaps and landing gear retracted. With an engine idling and at the same weight in the same aircraft configuration, a single-engine rate of climb of 210 fpm should have been achievable. It was noted that the investigation of an Australian DC-3 accident in 1994 mentioned testing of the climb performance of a similar aircraft to see what the effect on single engine climb performance of increasing the maximum permitted takeoff weight would be. With the left (critical) engine inoperative and its propeller windmilling, the observed rate of climb at around the maximum permitted take off weight was only 100 fpm and at a 12700 kg, a weight only slightly higher than the calculated actual take off weight of the accident aircraft, climb was no longer possible. 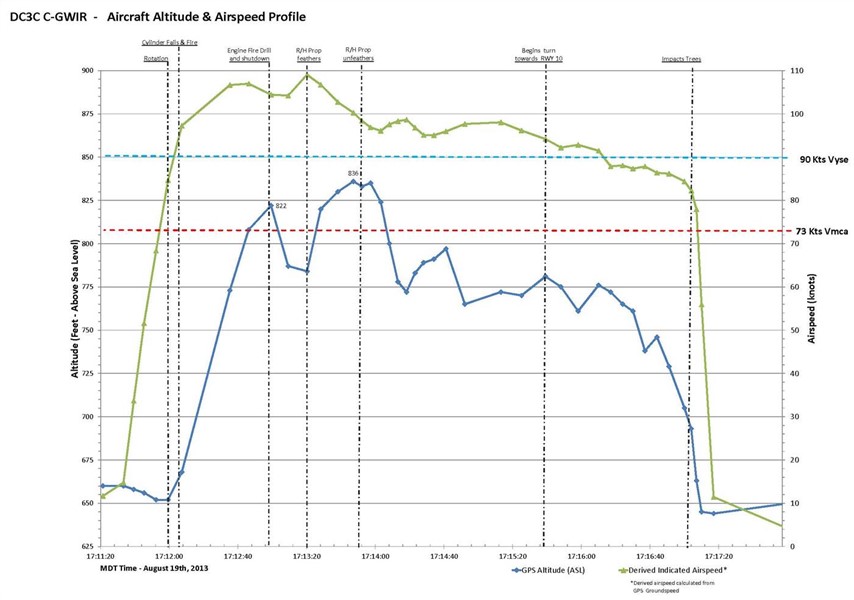 Examination of the failed engine found that Number 1 cylinder head and barrel had separated "due to a fracture of the barrel at the threaded joint with the head assembly". Further examination during the Investigation found a pre-existing fatigue crack in a thread groove on the outer mating surface of the barrel assembly. It was not possible to determine the cause of the fatigue crack because of post-separation damage around the point of origin. At the time of failure, the occurrence engine had accumulated 98.7 hours since a 1400 hour-interval overhaul. However, it was concluded that presence of the crack would not have been detectable externally nor by cylinder differential pressure checks.

The crew's inability to feather the failed engine propeller significantly diminished climb performance and in order to maintain the necessary minimum of 90 KIAS, it had been sacrificed to the extent that the crew had been barely able to maintain a constant altitude. The manoeuvring necessary to return to the airport then led directly to the loss of height "which ultimately resulted in the collision with terrain". It was established that when the right hand engine had been shut down and the feathering system had been activated, propeller rotation had slowed but the propeller had subsequently been seen to be windmilling for the rest of the flight. A fault was found in the electric feathering pump motor and it was noted that some system component failures can result in the pump continuing to run but only cycling the propeller blade angle through feather and back towards fine pitch. The effect of such excessive and changing propeller drag would make it difficult to control an aircraft. It was noted that "Buffalo Airways DC-3 flight crews were aware of" a procedure first notified in 1998 which advised that it was possible to interrupt a malfunction of the feathering system and fully feather the propeller by pulling the feathering button out when the propeller reaches full feather.

Taking a view of the context in which the accident had occurred, the Investigation noted that "a number of conditions contributed to the aircraft's inability to gain altitude, including the practice of operating the aircraft overweight" and that the aircraft had departed without a completed weight and balance calculation being made. That the operator's approved SMS had failed to identify and address such issues and that regulatory oversight had not detected the situation, was of concern to the Investigation. It was observed that since "neither the Pro-Active nor the Re-Active Risk Assessment programs identified issues relating to operational control, weight and balance or calculated aircraft performance, and that the practice of adjusting weight and balance calculations to maintain them within limits after departure was well known and accepted by senior management, it was highly unlikely that these unsafe practices would be reported through, or addressed by, the company's SMS".

Other indications that the organisational culture at Buffalo Airways "was not supportive of a system that required the organisation to take a proactive role in identifying hazards and reducing risks" were found during the Investigation. In particular, Company response to findings during regulatory inspections "demonstrated an adversarial relationship between the Company and the Regulator" in which the regulatory basis of findings was refuted and the competence of inspectors questioned. The Investigation concluded that "the overall picture that emerged....was of an organisation that (only) met the basic requirements of regulations when pushed by the regulator".

Two Other Findings were also recorded:

Safety Action taken as a result of the occurrence by Buffalo Airways was recorded as including the following:

The Final Report was authorised for release on 22 April 2015 and officially released on 27 April 2015. No Safety Recommendations were made as a result of the Investigation.