On 3 December 1990 a Douglas DC9-10 flight crew taxiing for departure at Detroit in thick fog got lost and ended up stopped to one side of an active runway where, shortly after reporting their position, their aircraft was hit by a departing Boeing 727-200 and destroyed by the impact and subsequent fire. The Investigation concluded that the DC9 crew had failed to communicate positional uncertainty quickly enough but that their difficulties had been compounded by deficiencies in both the standard of air traffic service and airport surface markings, signage and lighting undetected by safety regulator oversight.

An Investigation was carried out by the National Transportation Safety Board (USA) (NTSB). The FDR and CVR from both aircraft were recovered and successfully replayed.

The 52 year-old DC9 Captain, who had been acting as PF, had accumulated approximately 23,000 hours total flight time including 4,000 hours on type. The accident flight was his first since his release to unsupervised command status following almost 7 years during which a medical condition had resulted in the complete suspension of his licence privileges. Prior to that he had completed around 5 years as a DC9 Captain with an operator which, during his non flying period, had become part of Northwest Airlines. The 43 year-old DC9 First Officer had recently left the USAF and had been employed by Northwest Airlines for just over 6 months at the time of the accident. He had approximately 4,685 hours total flying time of which 185 hours were on type.

The 25 year-old Runway Controller involved had previously been a US Army controller and had begun work at Detroit 2½ year previously and had been fully qualified in position for almost two years at the time of the accident. The 26 year-old (East) GND controller had been employed as such for about 5½ years and after transferring to Detroit five months previously had been qualified in position for just over 2 months. The 35 year-old TWR supervisor had been at Detroit for 5 years and certified in her current position a little over 2 months prior to the accident.

It was established that the DC9 taxi out was conducted with a degree of ambivalence almost from the start in forward visibility which may well have been rather less than the promulgated 400 metres which was the visibility from the TWR cabin assessed by trained controllers. Early doubts that the intended taxi route was being followed were not communicated to ATC who therefore did not intervene. The aircraft left the ramp with a clearance to taxi via Oscar 6 to runway 3C. On transfer to GND east, this was amended, based on their correctly reported position to "Inner, Oscar 6, Fox to report making the right turn on Xray". The diagram below shows that the instructed routing would have taken the aircraft across closed runway 09/27 (notified as such on the ATIS) onto taxiway Fox which would have taken them (off the diagram) to a right turn onto taxiway Xray (partly visible in the top right corner of the diagram and running parallel to notified departure runway 03C), at the end of which a left turn would have been required to enter the beginning of the runway when so cleared. 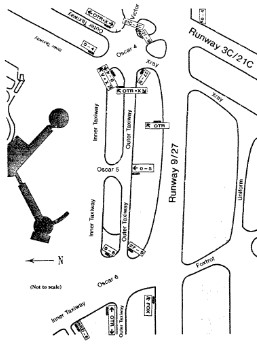 The aerodrome layout in the area where the taxi route followed by the DC9 went completely wrong but was continued. [Reproduced from the Official Report]

Instead, the DC9 turned left on the Outer taxiway and began to head east, a fact not picked up by either pilot referring to their compass. Once on this taxiway, the opportunity to make a right turn onto taxiway Xray still existed at the Oscar 4 intersection. This may have been why the increasingly confused First Officer who, the CVR evidence suggested, was continuing to "take the lead" in facilitating continued taxiing despite the increasing uncertainty of position and the risk that the aircraft was now no longer complying with its clearance and GND had not been informed. In any event, after a conversation between the two pilots which did not produce any clear understanding for either of them of exactly where they should go next, the aircraft was then turned not hard right onto taxiway Xray but slightly right onto Oscar 4 and, without appreciating it, onto the active departure runway 3C facing south, where the Captain decided in eventual recognition that they were lost and could be on an active runway, to stop the aircraft on the left hand side, set the parking brake and seek ATC assistance. At this point, the 727 was 96 seconds from beginning their take-off roll. After a further 16 seconds of inter-pilot exchanges on the DC9 flight deck, the Captain called GND and in an exchange in which GND sought to clarify the aircraft position, eventually stated after advice from the First Officer that "it looks like we're on 21 centre here". GND then took 10 seconds to reply and requested confirmation which was tentatively given. Five seconds later, GND transmitted "if you are on 21 centre, exit that runway immediately". The two aircraft collided 7 seconds later with the 727 still on the ground and accelerating towards take off.

The 727 had been making its take-off with the Captain as PF and with the visibility being promulgated equivalent to the Company minimum for that runway. The crew subsequently detected a deterioration in visibility as the aircraft accelerated towards 100 knots but the Captain reported having had sufficient visual reference to be able to keep the aircraft on the centreline. The DC9 had "suddenly appeared on the right side of the runway" and in the path of the 727s right wing. An avoidance manoeuvre was attempted but to little effect in the time available and the right wing tip impacted the right side of DC9 fuselage 37 seconds after the take-off had begun. The 727 right wing then passed over the DC9 right wing and the DC9 right wing tip was detached by impact with the 727 right main gear assembly. Finally, the DC9 right engine was detached during impact with the 727 wing tip, the latter then detaching too. The 727 was brought to a stop approximately 640 metres beyond the DC9. 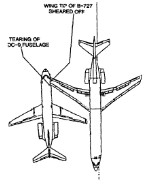 The initial contact between the two aircraft. [Reproduced from the Official Report]

The DC9 First Officer reported having ducked as the 727 wing tip grazed his side of the flight deck and the Captain immediately ordered an emergency evacuation of the aircraft on the PA system. A fuel-fed fire broke out immediately and evacuation was accomplished using L1 door, initially without the evacuation slide and subsequently the R1 door and the left over wing exit. Although the aft-stationed cabin crew and one passenger entered the tail cone via the access hatch, the exit was not opened during the evacuation by either the crew member or the attending ARFF personnel and the internal tail cone release mechanism was subsequently found to have been "mechanically inoperable". Both those occupants were among the fatalities.

Several ARFF vehicles initially arrived at the 727 and, although it was not obviously on fire, had applied foam. However, once the DC9 had been located some 6 minutes after the collision had occurred and having confirmed there was no sign of fire at the 727 and the Captain determined that there was no immediate need to evacuate the aircraft, all of the ARFF vehicles had departed to the DC9. By the time the ARFF resources arrived at the DC9, "the cabin environment appeared to be non-survivable" due to fire and those who were able had evacuated. About 15 minutes after the collision, the 727 Captain instructed passengers to leave the aircraft via the ventral stairway. Flight and Cabin crew assisted and passengers were allowed to take their carry-on baggage.

The (East) GND controller subsequently stated that he could not remember if he had heard take-off clearance being given to the 727 by the runway controller but on hearing the DC9 Captain reporting that they were unsure of their position and may be on a runway, he "loudly announced" that he had a lost aircraft which might be on the runway. The Supervisor then immediately instructed all controllers to "stop all traffic". Although he had not been following the 727 on the "Bright Radar Indicator Tower Equipment" (BRITE) and visibility precluded seeing it, the runway controller believed that the 727 was already airborne based on the time since it had been cleared for take-off and the engine noise he had heard, and announced this as a fact. However, whilst the Investigation concluded that the runway controller should have advised the 727 that there may be another aircraft on the runway, it was considered that this may not have made any difference to the outcome since by then the aircraft would have been already rolling at speed.

In a detailed review of all airport signage, lights and pavement markings, the Investigation found "some rather obvious shortcomings" which although they were not violations of any FARs, "reflected a disregard for the guidelines in several FAA Advisory Circulars concerning airport operations" and it was concluded that "oversight by [both] airport authority managers and FAA Airport Safety and Certification Inspectors was lacking”.

The Investigation noted considerable evidence from the CVR data that the DC9 First Officer was somewhat more dominant and personally over confident than might be expected for a new hire. It was concluded that whilst interaction between the two pilots prior to the collision had not been directly undermined by this, it had certainly contributed to the continuation of taxiing despite the early signs of positional uncertainty. In this respect, it was noted that at the time of the accident, Northwest did not provide CRM training to either its line Captains or First Officers.

The Investigation noted that Safety Action in response to the accident had included that taken by the Detroit Airport Authority, by Northwest Airlines and by McDonnell Douglas, the latter being a redesign of the DC9 tail cone operating system after the inoperability of the egress in the accident had been found to be caused by a previously unrecognised design deficiency.

It was determined that the Probable Cause of the Accident was "a lack of proper crew coordination, including a virtual reversal of roles by the DC9 pilots which led to their failure to stop taxiing their airplane and alert the ground controller (to) their positional uncertainty in a timely manner before and after intruding onto the active runway".

Three Contributory Factors were identified as:

At the conclusion of the Investigation, sixteen Safety Recommendations were made as follows:

The Final Report of the Investigation was adopted by the Board on 25 June 1991 and subsequently published. Editor's Note: Page 67 of the Report is missing.