On 7 December 1983, a Boeing 727-200 taking off from Madrid in thick fog collided at high speed with a Douglas DC-9 which had not followed its departure taxi clearance to the beginning of the same runway. The DC-9 crew did not advise ATC of their uncertain location until asked for their position after non-receipt of an expected position report. The Investigation concluded that flight deck coordination on the DC-9 had been deficient and noted that gross error checks using the aircraft compasses had not been conducted. The airport was without any surface movement radar.

On 7 December 1983, a Boeing 727-200 (EC-CFJ) being operated by Iberia on a scheduled passenger flight from Madrid to Rome Fiumicino as IB 350 collided in thick fog in daylight with a Douglas DC-9-30 (EC-CGS) being operated by Aviaco on a scheduled domestic passenger flight from Madrid to Santander as AO 134. Both aircraft caught fire immediately after the impact and both were subsequently destroyed. All 42 occupants of the DC-9 were killed as were 51 of the occupants of the 727 with 42 others on board the latter surviving with unspecified levels of injury. There was also extensive consequential damage to the runway surface and signage.

An Investigation was carried out by the Spanish Civil Aviation Accident Investigation Commission (CIAIAC). FDR data as recovered from both aircraft and CVR data was recovered from the 727, The DC-9 was not fitted with a CVR and because of grandfather rights was not required to be. The usefulness of the FDR data was limited by the small number of parameters recorded on the metallic tape mechanism used by both of them. Extraction of data from the DC-9 FDR was difficult and required special methods.

It was established that runways 01 and 33 were in use but as the latter was designated for landings only, it was unused because the RVR was below that for which landings were permitted. Runway 01/19 was 3,700 metres long and 45 metres wide and was equipped with high intensity edge, centreline, threshold and end of runway lights. All taxiways were 30.5 metres wide and were equipped with edge lighting and centreline markings. Runway holding points were marked but without any associated pavement lighting.

The METARs for the period prior to the accident and immediately after it all recorded a visibility of 100-200 metres in fog with the sky obscured, the wind calm and the temperature and dew point both 0°C. After 0800 - the collision occurred just after 0839 - the recorded RVRs which were measured at the threshold of each runway and at their intersection were all in the range 250-300 metres.

The Investigation found that the DC-9 crew had received engine start approval and correctly acknowledged their taxi clearance nine minutes prior to the accident. With the Captain as PF, the correctly-acknowledged clearance involved leaving the parking area with two left turns which were followed and which brought the aircraft to a five-way junction - see the diagram below. At this point, the clearance to follow the Oscar taxiway required a 90° right turn onto taxiway 'O7' which led directly via 'O6' to 'O5' and the full length holding point for runway 01 with a position check entering 'O5' being requested as part of the clearance.

However, having tracked slightly to the right of the taxiway centreline as this junction was approached, the aircraft had taken a lesser turn to the right onto taxiway J1. It had then continued to follow the centreline of this taxiway until it split into two as it reached the intersection of the two runways, where it took the right turn onto runway 01/19 so as to face in the 19 direction. Initially (see the second diagram below), the aircraft was at the side of the runway but then, in what was assessed to have been a reaction to a recognition that the aircraft had entered a runway, it turned right to cross to the opposite side of the runway and as it did so, was hit by the 727 which, with the Captain as PF, had just passed V1. The 727 had begun taxiing towards the runway 01 threshold after the DC-9 but as it had been parked a lot nearer and had reached there well ahead of when the DC-9 would have, and had then been cleared for take-off whilst the DC-9 was still on the GND frequency. 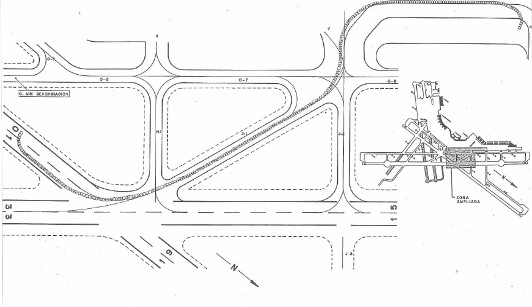 The taxi route followed by the DC-9 from its parking position to the collision. [Reproduced from the Official Report]

At the point of impact, the DC9 was on runway 01/19 approximately 230 metres south of the intersection of that runway with runway 15/33. A fuel fed fire began immediately in the wreckage of both aircraft. 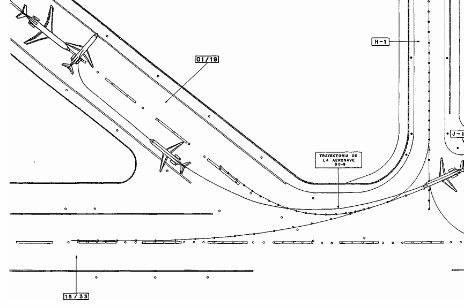 The final track of the DC-9 showing the relative aircraft positions as they collided. [Reproduced from the Official Report]

It was found that this final turn by the DC-9 had begun at the point where the GND controller had commenced his radio call querying the aircraft's position in the absence of the requested call when entering taxiway 'O5'. The radio exchange and the manoeuvre had both taken up the 19 seconds which remained until impact.

The Investigation considered various possible explanations for the gross error in taxiing by the DC-9 crew and, at length, examined issues relating to the measurement of RVR in relation to meteorological visibility in radiation fog of the sort which prevailed at Madrid on the morning of the accident. For the purpose of the latter, reference was made to the then-current ICAO Circular 148 'Surface Movement Guidance and Control Systems' (1979). It was noted that at the time of the accident, there was no applicable State regulation or guidance on low visibility taxiing by departing aircraft although there was reference in the AIP to procedures for "towed aircraft", "arrivals" and "movement of vehicles on the apron" in low visibility conditions. The airport was limited to Cat 1 approaches by arriving aircraft although plans to progress to Cat 2 had been initiated in 1979.

In respect of the recorded flight data available to assist the Investigation, the limitations of the type of FDRs installed in both the aircraft involved and the loss of potentially useful evidence due to the lack of a retrospective regulatory requirement to fit a CVR to the DC-9 were noted.

The Conclusions of the Investigation included the following:

It was determined that the Probable Cause of the Accident was:

"The unknown incursion of DC-9 on the runway 01/19, when the B727 was on take-off roll. The DC-9 was on the active runway because visibility conditions due to fog in the zone where the aircraft was taxiing prevented the crew obtaining sufficient visual references to determine that their taxi route was not the correct one that they should follow to reach the threshold of runway 01".

Nine Safety Recommendations were made at the conclusion of the Investigation as follows:

The Final Report of the Investigation was completed in May 1986 and subsequently published in both Spanish and English.