On 4 March 2011, an aircraft left the runway during a mishandled landing at Nuuk, Greenland which resulted in the collapse of the right main landing gear due to excessive 'g' loading. The landing followed an unstabilised VMC approach in challenging weather conditions. The Investigation concluded that the crew had become focussed solely on landing and that task saturation had mentally blocked any decision to go around. The aircraft commander had less than 50 hours experience on the aircraft type and had only been released from supervised line training 6 days earlier.

On 4 March 2011, a De Havilland DHC8-100 (TF-JMB) being operated by Air Iceland on a scheduled passenger flight from Reykjavik, Iceland to Nuuk, Greenland with a pre-planned en route technical stop as Kulusuk, Greenland for fuel uplift. The landing at Nuuk after a day Visual Meteorological Conditions (VMC) approach resulted in a runway excursion. The aircraft sustained significant damage and all 34 occupants were uninjured and no immediate evacuation was deemed necessary given the prevailing extreme weather conditions. 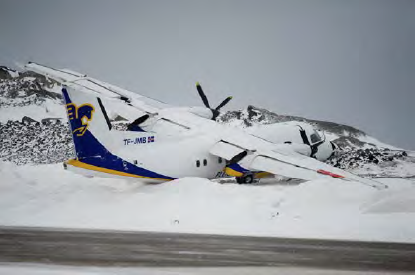 The aircraft in its final resting position. (Reproduced from the Official Report)

The Investigation undertook an extensive investigation of the pre-crash airworthiness and loading of the aircraft and concluded that neither had played any part in the accident.

Although experienced on the DE HAVILLAND CANADA DHC-6 and FOKKER F50, the aircraft commander was on his fourth day in command on the aircraft type and had just 44 hours experience on it, almost all of this during conversion or on line training under supervision, none of which had involved flying into Nuuk. The First Officer had 1130 hours on type as well as other experience.

It was noted that the forecast conditions for the ETA at Nuuk prior to departure from Reykjavik had been sufficiently poor to require the nomination of two destination alternates. It was also noted that the actual weather conditions subsequently encountered both en route and at Nuuk had been in line with those forecast. It was established that departure on the 2 hour flight from Kulusuk to Nuuk had been delayed by the crew to await an improvement in the weather at Nuuk.

The aircraft commander was PF. En route, about 40 minutes from landing, the Nuuk weather was passed as 160°/33-48 knots with visibility 3000 metres in snow with fog patches, low drifting snow, cloud BKN at 2800 feet and temperature -0° C. A runway 23 approach was briefed, based on the LOC/DME procedure for that runway (see the plate used by the crew for this procedure below) until visual. However, because of the prevailing wind conditions at Nuuk, the crew decided that the landing flap setting would be 15° rather than the usual 35° and that the final approach would be flown with the airspeed “on the high side” and to the right of the LOC and the runway extended centreline once visible as well as above the normal vertical profile. The aim would be to regain the extended runway centreline "not too close to the runway end".

The approach was flown essentially as briefed, although at approximately 700 feet, the flaps were set to 35° for landing. A deviation to the right of the LOC was made approximately 2 minutes prior to touchdown when leaving 2000 feet. The AP was disconnected at this point and by 1400 feet, the landing checklist had been completed. The track flown was at an angle of between 25 and 35 degrees to the runway extended centreline measured from the runway threshold. The expected turbulence on the approach was continuous but generally moderate rather than severe.

As the runway was approached, the aircraft was still offset from the extended centreline and the corrective turn to the right was an abrupt manoeuvre made below 50 feet and over the runway. Touchdown occurred to the left of the centreline and approximately 200 metres beyond the threshold at 7 knots below the applicable Reference Speed (Vref) of 95 KIAS. However, as it occurred, the aircraft was moving sideways and banking to the right such that right MLG made a hard contact with the runway ahead of the left and immediately collapsed due to overload - FDR data indicated an instantaneous vertical loading of 3.9g. The right wing and right engine propeller hit the runway and the outer third of all four right propeller blades was sheared off. The aircraft then veered briefly right and then left before departing the runway to the right into rocks which led to the NLG being destroyed and the aft fuselage substantially damaged.

Once the aircraft had come to a stop, it became clear that the passenger cabin and flight deck were intact and there had been no injuries to the occupants who had all been secured. It was judged that with no sign of fire and with unpleasant weather outside, there was no need to order an immediate evacuation. Eventually, passengers were disembarked through the forward right service door having put on their overcoats inside the cabin. Rescue and Fire Fighting Services personnel then guided the passengers across the runway to the terminal building which was a few hundred metres away. 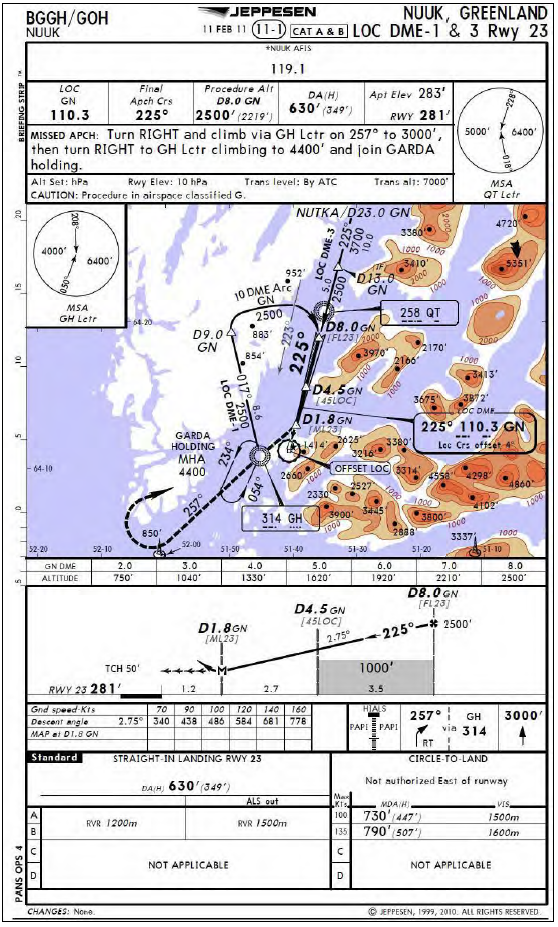 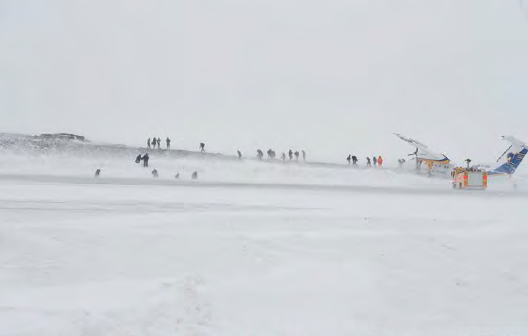 Passengers leaving the aircraft. (Reproduced from the Official Report)

The Investigation considered that throughout the approach, a combination of strong winds and "moderate to severe orographic turbulence" due to the surrounding mountainous terrain had increased the pilots' workload. It was evident from the available recorded data that the Operator's stabilised approach parameters had not been met and that no flight crew call outs on divergence from the operator’s stabilised approach policy had been made. Once below 500 feet agl, turbulence and pilot work load had increased considerably and it was considered that at this point, the pilots "most likely suffered from task saturation and information overload" to the extent that the go around option was mentally excluded. It was noted that in the final stages of the approach, deviations from "important low altitude stabilised approach parameters like airspeed, bank angle and runway alignment were not sufficiently corrected". The result was that as the runway was reached, the aircraft had not been in a position to make a safe landing. Overall, the view was taken that "optimum crew resource management was not present".

It was also noted that, given the wind velocity given by Nuuk AFIS before landing - a mean of 180° variable between 140°and 220° at a mean speed of 17 knots and a maximum of 42 knots, the crew had been prohibited from attempting a landing under the guidance contained in the Operator’s Aerodrome and Procedure briefing for Nuuk.

The Conclusions of the Investigation were formally summarised as follows:

The divergence from the operator’s stabilized approach policy caused an unstabilised approach and a hard landing leading to an excess load of the right MLG at touchdown. According to its design, the right MLG fuse pin sheared as a result of stress."

Safety Action taken by the Aircraft Operator as a result of the accident included the introduction of even stricter wind limits for BGGH and the provision of a graphical wind-rose for crew reference purposes.

The Final Report was published in English translation on 2 May 2014 following initial publication in French on 10April 2014. No Safety Recommendations were made.