On 23 January 2019, a Bombardier DHC8-100 failed to complete its intended night takeoff from Rouyn-Noranda after it had not been commenced on or correctly aligned parallel to the (obscured) centreline and the steadily increasing deviation had not been recognised until a runway excursion was imminent. The Investigation attributed this to the failure of the crew to pay sufficient attention to the external perspective provided by the clearly-visible runway edge lighting whilst also noting the Captain s likely underestimation of the consequences of a significant flight deck authority gradient and a failure to fully follow relevant applicable operating procedures.

On 23 January 2019, a Bombardier DHC8-100, (C-GTCO) being operated by Air Creebec on a scheduled domestic passenger flight from Rouyn-Noranda to Montréal as CRQ926 left the side of the takeoff runway during an intended night takeoff in normal visibility and came to an abrupt stop when it hit a snow bank 12 metres beyond the runway edge. The aircraft was substantially damaged but there was only one minor passenger injury and an emergency evacuation was not deemed necessary pending the arrival of the emergency services. 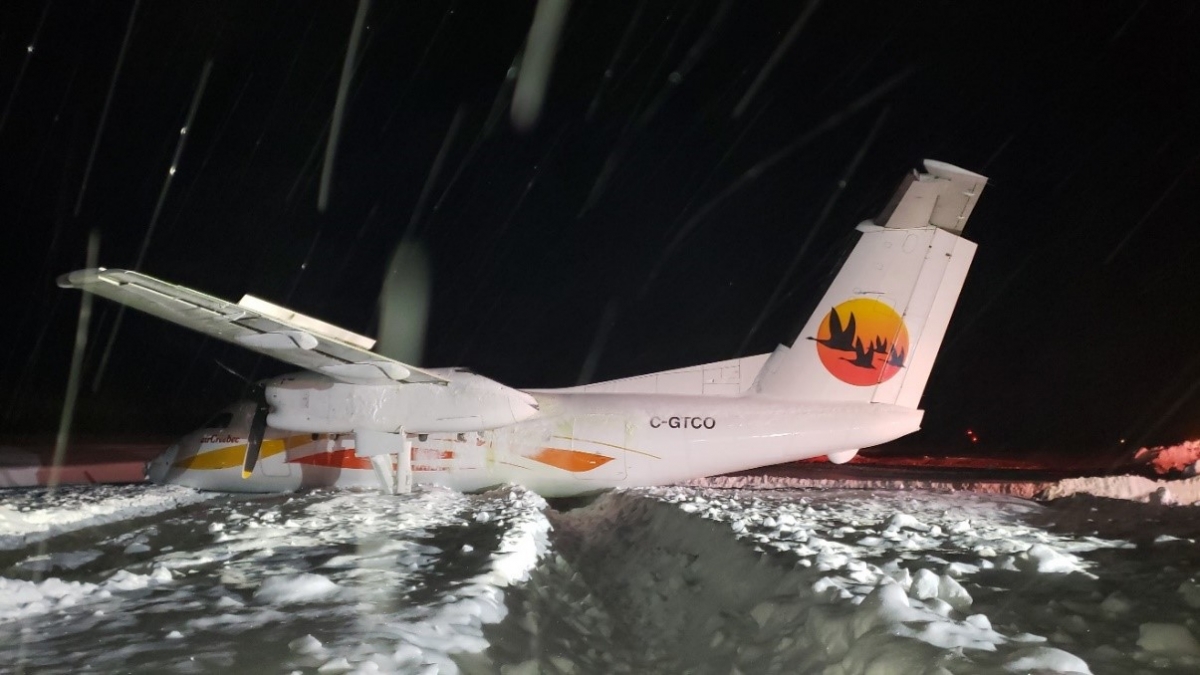 The aircraft in its final stopped position following the veer off. [Reproduced from the Official Report]

An Investigation was carried out by the Transportation Safety Board of Canada (TSB). The aircraft FDR and CVR were removed and their data, covering the accident departure, were successfully downloaded.

It was noted that the Captain, who had been PF for the flight, had a total of 12,500 flying hours including 8,000 hours on type and had 12 years’ experience with the aircraft operator. The First Officer had commenced employment with the aircraft operator in an airside ground handling capacity in 2016 whilst completing his basic training as a professional pilot. He passed his initial pilot proficiency check on the DHC8-100 five months prior to the accident, by which time he had accumulated a total of around 1000 flying hours of which 300 were on type. It was noted that the Captain’s licence had been issued subject to a restriction that when using its privileges, he must be accompanied by another pilot holding an unrestricted medically valid pilot licence, a condition which was satisfied for the duty in question. The aircraft operator had been made aware of this restriction but had taken no action to ensure compliance with it.

It was established with the prevailing weather conditions including surface visibility equivalent to 3200 metres in light snow, an on stand airframe de icing-treatment using Type 1 fluid was followed by a Type 4 anti-icing treatment after completion of which, the engines were started. Before commencing taxi for departure runway 26, the airport FSS (Flight Information Service Officer/Operator) passed the most recent Aircraft Movement Surface Condition Report (AMSCR). This indicated that the central 33 metres of the runway was covered with snow to a depth of 0.25 cm and the remaining 6 metre-wide runway margins with snow to a depth of 2.5 cm metres with snow windrows parallel to and just clear (by 1.5 metres) of the lit runway edge. However, as the aircraft approached the runway access as cleared, the FSS advised that permission to take off for Montréal in accordance with the issued route clearance had been temporarily withdrawn. The aircraft returned to the apron and the engines were shut down and the passengers deplaned. Soon after this a new takeoff slot about an hour later was given. As it approached, the passengers were re-boarded and Type I de-icing fluid was again applied. The engines were then started and taxi to runway 26 was commenced. The previously communicated AMSCR was still the most recent. 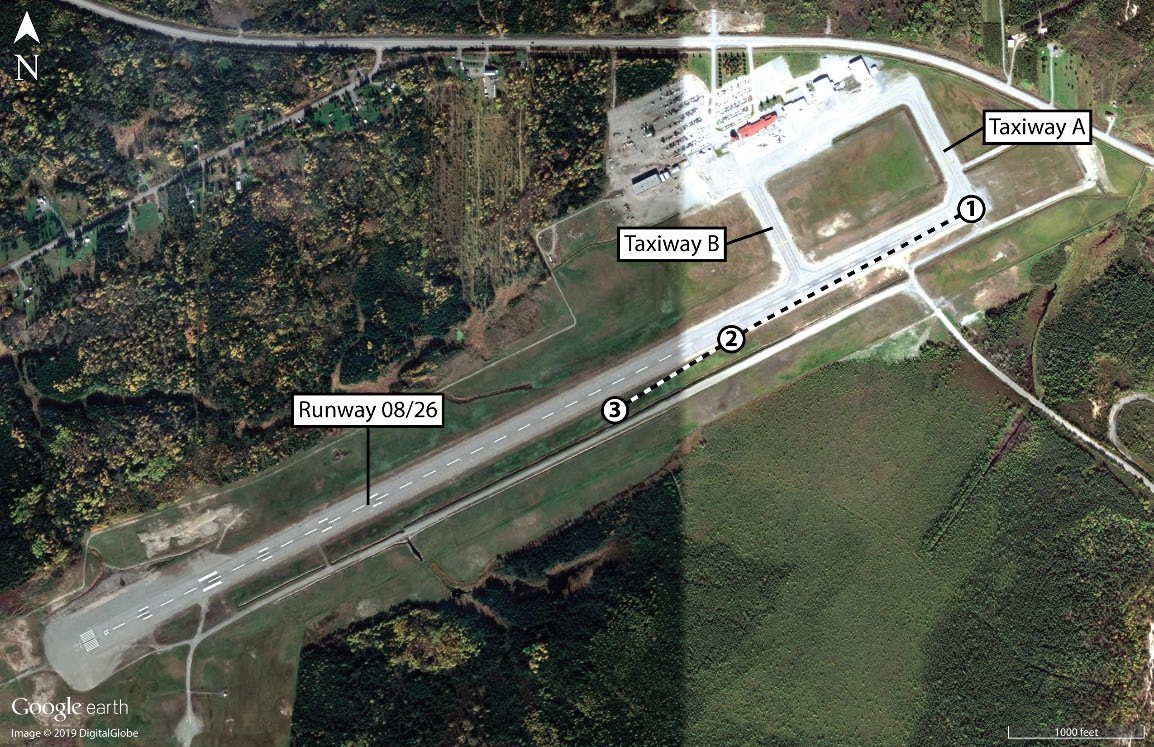 The track followed by the aircraft (point 2 is where the left main gear departed the runway). [Reproduced by the Official Report]

It was too late to make a correction and once off the paved surface, the left main landing gear was the first to hit the snow windrow which caused the aircraft to spin to the left approximately 5°. After briefly attempting to correct the ground track the Captain “decided to reject the takeoff by reducing engine power” but when seeking to retard both power levers with his right hand, the Captain “caught the right engine lever with his little finger, pushing it completely forward” whilst only retarding the left engine power lever which considerably increased the veer left. His attempt to control the aircraft using the rudder pedals was unsuccessful and five seconds later, after the nose wheel and right main landing gear had also hit the snow windrow, the aircraft hit a “compacted snowbank” almost a metre high which ran parallel to and about 12 metres from the runway edge and immediately spun rapidly to the left. The Captain finally reduced power on the right hand engine and the aircraft came to a stop approximately 900 metres from the threshold of the 2300 metre-long runway on a heading of 147° some 60 metres to the left of the centreline.

The engines were shut down, the FSS was advised of the runway excursion. The Captain then gave the order to evacuate “but then changed his mind when he noticed that there was no danger and everyone could remain inside the passenger cabin” and wait for the emergency services to arrive after which the passengers, only one of whom sustained (a minor) injury, were deplaned and taken back to the passenger terminal. The aircraft was found to have been substantially damaged, in particular when it hit the snowbank, at which point sections of both propellers had broken off and damaged each side of the fuselage. The aircraft nose, belly and landing gear were also damaged.

The Investigation noted that the (obscured) runway centreline markings, the installed runway and taxiway lighting and snow clearing procedures were all in accordance with applicable regulatory requirements and at the time of the accident were respectively fully serviceable / followed. Site trials conducted by members of the investigation team confirmed that the installed runway lighting had provided the pilots with adequate visual reference to ensure their aircraft remained in the centre of the runway during the takeoff roll even when the centreline markings were not visible provided that they had looked far enough ahead along the runway. However, in the accident takeoff roll, it was concluded that the Captain, as PF simply “did not look far enough ahead for long enough to notice that the aircraft was deviating to the left” before it departed the runway. 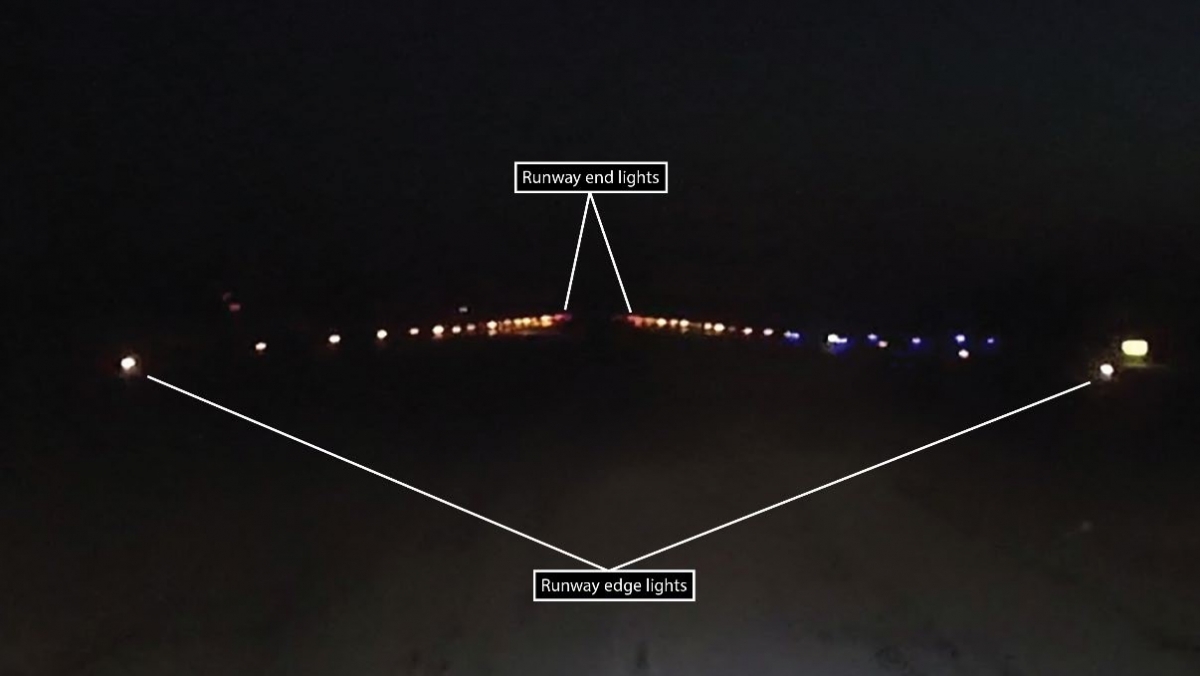 Runway lighting at night viewed from the 26 threshold when on the centreline. [Reproduced from the Official Report]

It was also noted that in accordance with the aircraft operator SOPs, a pre-takeoff briefing was required to be given by the designated PF but that it was evident from the CVR data that no such briefing had been given. The clearly evident change in runway edge lighting perspective if an aircraft accelerating down the runway at night fails to remain at or near to the centreline was also clearly demonstrated during other work during the Investigation with a deviation as little as 9 metres on the 45 metre wide runway involved being clearly discernible and very clearly obvious if an aircraft was at the left hand edge of the runway (see the illustration below). 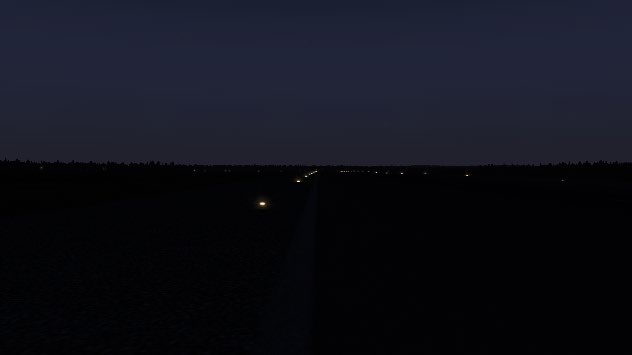 Runway lighting at night viewed from the 26 threshold when at the left hand edge of the runway. [Reproduced from the Official Report]

The PM role played by the First Officer during the accident takeoff roll was found to have been ineffective in detecting the Captain’s failure to make any corrections to the initial misalignment as the speed increased. In the presence of a very significant authority gradient, this was attributed to the First Officer’s belief that it was “unnecessary to monitor the departure path or to double-check the Captain’s actions because the latter had much more experience” and possibly also the fact that the Captain had felt obliged to monitor the First Officer’s actions quite closely given his low experience which would have compromised his focus on the external view.

Safety Action taken as a result of the accident during the course of the Investigation was noted as having included corrective action in respect of the Air Creebec automated flight and crew management system to ensure that restrictions on crew pairing are in the future properly taken into account when assigning pilots to duties.

The Final Report of the Investigation was authorised for release on 5 February 2020 and it was officially released on 9 March 2020. No Safety Recommendations were issued.