On 3 September 2014 in Class 'E' airspace, a light aircraft carrying out a spin recovery exercise in day VMC came very close to a DHC8 climbing out of Sault Ste. Marie. Although the DH8 crew had seen the light aircraft ahead and above and temporarily levelled off, the light aircraft then began a rapid descending turn and a TCAS RA 'Descend' followed. It was judged that a turn would also be necessary but even with this, the two aircraft subsequently passed within 350-450 feet at the same altitude in opposite directions. The Investigation made no Safety Recommendations.

On 3 September 2014, a Bombardier DHC8-100 (C-GJMI) being operated by Jazz Aviation on a scheduled domestic passenger flight from Sault Ste. Marie to Toronto as JZA7794 and a Zlin Z242L being operated for pilot training purposes by Sault College and manoeuvring came into very close conflict in day VMC despite the DH8 crew having visual contact and responding accordingly.

An Investigation was carried out by the Canadian Transportation Safety Board using the FDR data from the DHC8 and radar recordings as the means to determine the relative flight paths as the conflict scenario developed. The location of the conflict was identified as 8nm south east of Sault Ste. Marie airport in Class 'E' US airspace under the control of Toronto ACC. This Class 'E' airspace borders the Class 'D' airspace of the Sault CTZ which extends to 3000 feet Altimeter Pressure Settings and has a 5nm radius from the airport plus an extension in the direction of the nearby VOR. The pilots of both aircraft and the controllers involved were all "considered sufficiently experienced for their current roles".

It was noted that the Zlin aircraft, with an instructor and student on board was based at Sault Ste Marie and had departed from runway 22 there and eventually left the CTZ to conduct some upper air exercises prior to the subsequent departure of the DHC8 from the same runway. In the absence of any known conflicting traffic, the DHC8 had, in accordance with normal practice been instructed by Sault TWR - manned by a Trainee and an OJTI - to contact Toronto Centre once airborne from runway 22 at Sault Ste. Marie and had done so. Then, having checked in with Toronto passing 2000 feet on a SID requiring continuing ahead until 4000 feet, the DHC8 was given a left turn direct to the next FPL waypoint and climb to FL210 and continued the climb at approximately 1200 fpm.

Passing 4000 feet, a TCAS TA alerted the crew to traffic approximately 1000 feet above at 1 o'clock relative at 3nm ahead and it was acquired visually and seen to be a light aircraft tracking in a reciprocal direction. The DH8 was leveled at 4500 feet but soon after this, the crew "noticed the right wing of the light aircraft drop and the aircraft enter a rapid descending turn" and observed that "the flight path of this rapid manoeuvre was diagonally right to left (from their perspective) and had put the two aircraft on a collision course". Almost immediately, a TCAS RA 'Descend' was annunciated but the Captain, as PF, "assessed that due to the flight path of the descending aircraft a descent would not be sufficient" and turned 30° left as an evasive action. Whilst in this turn, the crew saw that the light aircraft had recovered from its rapid descending turn and was passing to their right at the same altitude with approximately 350 - 450 feet separation. Once clear of conflict, ATC were advised of the RA and the traffic encounter which had occurred.

The Investigation confirmed that the Zlin light aircraft which had departed Sault earlier had been the conflicting aircraft and that having left the Sault TWR frequency on leaving the CTZ, it was not in contact with or monitoring either Sault TWR or Toronto Centre. The conflict was found to have occurred as a result of the second of two spin recovery exercises, commenced from 5200 feet two minutes after the DHC8 had turned left following receipt of the direct-to re-clearance from Toronto Centre. 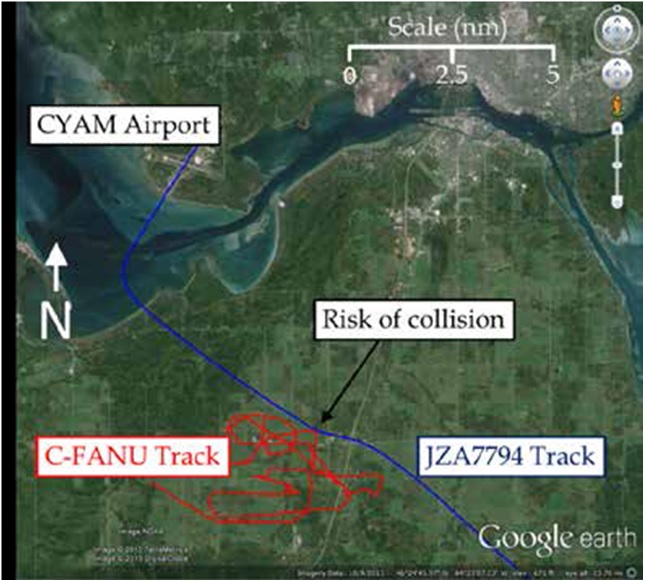 The tracks of the conflicting aircraft (CYAM was the DH8 departure point, C-FANU was the light aircraft involved) (Reproduced from the Official Report)

The student pilot was reported to have "arrested the spin and the descent at approximately 4500 feet" after which "just as the rotation stopped, the student and instructor both noticed a large aircraft very close ahead and the student banked the aircraft sharply to the left".

The sector controller at Toronto ACC had not noticed the conflict. It was found that they had been using their 50 cm x 50 cm radar display at a setting which would enable them to see the whole sector (150 nm x 235 nm). Such setting results on 1 cm screen resolution being equivalent to 6 nm. The controller reported being "used to seeing VFR targets surrounding Sault Ste. Marie" and preferred to have traffic symbols associated with such targets dimmed to the lowest available setting to ensure that IFR targets stood out. He stated that in his experience, such VFR targets were "most often at low altitudes (less than 5000 feet) and generally didn’t conflict with IFR traffic".

The Investigation noted that at the point where the "direct-to" re-clearance had been given, the targets for the two aircraft had been separated by 8 nm - 1.3 cm on the screen, reducing to 3 nm - 0.5 cm on the screen just before the TCAS TA had been received, with the target data flags (both showing altitude) overlapping each other as the aircraft passed.

The general issue of "busy flight training areas" where upper air exercises are conducted was considered by the Investigation. It was observed that:

In Canada, there are a few methods used to address this risk. One method involves placing a training aircraft symbol in the general vicinity of the training area on the applicable VFR navigation chart (VNC) and terminal area chart (TAC). This symbol serves to notify transiting VFR aircraft to be on heightened alert, given the possibility of unpredictable training aircraft in the area. The symbols do not have a defined area, are not depicted on IFR enroute low-altitude charts, and are not generally known to the area control centre (ACC) controllers responsible for the particular sector.

Another method involves establishing a block of airspace designated as Class F Special Use Advisory Airspace (CYA). These defined blocks of airspace are ....depicted on both VFR and IFR charts. The blocks often have associated common frequencies and hours of operation, and are known to the relevant ATC units. ACC controllers will not generally route an IFR aircraft through an active CYA."

The Sault College Flight Training Unit (FTU) was found to operate a training fleet comprised of 11 single-engine and two twin-engine aircraft. It had published details of "specific designated training areas" in order to de-conflict their own simultaneous training flights from each other and had also issued instructions on "where some specific training manoeuvres could and could not take place" but none of this was known to ATC and it did not provide any guidance on the use of the specified areas for upper air work.

Data demonstrating the risk of collision in the Sault St Marie areas was identified as including 15 TCAS RAs "resulting from a risk of collision between an IFR and a VFR aircraft" held in the Transport Canada Occurrence Reporting System for the previous 10 years with "at least 7 of those occurrences involved aircraft operated by Sault College". The College itself had recorded "15 events identified as near miss, close call, or risk of collision" since 2013 with "all 15 of these reports involving 2 VFR aircraft, occasionally 2 Sault College aircraft".

In seeking to understand why the light aircraft pilots had failed to notice the proximity below of the DHC8 when carrying out a clearing turn prior to commencing their second spin, it was found that this turn had been combined with a climb to regain altitude which "would have placed (the aircraft) in a nose-high attitude". Failure to sight was considered to be attributable "possibly....to (the position of the DHC8) below the aircraft nose or wing, or due to a lack of anticipation". It was also noted that "given their experience with previously completing upper air work in this area without conflict, the student and instructor did not anticipate spotting a departing IFR aircraft during their scan of traffic in the area prior to the spin."

The failure of the ACC controller to notice the potential conflict was considered "possibly due to a combination of clutter between radar targets, dimness of display, and expectation of a lower altitude for the training aircraft".

The absence of a Class F Special Use Advisory Airspace (CYA) Training Area near to Sault Ste Marie was considered significant and it was concluded that "if manoeuvres related to flight training take place in controlled airspace that is not specifically designated for such training or known to ATC, there is an increased risk of collision, as these types of manoeuvres can be difficult for controllers or the crews of conflicting traffic to anticipate".

The formal documentation of Findings from the Investigation was as follows:

Safety Action taken by Sault College FTU during the course of the Investigation was noted to have included the introduction of a new procedure requiring their aircraft to "notify Sault Ste. Marie TWR once within 10 nm of the CTZ if/when doing spins", to "not do any spins within the departure/approach paths of any aerodromes in the surrounding area" and to "contact Toronto ACC when completing exercises in the (Sault Ste. Marie) VOR area".

The Final Report was authorised for release on 23 September 2015 and officially released on 15 October 2015. No Safety Recommendations were issued.