On 7 February 2011 two Air Inuit DHC8s came into head-to-head conflict en route over the eastern shoreline of Hudson Bay in non radar Class A airspace when one of them deviated from its cleared level towards the other which had been assigned the level 1000 feet below. The subsequent investigation found that an inappropriate FD mode had been used to maintain the assigned level of the deviating aircraft and noted deficiencies at the Operator in both TCAS pilot training and aircraft defect reporting as well as a variation in altitude alerting systems fitted to aircraft in the DHC8 fleet.

On 7 February 2011, a Bombardier DHC8-100 being operated by Air Inuit on a scheduled domestic passenger flight in day Visual Meteorological Conditions (VMC) from La Grande-Rivière north to Puvirnituq failed to maintain its cleared flight level and descended without pilot awareness towards a DHC8-300 also being operated by Air Inuit on a positioning flight in exactly the opposite direction, from Puvirnituq south to La Grande-Rivière at a cleared level 1000 feet below. Co-ordinated Airborne Collision Avoidance System (ACAS) RAs alerted the flight crews to the potential conflict but both pilots acting as PF initially reacted by making turns rather than by following their RAs. Once the RAs were followed, adequate separation was achieved. None of the respective 31 and 3 occupants were injured.

An Investigation was carried out by the TSB. The FDRs were downloaded but the limited parameters recorded meant that the data available as a result was of little assistance. Both 30 minute CVRs were overwritten and it appears that neither TCAS unit non volatile memory (NVM) record was read, although there is no explanation of why this useful and simple action was not taken.

All four pilots involved were noted to have been experienced overall in proportion to their rank but both pilots operating the southbound aircraft had low DHC8 type experience, although not so low as to preclude pairing.

Both flights were operating on Instrument Flight Rules (IFR) FPLs and the southbound aircraft was airborne ten minutes before the northbound one. By the time they began to approach their passing point, both were at their cruise levels in accordance with ATC instructions, the southbound aircraft at FL 220 and the northbound one at FL230. The conflict occurred outside radar cover in Class ‘A’ airspace with the AP engaged on both aircraft. The approximate tracks and the location of the passing point are shown on the diagram below taken from the Official Report. 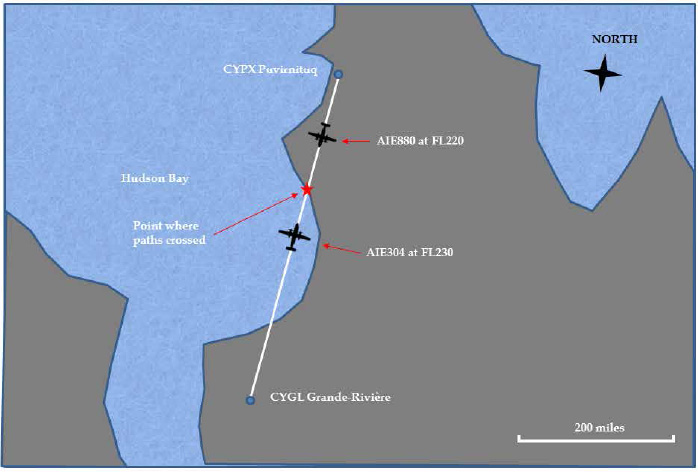 Due to recurring aircraft pitch oscillations when the autopilot’s ALT HOLD mode was selected, the flight crew of the northbound aircraft decided to engage VS as a means to maintain their cleared altitude of FL 230. During the flight, the First Officer, who had been acting as PF, left the flight deck for an extended ‘toilet visit’ and the aircraft commander took over as PF. Whilst the First Officer was absent, the aircraft began a slow descent which was not noticed by the aircraft commander who remained alone in the flight deck. The aircraft lost just over 700 feet of altitude over a 14-minute period - a mean rate of descent of approximately 50 fpm. Although the aircraft commander reported that he had visually scanned the instruments sporadically, he stated that his attention had been “largely focused outside as he contemplated the landscape of the eastern coast of Hudson Bay”. When this un-noticed descent began, the opposite direction aircraft at FL220 was about 130 nm ahead. Upon return to the flight deck, the First Officer saw on entering that the TCAS traffic display on the VSI was indicating a target straight ahead and slightly to the right. A TCAS TA was then heard followed by a TCAS ‘CLIMB’ RA. Before the First Officer could take their seat, the commander disconnected the AP and initiated a steep turn to the right, banking up to 38°. During this turn, the aircraft lost just over 50 feet in altitude before beginning to climb in accordance with the RA and stopping the turn.

In the southbound aircraft, the First Officer who was PF noted the TCAS TA, disconnected the AP and made a shallow turn to the right with a small loss of altitude. When the TCAS RA ‘DESCEND’ was annunciated, he began a shallow climbing turn to the left before being warned by the aircraft commander to halt the turn and begin descending as required by the TCAS RA. The First Officer subsequently stated that he “believed that the visual indication on the VSI was recommending the turn”.

Following the two delayed RA responses, the aircraft passed each other with a separation which was estimated from FDR data to have been of the order of 1500 feet vertically and 0.8 nm laterally before returning to their respective cleared levels.

In view of the poor TCAS RA responses, the Investigation examined the situation at Air Inuit in relation to mandatory TCAS training. It found that there was no provision for TCAS training in either initial or recurrent aircraft type ground training. However, “according to the company training program, when the pilot is hired, ground training on the operation and use of TCAS is provided during the company’s orientation training”. The aircraft commander who mishandled the TCAS RA on the southbound aircraft was found to have been employed by the company since 1990 at which time no Company aircraft were equipped with TCAS. During recurrent ground training in 2010, a CD containing a self-study program was reported to have been provided to pilots but “There is no record that this self-paced study program was completed by either of the pilots who mishandled the TCAS TAs in this Incident”. In the case of the other two pilots, this program appeared to have been completed in February 2010.

In respect of the use of VS mode as a means to maintain level flight, it was noted that:

“pitch oscillations when the autopilot was engaged had been observed in the past, not only by this crew or on this particular aircraft, but on other DHC-8s of the company. Nothing indicates that this situation had been formally pointed out to the company’s maintenance personnel, such as by means of an entry in the aircraft logbook”.

It was also noted that some, but not all, of the DHC8 fleet at Air Inuit had an audible alert in the case of deviation from the selected altitude. The southbound aircraft which in this event failed to maintain its assigned level was not fitted with an audible alert and it was considered possible that the commander “expected to hear an audible warning if the aircraft deviated in altitude for any reason”.

The Investigation Findings included the following in relation to Cause and Contributing Factors:

In respect of Risk, the Investigation findings included:

The Final Report of the Investigation Aviation Investigation Report A11Q0028 was authorised for release by the TSB on 20 June 2012 and released on 21 August 2012.