On 12 October 2016, a BN2 Islander and a Bombardier DHC8-200 were involved in a near miss after the DHC8 took off from a runway which intersected with the runway on which the BN2 was about to land. The BN2 broke off its approach just before touchdown when the DHC8 was observed accelerating towards the runway intersection on its take-off roll. The Investigation noted that the aerodrome involved relied on visual separation and use of a CTAF and found that although both aircraft were aware of each other, the DHC8 crew failed to fully utilise visual lookout.

On 12 October 2016, a Pilatus Britten-Norman BN2-A Islander (VH-IOA) being operated by Cape Air Transport on a passenger charter flight from Kubin to Horn Island had to discontinue its approach just before touchdown in day VMC when a Bombardier DHC8-200 (VH-ZZJ) being operated by Cobham Air Services on an aerial survey flight commenced its take-off from an intersecting runway. The two aircraft were in close proximity as the DHC8 made its initial climb close to the BN2 which had turned left to avoid the extended centreline of the runway from which the DHC8 was departing.

An Investigation was carried out by the Australian Transport Safety Bureau (ATSB). It was established that both the aircraft involved were operating under IFR but that the airspace involved was Class 'G' with a CTAF (common traffic advisory frequency) designated for the airspace within 40 nm of Horn Island from the surface to 8,500 feet. Kubin was (well) within the CTAF boundary.

It was established that the BN2 had broadcast its departure from Kubin for the 16nm flight to Horn Island on the CTAF. At this time its Pilot noted that another company aircraft had just departed from nearby Badu Island and was also heading for Horn Island. En route, he heard the Pilot of this other inbound aircraft advising that he would join the runway 08 circuit at Horn Island behind an aircraft making training circuits to that runway. Because both the BN2 and the DHC8 were operating under IFR, the Area Controller then passed information to the BN2 about the impending departure from Horn Island of the DHC8 even though neither aircraft was within controlled airspace.

The BN2 pilot planned for a straight approach to runway 14 - a landing-only runway due to adverse terrain beyond the far end - and continued making all the required CTAF arrival radio calls including position calls at 10 nm, 5 nm and 3 nm prior to joining final approach. Meanwhile, the DHC8 First Officer broadcast his aircraft's entry and backtracking of runway 14 and intention to take off from runway 14 and held short of runway 08 to allow the aircraft doing circuits to complete a touch and go. Whilst backtracking, the DHC8 crew heard a CTAF call from the aircraft inbound from Badu Island that it would be joining the runway 08 circuit No 2 to the training aircraft in that pattern. They then noticed another aircraft (the BN2) on their TCAS display and in response to a query to it were told by its Pilot that he was "approaching a 3 nm final for runway 14 and that they would have time to depart from runway 08 if they were quick". At about this time, the DHC8 was reaching the beginning of runway 08 and the aircraft was lined up for departure whilst the short pre take-off checklist was completed. The CTAF frequency was briefly occupied by communication between two distant aircraft and by the time BN2 pilot heard the DHC8 broadcast "rolling for departure from runway 08", he was "at about 400 feet on final approach for runway 14". He subsequently stated that at about 300 feet, he had broadcast "hold short" to the DHC8 but the DHC8 Captain reported he had heard this transmission as "land and hold short of runway 08" and so had continued the take-off’. As the BN2 approached 100-150 feet on final approach, the DHC8 had still not crossed the runway intersection and so its Pilot broke off the approach and commenced a climbing left hand turn away from the runway and keeping clear of runway 08 and its extended centreline so as to join downwind for a landing on runway 08. The Captain of the DHC8 reported looking out of his left window as the aircraft made its initial climb overhead the threshold of runway 26 and seeing the BN2 "turning through east at about the same level". The annotated diagram below shows the relative ground tracks of the two aircraft. 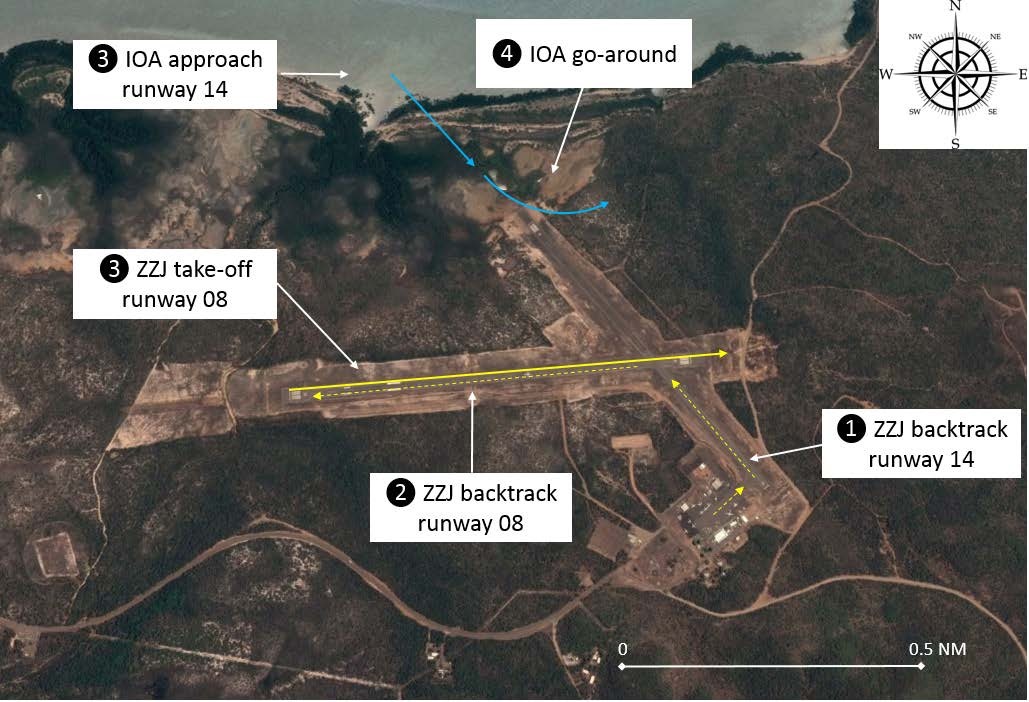 The two aircraft ground tracks superimposed on an aerial view of the aerodrome. [Reproduced from the Official Report]

The Investigation noted that operations at Horn Island are constrained by high terrain to the south east of the aerodrome. As a consequence, take-offs from runway 14 and landings on runway 32 are not permitted and local operators of smaller aircraft generally depart from runway 08 and land on runway 14 whilst larger aircraft such as the DHC8 use the slightly longer runway 08 for both take-off and landing.

It also noted that the right of way rules under Australian Civil Aviation Regulation (CAR) 162 state that "an aircraft that is about to take-off shall not attempt to do so until there is no apparent risk of collision with other aircraft". The Captain of the DHC8 stated to the Investigation that they had started their take-off before visually sighting the BN2 after having "relied too heavily on their TCAS" after failing to "place sufficient importance on the ‘see’ element within the ‘see-and-avoid’ philosophy of operations at non-controlled aerodromes". The Captain remarked that their use of the TCAS display for traffic awareness prior to beginning take-off had been with it set to a 12 nm range whereas a 6 nm range would have been more appropriate and the Investigation concurred. The timing of the misheard BN2 Pilot transmission to hold short of his landing runway in relation to the point at which the DHC8 passed V1 could not be determined.

Findings from the Investigation were formally documented as follows:

The Final Report was published on 9 February 2017. No Safety Recommendations were made.